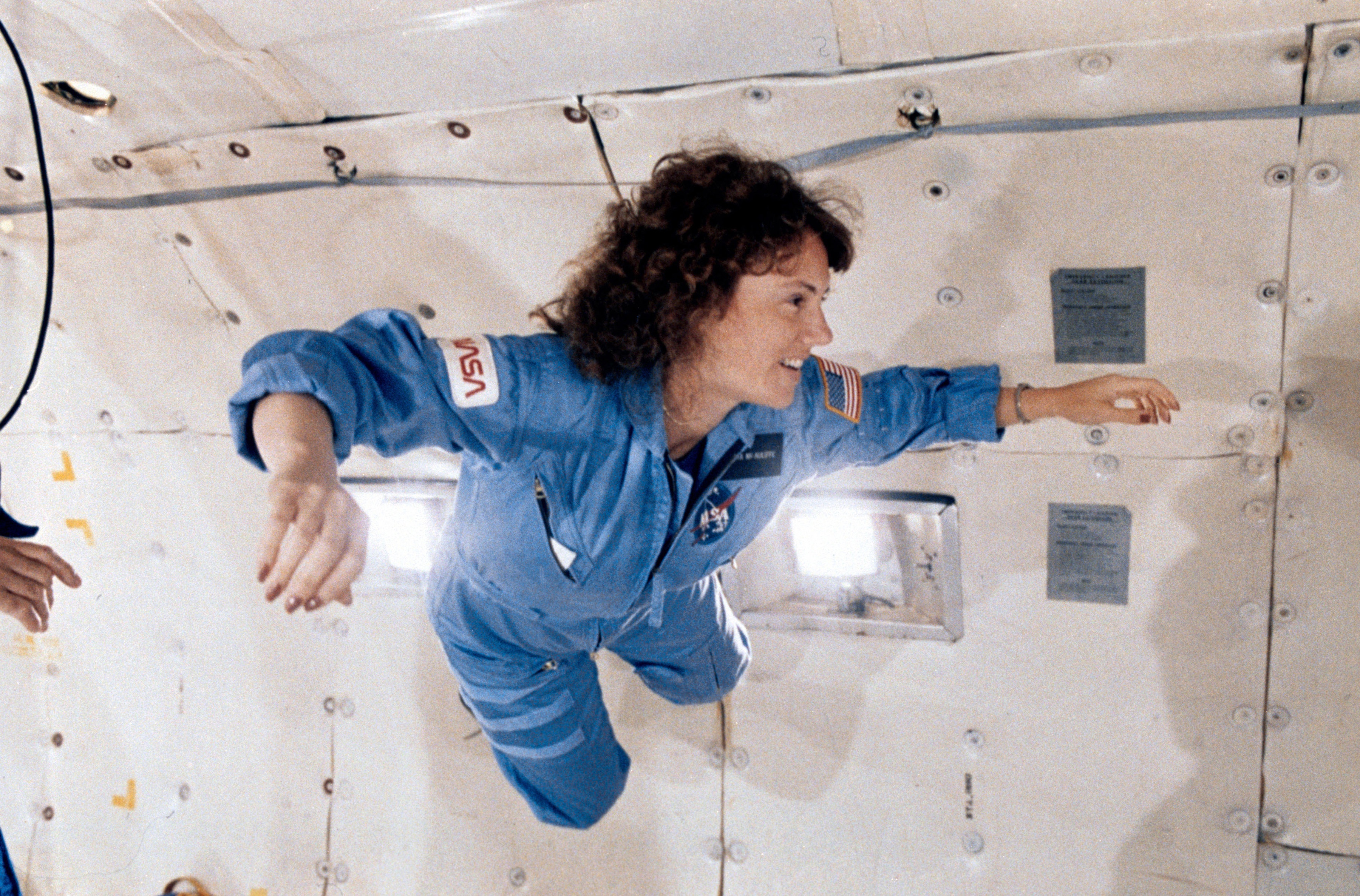 Teachers can make our synapses dance. We have all had at least one. They boot up wonder, the operating system that triggers the brain’s hardware. They are the role models who supply hungry young minds with vitamin-rich mental nutrients. Now, a new initiative led by the nonprofit STEM (science, technology, engineering, math) robotics community FIRST, aims to recognize our nation’s teachers for the inspiration, mentorship, and lifelong impact they have on students.

Before her life was tragically cut short, Christa McAuliffe was that special kind of educator. As a history, civics, economics and social studies teacher, she was always showcasing and instilling her own hunger for discovery. Her Concord, New Hampshire-students were over the moon when McAuliffe applied to be the first participant in NASA’s Teacher in Space Program in 1985.

“She made herself so real to us,” recalls Kristin Jacques, McAuliffe’s former student who now teaches fifth grade at Maple Street Elementary in Hopkinton, New Hampshire. “She told us she had to run out late at night in her pajamas and bathrobe to get to the post office so her application was postmarked by the correct date. Her message was: some of you procrastinate on your homework. We all procrastinate. But we get things done.”

And McAuliffe did. She was selected from over 11,000 applicants for the new NASA endeavor to travel to space onboard the space shuttle Challenger.

From that moment on, she brought her students into the experience, says Tammy Hickey, who also studied under McAuliffe in Concord. Teaching by example, she encouraged the young people in her classroom to pursue knowledge and careers in education, space—whatever sparked their curiosity. And although she taught mainly on the arts side of the curriculum, her fascination with STEM knew no bounds. 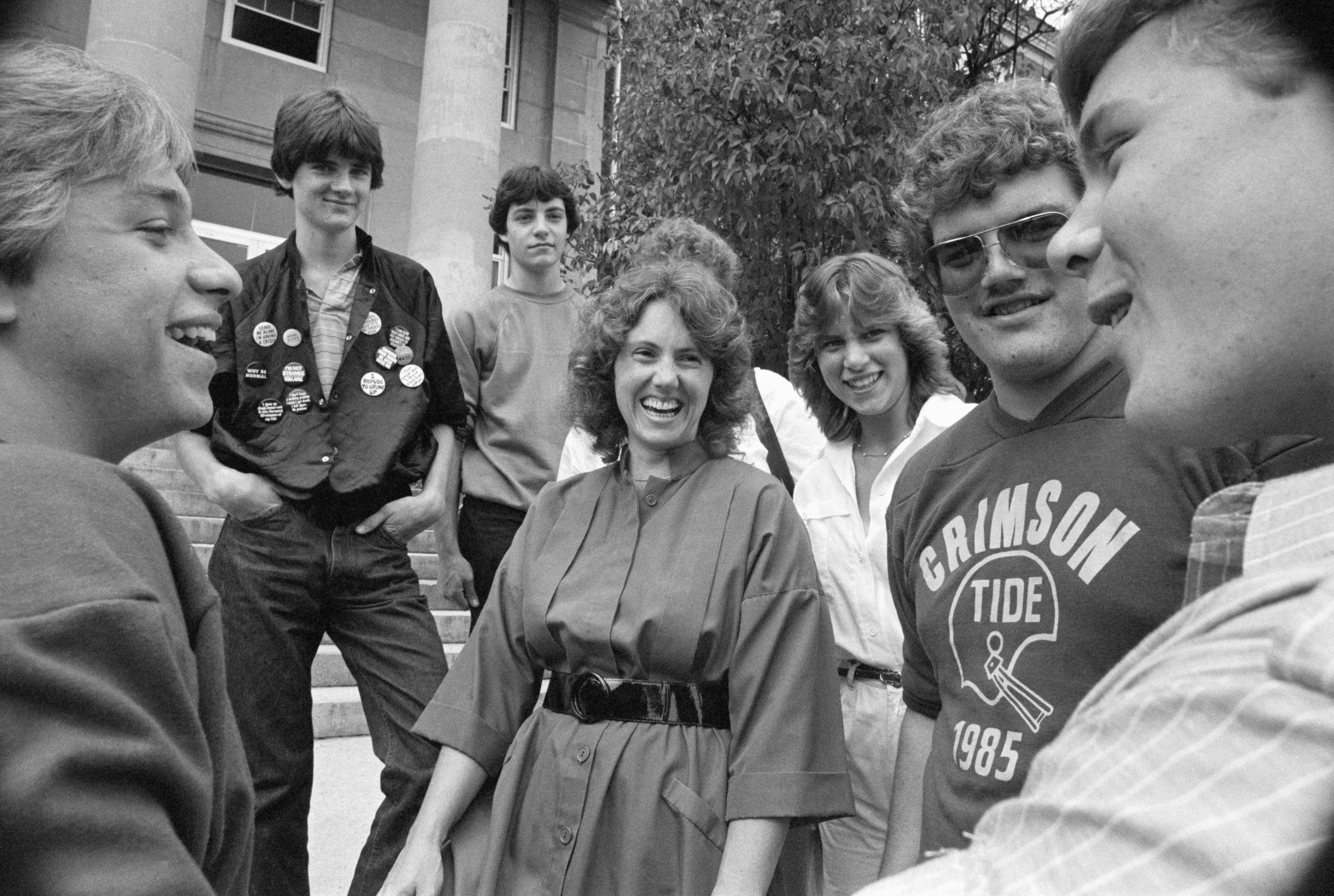 Christa McAuliffe inspired teachers and students alike. To commemorate her legacy, the U.S. Mint issued the Christa McAuliffe Silver Dollar, with a portion of proceeds benefitting the robotics community FIRST.

“She brought her enthusiasm into the classroom, getting us so involved in everything she went through as she trained for the mission,” says Hickey, who now teaches physical education at Buffalo County Middle School in Manatee County, Florida. “She brought in space ice cream for us to try. She showed us how the toilets worked on the shuttles and made that funny. It was always fun to learn with her.”

Her humanity, of course, made a well-documented tragedy all the more painful. On January 28, 1986, the space shuttle Challenger she boarded so eagerly exploded 73 seconds after liftoff, killing all seven crew members.

Decades later, her legacy lives in every schoolroom where passionate educators like Jacques and Hickey make an incredible impact, as they inspire, challenge and motivate each new generation of students. To commemorate that legacy, the United States Mint has issued the Christa McAuliffe Silver Dollar, released on the 35th anniversary of the disaster and available for purchase. It is the first coin to honor a teacher. 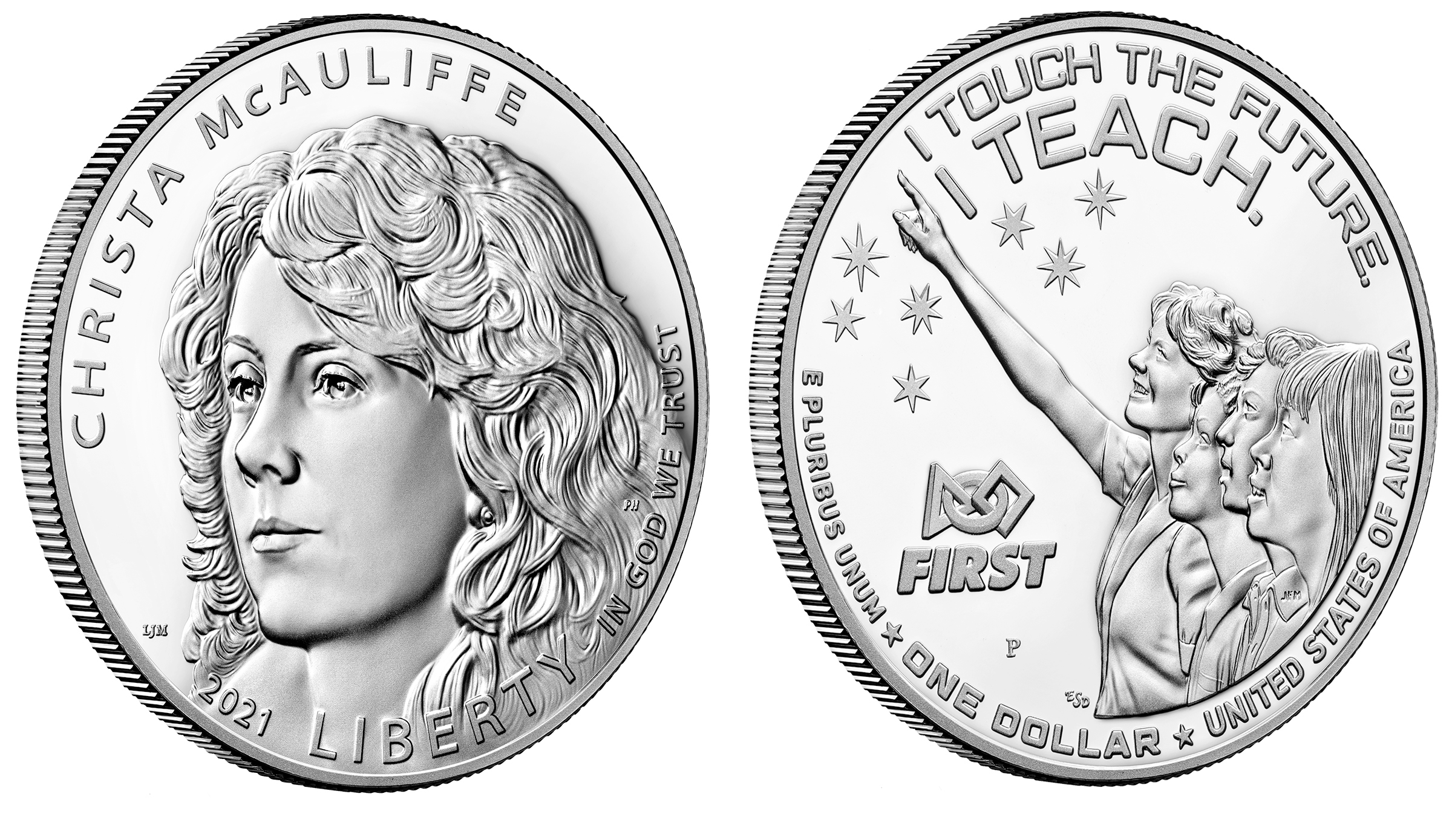 The Christa McAuliffe Silver Dollar celebrates all teachers and mentors who carry on her important mission to inspire and empower the next generation.

At FIRST, STEM is Foremost

The 2021 commemorative coin is also meant to celebrate all teachers and mentors. And it represents years of advocacy on the part of FIRST. As a nonprofit with a bold mission to inspire young people to be science and technology leaders and innovators, FIRST programs employ well-tested techniques for engaging every young person from pre-kindergarten to grade 12, such as hands-on learning, team building, and creative problem-solving.

The Christa McAuliffe Silver Dollar will help raise funds for FIRST initiatives that have already had a life-changing impact on students, furthering its reach and impact worldwide. Jenna Kay Foertsch, a FIRST alum, once wandered into a robot-building workshop at her high school in Burnsville, Minnesota and never looked back.

Today, Foertsch, a self-proclaimed space evangelist, has realized her dream. She works for an aerospace organization where she supports an office that focuses on planning, integration and environmental concerns. She also now serves as a mentor for the Robonauts, a district-wide high school FIRST team.

“The best teachers I’ve had really want to see us blossom and become successful,” says Foertsch. “But some of the greatest lessons I’ve learned didn’t take place in class. They happened in the hallways and after class when I came to teachers looking for advice.

“And the people who guided me in that high school robotics team were so helpful. I stay in contact with them today. It all came together for me there. The experience proved to be a perfect mix of all my interests—STEM, business, education and communications—and now I’m paying it forward by becoming a mentor myself.”

“Every Kid Can Go Pro”

“Rather than be daunted by the opportunity, Christa seized it with both hands. She saw herself as a representative for all teachers,” says Kamen. “FIRST is all about the idea that anyone, regardless of background, gender, ethnicity or upbringing, is capable of doing and being more. Education and experience can give them the tools they’ll need to get there. I founded FIRST to create inspiration and recognition of science and technology. Christa embodied this in everything she did."

Kamen’s passion for keeping McAuliffe’s legacy alive is rooted in his personal connection to the teacher’s story. In late 1985, the government of New Hampshire commissioned his late father, Jack, a famed graphic artist, to attend the launch and make an illustration of the Challenger takeoff for posterity. After witnessing the tragedy—and on Dean’s urging—Jack drew a concept for a commemorative coin. This rendering was attached to the congressional bill as it went through the legislative process for many years. 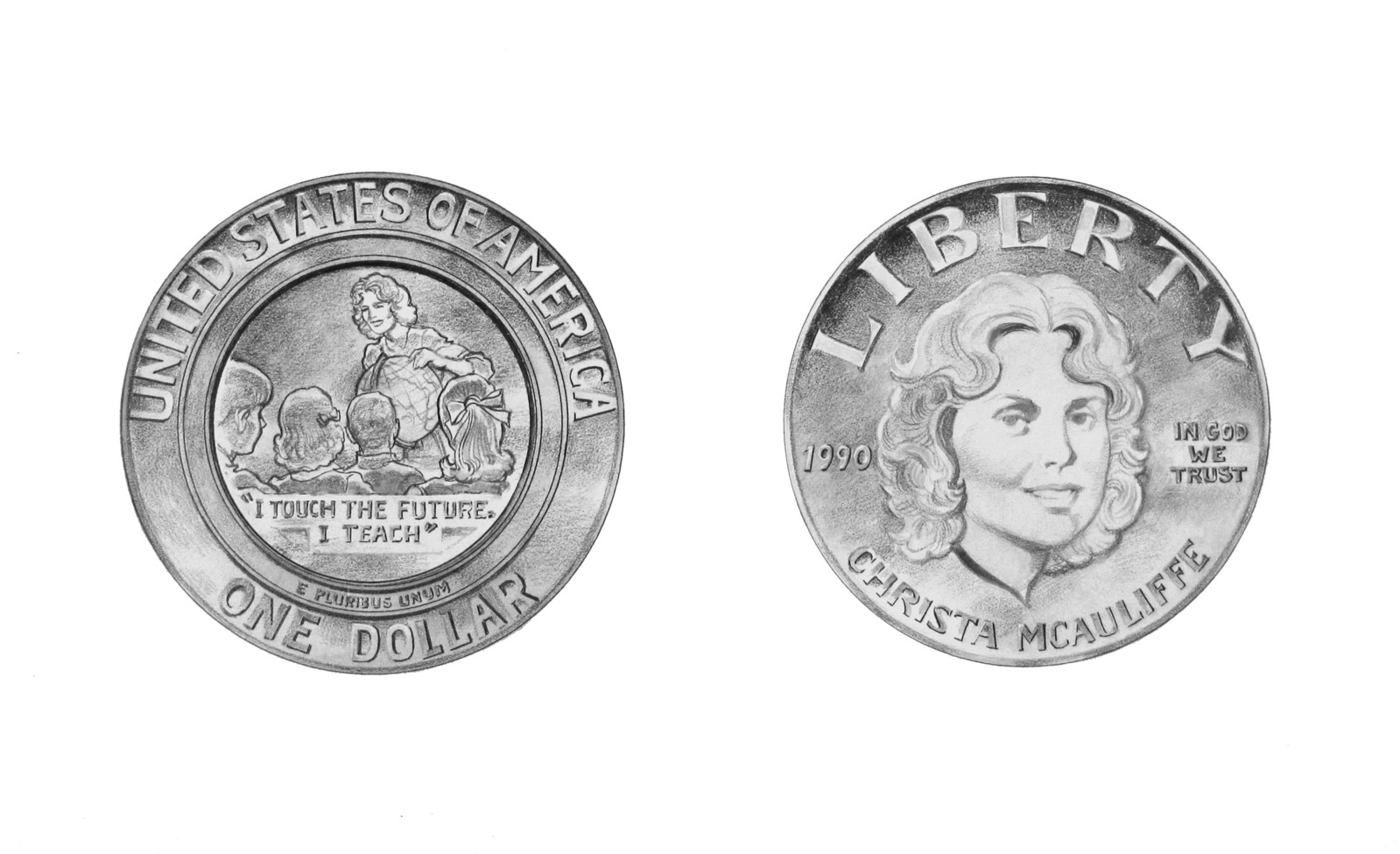 Jack Kamen, father of FIRST founder Dean Kamen, was a famed illustrator who drew the concept art that would be used to help pass the commemorative coin’s congressional bill.

Dean Kamen says McAuliffe is an ideal representative of the work that FIRST does.

“Christa had an unabashed love of learning, plus a love of helping other people learn,” he says. “It’s so gratifying to finally see her legacy honored in this way. Every time I see the coin, I think not only of Christa, but of the millions of teachers around the world who are carrying on her critically important mission to inspire and empower the next generation. I’m proud that this coin represents Christa’s legacy and the FIRST mission of inspiring future innovators who will follow in her trailblazing footsteps.”

For teachers like Kristin Jacques, what McAuliffe instilled in her plays out each day in the classroom.

“I want my students to know that they are valued for all their strengths,” she says. “Maybe they’re not the best reader. But you really have to look at them as a whole person. Talk to them daily about what they did well, no matter how small it is. Value them for who they are. Christa taught me that and I will always be grateful.” 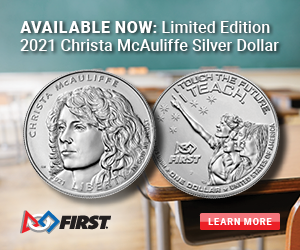