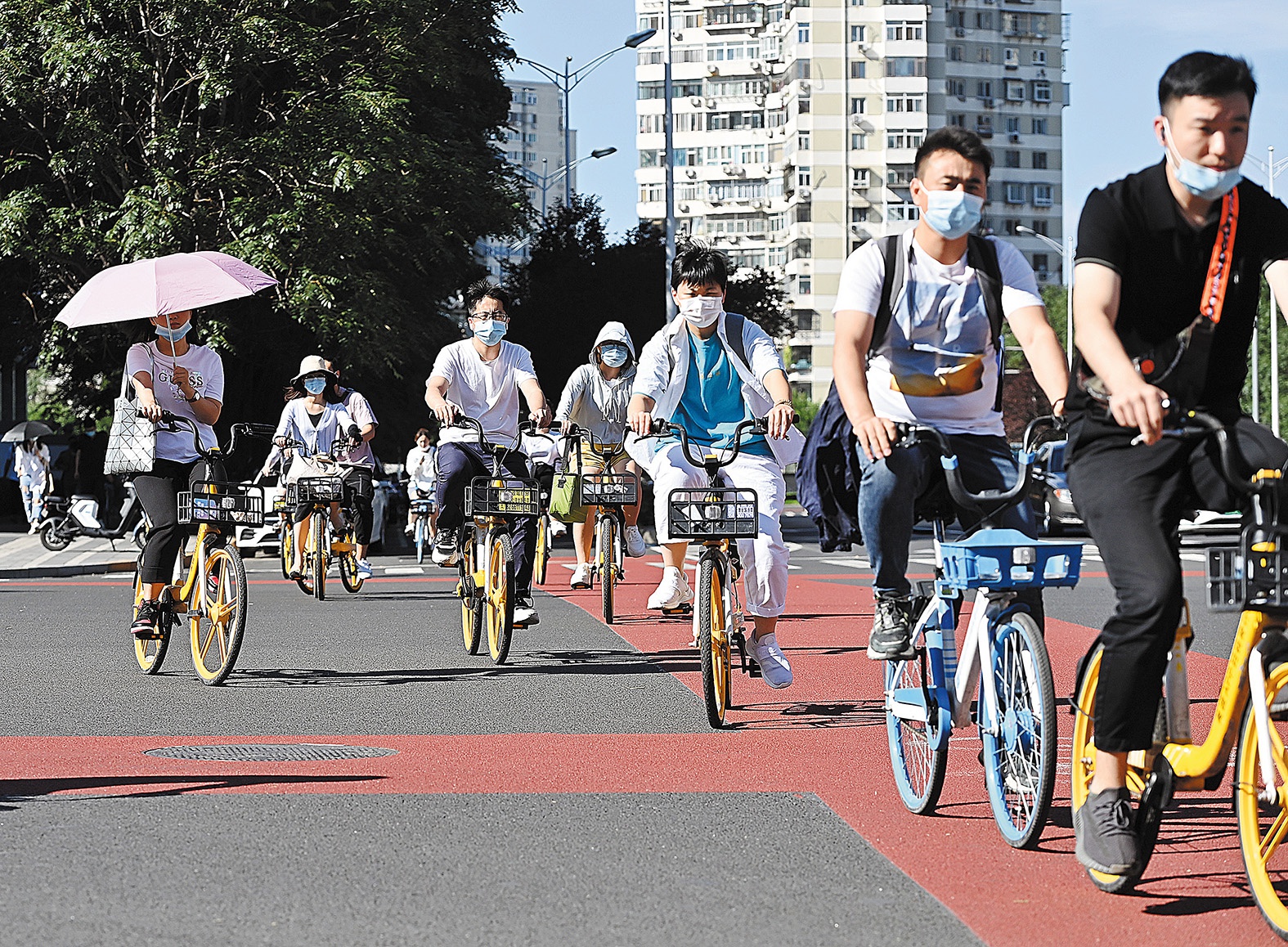 For cycling enthusiast Jia Feng, riding to work in Beijing allows him to get in his daily exercise and frees him from the capital’s notorious traffic jams.

But cycling is not always a joyful experience. The occasional takeover by cars — the number of which rose by almost 5 million over the past 20 years to 6.57 million by the end of last year — of cycling lanes left him with conflicted feelings about life in the saddle.

Of late though, the Beijing resident has found that commuting is becoming increasingly enjoyable as local authorities endeavor to encourage environmentally friendly travel in the midst of a national campaign to promote green transition.

Residents near the capital’s Second Ring Road were surprised to discover that cycling lanes appeared to have been widened. A closer look revealed what had happened recently.

The Beijing Municipal Commission of Transport says the capital plans to widen bicycle lanes along every section of the Second Ring Road from 6.6 ft. to at least 9.8 ft.

Other efforts are underway to return Beijing to the reputation it once enjoyed as a cycling capital.

Authorities have managed to renovate more than 1,864 miles of bicycle lanes in the past five years, either by widening or by removing parking lots that infringed on them, said Jing Lubo, an official at the commission’s urban road management, adding that as a result the proportion of trips made by bikes in the capital has risen from 39.3% to 46.7%.

Last year, with the Beijing Traffic Management Bureau, the commission set up multiple pilot programs to promote commuting by bicycle. First, road signs for bicycles were put up along some side roads, and five special traffic lights were installed to make it easier for cyclists to turn left at crossings.

The municipal government also plans to build bike routes along 12 waterways, which will help connect cycling networks between the Second and Fourth Ring roads and create a green transportation network.

Jia, 58, a public servant who used to ride to work a decade ago, began to commute by car as the number of vehicles in Beijing rose, despite his office being only 4.3 miles from home.

He went back to cycling last year. He had stopped swimming three times a week and chose to ride to work as an alternative form of exercise.

After cycling to work for the past 13 months Jia has found that it is a much better way of commuting.

“I have ridden more than 3,728 miles and I feel really good. First of all, I am healthier, and a number of physical indicators have improved.”

Cycling has saved him time and money as well, he said.

Despite occasional trouble from cars, Jia said, traffic conditions for bikes have changed for the better thanks to the effort by the municipal authorities to improve the cycling network.

In addition, Beijing authorities also introduced an incentive program to encourage residents to commute by bike in late 2019.

By registering with Baidu Map or Gaode Map, residents are given a special low-carbon account. They win credits when they use the maps to walk or ride to their destinations. Using public transportation is also rewarded with credits.

The credits can be exchanged for coupons and access to some online platforms that normally require paid subscriptions. Users can also donate the credits toward tree planting or bridge construction for public welfare, and those with top rankings may be lucky enough to sell their credits on the capital’s carbon market.

The program has attracted more than 24 million users, and the trips they have made have helped reduce carbon dioxide emissions by about 28,000 metric tons, Zhao Zilong, deputy head of the Beijing Municipal Commission of Transport, said at a cycling publicity event on Earth Day this year.