During the 1970s and ‘80s, a fertility specialist in Indiana named Dr. Donald Cline inseminated dozens of patients with his own sperm, without their knowledge or consent. The stories of some of these women and the (at least) 94 biological children of Cline are told in a new documentary, Our Father, which premiered on Netflix in May.

The film, which features interviews with the parents and their children, as well as others close to the situation, chronicles the siblings’ path to uncovering the truth of their biological parentage, and spotlights their fury and resolve as they failed to see Cline answer for his crimes in court. In a moment when the right to safe and informed reproductive care is under threat in the U.S., Our Father is particularly resonant given the questions it raises about how our legal system views those seeking control over their own reproductive choices, and restitution when that autonomy is violated.

Here’s what to know about Our Father.

How one woman discovered she had dozens of half-siblings

Jacoba Ballard’s life changed after she took an at-home DNA test and learned she had seven half-siblings. After reaching out to her newfound family members and researching the mystery of their shared relation, Ballard and her siblings soon discovered with horror what their parents’ trusted doctor had done. The number of confirmed siblings continued to grow as more people added their DNA to 23andMe’s database. Each time she saw a new connection appear on her profile, she’d steel herself before reaching out to deliver the news. “I know I’m going to call them and I’m going to ruin their life,” she says in the documentary.

“It just completely washes away your identity,” Julie Harmon, another sibling, says. “You really have no idea who you are anymore.”

Our Father includes interviews with eight of the 94 siblings. Because of Cline’s lack of cooperation and the unknown number of patients he had the opportunity to inseminate up until he stopped practicing in 2009, there is no way to know for sure how many siblings there may be.

Julie Harmon in Our Father
Courtesy of Netflix

Our Father alleges Donald Cline was motivated by religion

Our Father suggests Cline may have been motivated by ideology born of his affiliation with an extremist Christian sect called “Quiverfull,” which encourages followers to reproduce as prolifically as possible to meet God’s mandate to “be fruitful and multiply,” and install adherents in positions of power. Surveying the blonde hair and blue eyes of many of Cline’s offspring, the film briefly meditates on whether Cline’s crusade may have had white supremacist underpinnings (Quiverfull ideology, which promotes patriarchal gender ideology and other conservative ideals and bemoans European population decline, certainly seems to).

The film emphasizes how Cline’s faith, which developed after he accidentally struck and killed a young girl with his car, pervaded his practice as a doctor. He had his staff recite prayers together, advised patients to pray on their treatment choices, decorated his office with Christian sayings, and had an affinity for the verse Jeremiah 1:5 (“Before I formed you in your mother’s womb I knew you.”), which is often featured in material extoling the Quiverfull lifestyle. Cline has not publicly acknowledged or commented ties to the tradition.

A lack of justice for the victims

Our Father’s main focus is on highlighting the lack of legal recourse afforded to the siblings and their parents. By the time the children of Cline’s former patients began to uncover the extent of his crimes in 2015, he was well into retirement, living in Indianapolis, Indiana. They contacted the offices of the Marion County prosecutor and attorney general of Indiana, asserting Cline’s medical practices were tantamount to rape and asking for an investigation, but proceedings were slow, much to their frustration.

As the siblings waited for authorities to take action, Cline lived as a pillar of the community and an elder of his church, performing baptisms in his backyard swimming pool. He also began obliquely threatening the siblings with retribution should they continue their effort to bring charges against him and take their story public. The lug nuts disappeared off Ballard’s car one day, she shares in the film. Harmon says she found her hard drive suddenly wiped clean of all mention of Cline, and all of her research vanished overnight. Another sibling, Heather Woock, who shared her story publicly, began receiving phone calls pointedly inquiring if she was interested in purchasing a cemetery plot.

Jacoba Ballard in Our Father
Courtesy of Netflix

When the county prosecutors finally investigated Cline, the results were disappointing to the siblings, the women he inseminated, and their families. They had hoped an investigation into his medical practices would yield sufficient evidence to bring charges of rape. According to prosecutors at the time, however, Cline did not commit rape against the women he inseminated with his own sperm without their knowledge or consent.

“I don’t deny that it was a sexual violation, [but] ‘Dr. Cline committed rape,’ is a legal assertion that was not true, and I wasn’t going to put it on paper with my signature,” Tim Delaney, who was working in the prosecutor’s office in 2015, says in the film. “The individuals touched by this were very emotional and had a feeling I [was there] to deliver catharsis. I wasn’t.”

“I was raped 15 times and didn’t even know it,” former Cline patient Liz White says during her interview, a wrenching counterpoint. “There was no consent. He didn’t give me a choice.”

The filmmakers behind Our Father, including director/producer Lucie Jourdan, say they were moved to tell the story of the siblings and their parents in order to help them condemn Cline’s actions to a broad audience when it became clear the court had failed.

As is often and infuriatingly the case in the U.S. justice system, in order to pursue Cline for the crime he had committed, it was necessary to prosecute him for something else. In 2017, he was brought to trial facing two counts of felony obstruction of justice, for lying during the investigation. The obstruction of justice charges meant that no evidence related to Cline’s actions toward his former patients was admissible—though those actions constituted the injustice for which the siblings and their parents were truly seeking restitution. Cline pled guilty, and received two suspended sentences (meaning he served no jail time), and a $500 fine.

Our Father tells the story of a violation so apparently novel that until the siblings and parents affected by Cline’s crimes brought their case to court and lobbied for protections, there was no law prohibiting his actions. In 2018, the siblings’ lobbying, led by Matt White and his mother Liz White, contributed to the passing of Indiana’s fertility-fraud law. There is still no federal law on the subject.

While the story Our Father depicts is relatively unique, the violation of a person’s ability to choose the circumstances under which they become pregnant, and the lack of legal protection of that ability, are not. Cline’s decision, seemingly motivated by extremist religious beliefs, was made by a person with power, on behalf of many without. Our Father ultimately succeeds in its mission of bringing the siblings’ story into the spotlight—and presciently emphasizes the fraught framework by which it is surrounded. 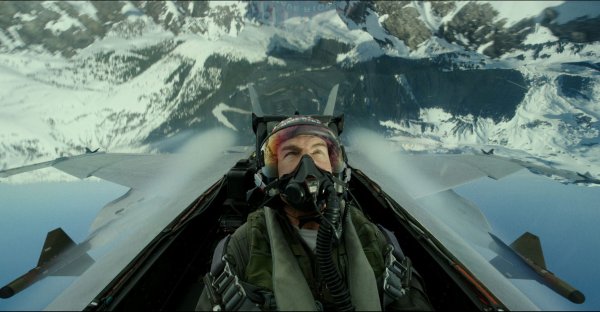 The New Top Gun Is So Much Better Than the First One
Next Up: Editor's Pick