Congress Is Close to Cracking Down on Big Tech. But Powerful Obstacles Remain

On the surface, the fight to rein in Big Tech appears to be building toward success in Washington. A bipartisan bill to curb the power of dominant tech platforms like Facebook, Google, Apple, and Amazon is poised to pass Congress, one of the bill’s chief sponsors, Rep. Ken Buck, tells TIME.

The Colorado Republican, one of the leading voices pushing for antitrust reform within the GOP, says the bill is almost ready for a floor vote. He expects the measure to make it to President Joe Biden’s desk by the end of the summer. “We’ve worked out language that I think is just about complete on it,” says Buck, the ranking member of the House Antitrust Subcommittee. “I anticipate that by the August recess, we will have passed that from both chambers.”

Beneath the veneer of progress, however, powerful forces are at work—and success for anti-monopoly lawmakers is far from guaranteed, according to multiple sources familiar with the matter.

One obstacle standing in the way is opposition from the California delegation, much of which represents Silicon Valley. Both House leaders, Speaker Nancy Pelosi and Minority Leader Kevin McCarthy, are also from the state, which boasts the world’s fifth largest economy, driven largely by the tech sector. Another challenge is the multi-million-dollar lobbying campaign from the tech giants to scare lawmakers away from breaking up their enormous market power. The task of whipping votes for the bill is made all the more difficult by the fact that the current Congress is the oldest in American history; many members are geriatrics who struggle to fully grasp the implications of tech. (Some of them still use flip phones.) Lastly, there’s Chuck Schumer, who publicly supports the bill, but who sources worry may be playing into the tech companies’ strategy of running out the clock.

If the legislation doesn’t pass before August 8, when Congress breaks for a month, there’s very little chance it will pass in the months before the midterms—and if the balance of power changes in Washington after the November elections, there’s no telling whether there will be another opportunity like this for lawmakers take on corporate monopolies.

In the short term, the fight is focused on one potential law: The American Innovation and Choice Online Act (AICO), which would prohibit platforms like Google and Amazon from giving preference to their own services over those of their competitors. The bill has already made it out of both the House and Senate Judiciary committees. In March, the Department of Justice endorsed the legislation, marking the Biden administration’s full backing of the measure.

That has only given more momentum to the bill’s champions, notably including Sen. Amy Klobuchar (D-MN) and Sen. Chuck Grassley (R-IA), who authored the Senate version. The legislation is “the first major bill on technology competition to advance in the Senate since the dawn of the Internet,” Klobuchar, chair of the Senate Antitrust Subcommittee, tells TIME. “I am working with my colleagues on both sides of the aisle to get this to a floor vote.”

Lawmakers have been fine-tuning the text in recent months to win over on-the-fence colleagues, who have expressed skepticism over the proposed crackdown on the tech behemoths. “There’s a lot of folks from California who are opposed,” Buck said. “On the Republican side, it’s a matter of talking to folks about the balance between the dangers that these monopolies pose versus having government involved in enforcing laws in the marketplace.”

Several legislators from the Golden State have been openly hostile to the effort, including Republicans Darrell Issa and Tom McClintock, and Democrats Zoe Lofgren, Eric Swallwell, and Lou Correa. In a joint statement last summer, the group said a suite of antitrust bills targeting Big Tech, including AICO, would pose “harm to American consumers and the U.S. economy.” Meanwhile, there’s also a growing concern on Capitol Hill that the privacy of Americans’ data could be at risk and that the new law could make it harder for tech companies to tamp down on Russian disinformation.

Pelosi, for her part, has broadly committed to moving on legislation to combat concentrated markets, in tech and beyond. “We’re not going to ignore the consolidation that has happened and the concern that exists on both sides of the aisle,” she said. McCarthy has come out in favor of another one of Buck’s bills—which would strengthen the antitrust enforcement capabilities of state attorneys general—but he hasn’t yet weighed in on the AICO legislation. His office did not respond to a request for comment.

Another concern for advocates lies in the gilded office of the Senate majority leader. Sources worry that Schumer is expressing rhetorical support for the measure but isn’t advocating for its passage with his signature alacrity.

“He’s saying to people like Klobuchar, ‘Hey, Amy, I love this. I want to get it to the floor. Let’s go get 60 votes,’” says a source familiar with the process. “But then there’s a handful enough of senators who are either noncommittal or not engaged or just giving a poker face—so the bill never makes it to the floor.”

One member of Congress, who requested anonymity to speak freely, added that it will be a challenge to get through a tango between Pelosi and Schumer, neither of whom, the member speculated, want to be the first to bring antitrust bills to a vote in their full chamber.

“My understanding from Klobuchar is that Schumer has promised to get at least some of these bills through,” the lawmaker said. “But what’s much more interesting is that Pelosi and Schumer are sort of playing this off against each other: Well, you know, they should go first, then we’ll take them up. But that’s the tough part. Because that’s the Big Tech strategy—to run the clock out.”

The more cynical anxiety among some staffers and anti-monopoly activists stems from Schumer’s two daughters working at Facebook and Amazon respectively.

Schumer’s office flatly denies such theories. “Sen. Schumer supports the Judiciary Committee passed legislation that promotes small businesses and innovation,” a spokesperson for the majority leader tells TIME. “He is working closely with Sen. Klobuchar and other Democratic and Republican members to get the necessary votes to pass it in the Senate.”

The spokesperson also pointed to the senator’s track record of shepherding anti-monopoly nominees and Big Tech antagonists to fill some of the most powerful watchdog roles in the federal government, such as Lina Khan as chair of the Federal Trade Commission and Jonathan Kanter as head of the DOJ’s Antitrust Division. The Senate is also expected to confirm Alvaro Bedoya to the FTC next week.

The last big chance to get something done

The AICO legislation may present one of the last big chances for this Congress to address the power of technology firms before campaign season ramps up. Republicans are overall less unified on the issue, and if they take back control of Capitol Hill as expected, the fate of legislation to strengthen the nation’s antitrust enforcement regime may hang in the balance.

The reason for hope lies in the underlying politics: all the rage on both sides of the aisle is against Big Tech—albeit for different reasons—and Democrats and Republicans may want to sell a deliverable to voters ahead of the midterms. This bill, in particular, could resonate with the American people, its advocates say. The new law would help small businesses and entrepreneurs by barring Amazon from giving preference to its own products. In other words, the Seattle-based company couldn’t put its own goods on page one of the platform’s search engine and its competitors’ on page sixteen. As Elizabeth Warren put it on the 2020 campaign trail, it could no longer act as an umpire in the game while sticking its thumb on the scale of its own team.

“For a lot of members of Congress, they want to be able to talk about what they’ve actually done to rein in tech and what they’ve done to help the small businesses in their districts, and this bill is a good plank to stand on,” says Chris Pedigo, senior vice president at Digital Context Next, a trade association that represents digital content providers, which lobbied in favor of the bill.

Buck’s victory forecast comes in the wake of increased resistance from Silicon Valley. Amazon and Google have unleashed millions on a massive lobbying effort to convince Congress that the legislation would inflict massive pain on American consumers. AICO, they have said, would spell the end of popular services such as Google Maps and Amazon Prime, which more than 150 million Americans use.

A group of former national security officials have also recently come out with a seven-figure ad blitz urging lawmakers to drop the legislation. “We can’t allow our adversaries to win the tech race,” Frances Townsend, a homeland security adviser under former President George W. Bush, tells viewers in one video. “If our leaders don’t change course, American citizens and businesses will become more dependent on authoritarian regimes for our technology.” The campaign is being run by an advocacy group funded by Meta (formerly known as Facebook, Inc.) and a constellation of lobbying groups bankrolled by Google and Amazon.

According to Buck, however, these scare tactics may come up short, with AICO soon to become law. “I do think that this bill has the best chance of passing before the August recess, before everybody really gets focused on elections,” says Buck. Of course, whip counts and votes are what get bills into law, not predictions of victory—and as Washington insiders are acutely aware, nothing is done on Capitol Hill until it is done. 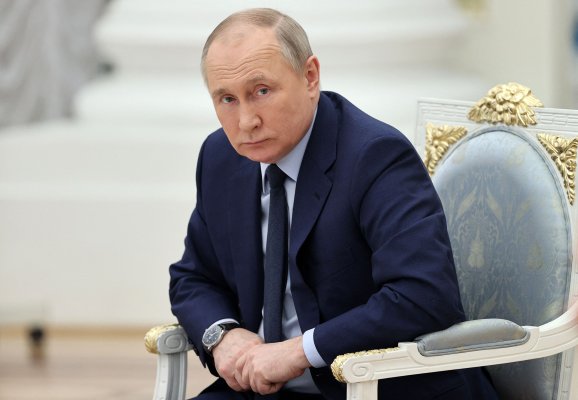 Why the New Ukraine Aid Package Is About More Than Saving Mariupol
Next Up: Editor's Pick