'How Could I Not Show This to the World?' 5 Ukrainian Photographers on Turning Their Cameras to the War

Children playing chess in the backdrop of a bombed home in Kyiv. Bodies sprawled across a highway just miles away from the capital. A funeral for soldiers at a church in Lviv. These are some of the haunting images that have stuck with Ukrainian photojournalists.

They have been documenting the death and destruction caused by Russia’s invasion for weeks, all while dealing with the trauma of a war that has deeply affected them and their families. Many feel a greater sense of duty in their work. “I don’t stay here and do this because I am a masochist,” photojournalist Maxim Dondyuk told TIME in March. “I do it because sometimes a photo can change people, change societies.”

Read More: A Visit to the Crime Scene Russian Troops Left Behind at a Summer Camp in Bucha

TIME spoke with five photographers about images that have stayed with them, why they chose to continue documenting the war under such dangerous circumstances and how they are taking care of their mental health.

Fellow soldiers carry in the coffin of Taras Diduh, who was killed on Feb. 26 in the war, during a funeral ceremony held at the Church of the Most Holy Apostles Peter and Paul in Lviv on March 11, 2022.
Oksana Parafeniuk

Oksana Parafeniuk can’t forget the early morning hours of Feb. 24. She was lying in bed and first heard explosions in Kyiv. “It felt like suddenly our lives would never be the same.”

Parafeniuk, 32, was born in the city of Boryspil near Kyiv, and had lived in the capital for more than a decade. She is currently in Poland, since she and her husband are expecting a baby in early June and needed to look for a safer place to live. They hope to return to Kyiv eventually.

Parafeniuk points out that local photojournalists face unique challenges in covering the war, especially as they and their families are dealing with danger and displacement. “I couldn’t work for many days because I was stressed about the safety of my family—trying to talk them into leaving and arranging the evacuation,” Parafeniuk says. “Every Ukrainian I know seems to be going through so much heartbreak and difficulty—so many lost hopes and dreams—and it’s just draining your energy every minute.”

She describes photographing the funeral of three Ukrainian soldiers at a church in Lviv—and the silence when their caskets were brought inside. That was followed by weeping from the soldiers’ family members. “The sound of it just pierced my soul so deep. It was unbelievably heartbreaking.”

Kateryna, 16, plays with Dominika, 3, at a temporary shelter organized at the Lviv Regional Academic Puppet Theater in Lviv on March 11.
Oksana Parafeniuk

It’s also harder to process grief when documenting the experiences of other people, Parafeniuk says. She recalls a story she reported for Der Spiegel focused on a help center where psychologists would accept free phone calls from those in distress. Sitting in on those calls, she heard Ukrainians express their anxieties around the air raid sirens. “It was very difficult emotionally, because I knew exactly the feelings that all these people who called were talking about,” Parafeniuk says.

Parafeniuk thinks she could be doing a better job at taking care of herself. She is considering therapy. She’s changed the settings on her phone so she doesn’t get notifications at night; otherwise she would constantly receive news alerts and not sleep well, she says.

Ukrainian emergency employees and volunteers carry an injured pregnant woman from a maternity hospital damaged by shelling in Mariupol on March 9. The baby was born dead. Half an hour later, the mother died too.
Evgeniy Maloletka—AP

Evgeniy Maloletka began documenting evidence of Russian crimes against Ukraine eight years ago when Putin’s troops annexed Crimea. The 35-year-old, who is from the southeastern city of Berdyansk, was among the few journalists who were reporting in Mariupol as the war escalated. Officials say the Russian invasion has led to more than 5,000 civilian deaths in the besieged city. Maloletka says he is haunted by how such a flourishing city has been razed to the ground. Most of all, he is saddened by how residents have been forced to live a life focused solely on survival.

Working has become dangerous and Maloletka has faced attacks on the job. “They are shooting at us with…all types of weapons,” he says.

The tail of a missile sticks out in a residential area in Yahidne, near Dnipro on April 12.
Evgeniy Maloletka—AP

The most powerful images Maloletka says he has taken are those documenting how Russian forces killed Ukrainian adults and children. “It’s beyond words. How could I not show this to the world?”

Being Ukrainian at this time is complicated. “All of us Ukrainians are experiencing feelings of anxiety and pride for our country,” he says.

Sasha and Anton, both 15, play chess near a ruined building in Kyiv on March 24.
Serhii Korovainyi

Serhii Korvoainyi, 27, said he didn’t even think for a second about leaving Ukraine. “For me—a Ukrainian citizen and photographer, it felt natural to stay,” he says. “I want to make sure the world sees and remembers the situation in my country.”

Before the Russian invasion, Korovainyi—who is from Khartsyzsk, in the eastern Donetsk region—had been working primarily on a documentary about Mariupol’s environmental challenges.

Some of the recent images Korovainyi captured that have stuck with him are scenes of Ukrainians spending nights in bomb and subway shelters, and an image of children playing chess outside ruins in Kyiv.

Roman, 33, soldier of the 103 Brigade of the Armed Forces of Ukraine, marries Iryna, 37, in the Garrison Temple in Lviv, on March 1. They also baptized their child, Solomiya.
Serhii Korovainyi

Korovainyi says he knows people who have been killed and displaced. He has been trying to meditate and take breaks to take care of his own mental health but “nothing really helps,” he adds.

“My country is under fire, my parents and the parents of my wife are on Russian-controlled territory,” he says. “I can’t stop thinking about it.”

An elderly woman hides under a blanket after she being evacuated from Irpin on March 8.
Julia Kochetova

Julia Kochetova, 28, is a documentary filmmaker who contributes to VICE News and Der Spiegel. She has also been working on an independent portrait series about Ukrainians who stayed in Kyiv and worked in various ways to keep their city safe and running—whether as combat medics, train conductors or animal rescue volunteers.

Flowers near a damaged floral shop inside Irpin on March 13.
Julia Kochetova

Kochetova was born in the city of Vinnytsia in west-central Ukraine and was raised in Kyiv. She says choosing to stay in the capital was an easy decision. “My camera always was a friend and therapy,” she says. But taking photos of war has been difficult. “To film your personal war, it hurts,” she says. “When your people are suffering, your friends are dying and your colleagues are missing, it crushes you from the inside out.”

Kochetova says she has turned to boxing, yoga and meditation to cope with the trauma.

A body is seen on a highway 20 kilometers from Kyiv, as Russia's invasion of Ukraine continues, on April 2.
Mikhail Palinchak—Reuters

Mykhaylo Palinchak, 37, is currently in Kyiv and has no plans to leave, although his wife and two sons have moved to Poland. Palinchak was born in the city of Uzhhorod in Western Ukraine and spent many years living in Kyiv.

Palinchak feels that documenting history through his photographs is particularly important given Russia’s weaponization of disinformation. “I feel an obligation, being Ukrainian, to document the events,” he says. “I never hold any weapon in my hands but I can hold a camera…Truth is the only weapon Ukraine has.”

General view of a room in an administrative building in the Chernobyl nuclear power plant, where Ukrainian National Guard servicemen were held as hostages since the start of Russian invasion, on April 8.
Mikhail Palinchak—EPA-EFE/Shutterstock

The most challenging assignment for Palinchak has been photographing highway M06, about 20 kilometers from Kyiv. “I didn’t expect so many bodies that have been lying on the road for weeks. I had never seen so much death, pain and tragedy in my life before.” 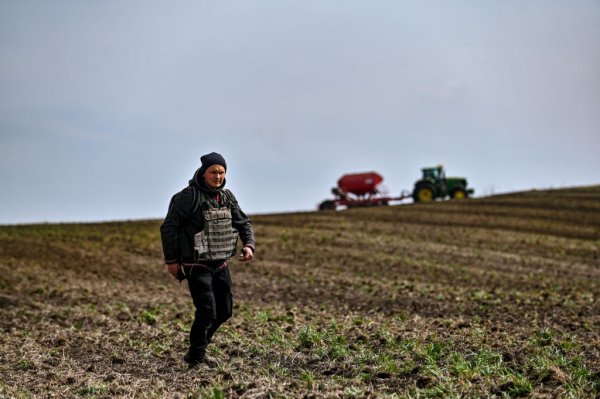 The Global Food Crisis Will Be One of Affordability Rather than Supply
Next Up: Editor's Pick