When Joe Biden had a moment to say he was right about Russian President Vladimir Putin, he didn’t pass it up. As Biden’s helicopter landed in Washington on April 4, he walked across the lawn to a clutch of press cameras and, unprompted, reminded reporters he had called Putin a war criminal two weeks earlier. Images broadcast from Ukraine in the wake of the Russian military retreat outside Kyiv were showing bodies in mass graves and dead townsfolk cuffed and shot in the head. “You may remember I got criticized for calling Putin a war criminal,” Biden said. “Well, the truth of the matter—you saw what happened in Bucha—this warrants him, he is a war criminal.”

Now that more public evidence is catching up with Biden’s rhetoric, he’s under increasing pressure to show what he’s going to do about it. Two days later, speaking to a gathering of construction labor unions, Biden decried the “inhumanity” of Russia’s attacks on civilians that were “left for all the world to see unapologetically.” These actions are “major war crimes,” Biden said, and “responsible nations have to come together to hold these perpetrators accountable.”

Biden has been personally moved by the images of summary executions, hospital bombings, and civilian casualties coming out of Ukraine, and felt it was important “to put down a marker for history,” White House Press Secretary Jen Psaki said April 5. “That’s why he has been so outspoken about this and made clear that accountability is critically important when you see the horror that we’re seeing on the ground.”

Bodies lie on a street in Bucha, Ukraine, on April 2, 2022.
Ronaldo Schemidt—AFP/Getty Images

Collecting evidence of Russian brutality for later investigations and potential prosecutions has become a priority for the Biden Administration, alongside using economic levers and aid to Ukraine to help facilitate the end of the bloody war. To do that, the Biden Administration and allies in Europe have launched a multi-pronged approach.

One step is to continue to arm Ukrainians to defend themselves to try to bring an end to Russia’s invasion. “The most important response to the war crimes is to make sure Russia loses, first of all, to accelerate the liberation of captured Ukrainian territory,” says Rep. Tom Malinowski, a New Jersey Democrat on the House Foreign Affairs Committee and a former senior State Department official overseeing human rights policy during the Obama Administration.

Without putting U.S. troops on the ground or American fighter jets in the air—which Biden has ruled out—the Administration is focusing on speeding up delivery of weapons to Ukrainian forces. Biden has ordered an increase in weapons deliveries to Ukraine, including an additional $100 million in shoulder-fired Javelin missiles that can penetrate Russian armored vehicles and tanks. Allies are also stepping up shipments of armored vehicles, tanks, and ammunition to the Ukrainian military as Russian forces reposition their firepower to focus on cities in Ukraine’s east and southern Black Sea coastline.

Read More: Inside the Historic Mission to Provide Aid and Arms to Ukraine

The U.S. is also continuing to pull economic levers. The Biden Administration decided Wednesday to further punish Russia financially in the wake of war crimes allegations, expanding sanctions and moving to block Russia’s largest financial institution, Sberbank, and its largest private bank, Alfa Bank, from the U.S. financial system. The U.S. also sanctioned two adult daughters of Putin, as well as the wife and daughter of Russia’s Minister of Foreign Affairs Sergei Lavrov. U.S. Treasury officials estimate that within one year, the sanctions will set Russia’s economy back 15 years. The sanctions join actions already taken against 140 Russian business leaders closely connected to the Kremlin and more than 400 Russian officials.

A police officer takes details after a woman's body was found in a car shot in Bucha, Ukraine, on April 6, 2022.
Chris McGrath—Getty Images

In the meantime, while hoping its other support helps Ukraine end the war, the Biden Administration is also working with others to document the ruthless violence as it happens. A U.S. intelligence team has already been staffed to document and analyze war crimes. American officials are concerned that Russian commanders in charge of units that brutalized towns in the suburbs of Kyiv may still be in the war theater and capable of committing more atrocities.

American intelligence services quickly declassified details of Russia’s war plans over the past several weeks, and that same strategy could be used to release what information the U.S. knows about the Russian soldiers and Russian military units involved in killing civilians, says Malinowski. “Even this regime is not impervious to global shame,” Malinowski says. “So publicizing the crimes and where possible identifying the units involved and who the commanders of those units are might be a helpful thing that the United States might be able to do.”

U.S. officials are reviewing just how much information is in intelligence databases, what can be shared publicly, and what might eventually be useful to investigators, according to a U.S. official familiar with the process. Sharing such information has been a source of tension within the intelligence community in the past over concerns that it could expose sources and that it could set a precedent of cooperation by the U.S. for future investigations of alleged war crimes, even if U.S. forces were the ones under scrutiny.

There are a number of agencies and organizations that have mobilized to document the killings. The Biden Administration is helping fund local aid groups to collect evidence of atrocities by Russian forces inside Ukraine, and plans to cooperate with the U.N. commission of inquiry established by the Office of the United Nations High Commissioner for Human Rights. The U.S. is also working with a designated war crimes unit in Ukraine’s federal prosecutor’s office to collect evidence for possible prosecutions.

Police and forensic personnel catalogue the bodies of civilians killed in and around Bucha before they are transported to the morgue on April 6, 2022.
Chris McGrath—Getty Images

Ukraine has asked the International Criminal Court (ICC) to launch an inquiry. A full investigation was officially opened by the ICC on March 3, seven days after Russia began bombardments against Kyiv and rolling tanks across the border in a failed attempt to take the capital. An international body like the ICC would be able to issue international arrest warrants for those suspected of war crimes. The U.S. has had a tense relationship with the ICC in the past over inquiries into potential war crimes in Afghanistan and Palestine, and isn’t a signatory to the court, so has no obligation to cooperate with the ICC’s investigation. (The Trump Administration issued sanctions against two ICC prosecutors in 2020, an action the Biden Administration reversed last year in an effort to establish better working terms with the court.)

Investigations into Russian atrocities in Ukraine ultimately could provide a detailed record of the brutal way Russia has tried to subjugate Ukraine, and expose the Russian leaders who were involved to public shame and potential arrest. But it is unclear if further isolating Russia and imposing more financial punishment on Moscow can prevent more such killings in the future.

There may be more horrors to come. Smartphones and reporters willing to risk their lives to capture the war have documented the conflict in real-time. Yet even with all of those images from the front lines, there are things the public still isn’t seeing right away, Secretary of State Antony Blinken told NBC News on Wednesday. “It’s only when that tide recedes that you see what’s actually happened. So, I think we’re gonna learn a lot more in the days and weeks ahead,” Blinken said. “I’m afraid that what we’re going to learn is even more horrifying.” 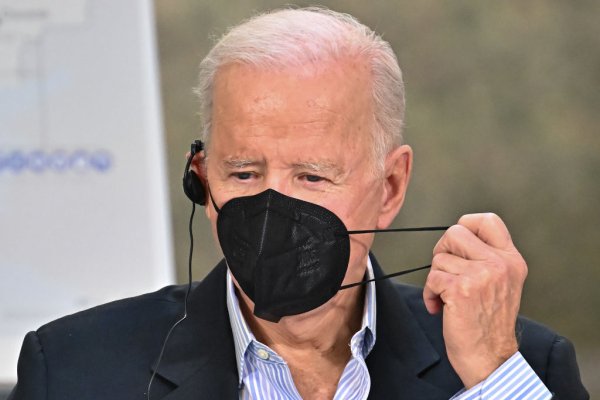 The White House Is Already Starting the Blame Game for the Next COVID-19 Spike
Next Up: Editor's Pick