Julian Fellowes conquered American television with Downton Abbey, transforming PBS’s sleepy Masterpiece time slot into appointment TV. So maybe it was inevitable that the Oscar-winning screenwriter and Conservative peer of the House of Lords would cross the Atlantic to meet his constituents. HBO’s The Gilded Age, premiering Jan. 24, is the product of that sojourn.

As its title suggests, this lavishly made, eminently watchable but mostly uninspired period drama takes on Manhattan high society in the late 19th century. Times are changing, just like in Downton (whose bittersweet eulogy for the landed gentry has long been undermined by its extension into an unkillable franchise). And with the self-made robber barons of the Machine Age invading their neighborhoods, multimillion-dollar fortunes and gaudy aesthetic preferences in tow, New York’s so-called old people, whose families have wielded power there since it was New Amsterdam, sense a threat to their social hegemony.

Addresses are of paramount importance to both crowds, and The Gilded Age inhabits the upscale intersection of Fifth Avenue and 61st Street. Widowed socialite Agnes van Rhijn (Christine Baranski, serving Violet Crawley sass) has lived there for decades, reigning over her meek spinster sister Ada (Cynthia Nixon) and playboy son Oscar (Blake Ritson). “We only receive the old people,” Agnes declares. But she can’t stop a Beaux-Arts palace from going up across the street, to house railroad magnate George Russell (Morgan Spector), his ambitious wife Bertha (a ferocious Carrie Coon), Harvard-grad son Larry (Harry Richardson) and daughter Gladys (Taissa Farmiga), for whom the couple longs to make an advantageous match.

Into this silent standoff stumbles the obligatory ingenue, Agnes and Ada’s niece Marian (Louisa Jacobson), penniless in Pennsylvania following her father’s death. She arrives at the sisters’ home with a new acquaintance: Peggy Scott (Denée Benton), a Black woman with literary aspirations, whom Agnes (a snob but not, by 19th century standards, a bigot) hires as a secretary. As willful, progressive young women in a home governed by old customs, Marian and Peggy present another set of challenges to the status quo.

If Downton is the greatest story Evelyn Waugh never told, then The Gilded Age kicks off Fellowes’ Edith Wharton era. It applies his addictive formula to a landscape that extends beyond the walls of one house, infusing big-budget costume drama with soapy plotting. At its best, it sheds light on how the social lives of Manhattan’s most prominent families influence their patriarchs’ world-historical careers.

But for the most part, it entertains without illuminating. Fellowes recycles too many of his favorite archetypes, from the closeted gay couple to the scheming servant. And while he includes two households’ worth of “below stairs” characters, their story lines go largely undeveloped in the five episodes sent for review. It’s as if their presence alone is meant to satisfy some sort of writerly noblesse oblige.

Downton Abbey, with its water cooler twists, brought the TV period drama into the 21st century. Its success paved the way for funnier, sexier, more irreverent historical shows, from Bridgerton to Dickinson to The Great. (Alas,The Gilded Age fails to generate enough heat to rival Lady Mary’s lethal affair with a Turkish diplomat.) Now it seems that, like so many of his characters, Fellowes is struggling to keep pace with progress. 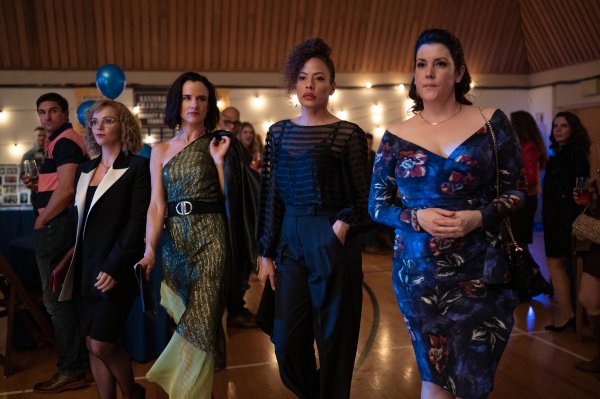 What the Yellowjackets Season 1 Finale Reveals About the Show’s Wild Teen Matriarchy
Next Up: Editor's Pick