Cheugy, Murraya and Critical Race Theory: The Words That Defined 2021

Looking back at 2021, the year was characterized by the challenges and joys of the world opening up again after a year of uncertainty and social distancing. (And then, in recent weeks, locking back down again with the emergence of the Omicron variant.) One of the most cogent ways to see the reach of this over the past year was through language—the colorful ways that we communicated the many changes, and described our adjustments, to our new way of life.

Take for example, the emergence of “hot vax summer,” a cheeky phrase coined by recently vaccinated singles ready for the thrills of a potential surge in social action after a long and lonely year of social distancing. Or breakthrough, a descriptor that’s taken on new meaning when used to talk about the emergence of new variants of COVID-19, which can infect people even when they’re vaccinated against the disease.

Of course, it wasn’t just the pandemic that shaped how we communicated this year—it would be difficult to overlook the outstanding influence of the virtual world on 2021. Between an upswing in interest in cryptocurrency and the growing interest in NFTs (more on what exactly those are, below), the lines between the natural world and the digital world—or should we say, the Metaverse—seem to be converging more and more.

Here, TIME rounds up some of the words that—for better or worse (and sometimes both)—have defined 2021:

Bestie, noun: an abbreviation for “best friend;” a term of endearment popularized by TikTok, as in “So true, bestie!”

Breakthrough, adjective: Used to describe an infection, as with COVID-19, that occurs despite vaccination against the disease.

Cheugy, adjective: A catchall descriptor for someone or something that is basic, trying too hard or not trendy; originating on TikTok, it’s often used by Gen Z to deride millennial trends.

Critical race theory, noun: (1) An intellectual movement contextualizing the effects of structural racism; (2) a buzzword in the debate over how students should be learning about race.

Read more: ‘Critical Race Theory Is Simply the Latest Bogeyman.’ Inside the Fight Over What Kids Learn About America’s History

Deplatform, verb: To ban, boycott or otherwise limit the influence of someone on a platform—usually a social media or other public forum.

Eco-anxiety, noun: Significant unease or fear about climate change and the current and future environmental harm it poses to the earth.

Himbo, noun: An attractive, but not intellectually bright man.

Hot vax summer, noun: A season of surging social action for vaccinated singles, predicted (if not realized) after a year of distancing.

Hybrid, adjective: To be composed of mixed parts, as in an employment model in which employees are expected to mix in-person and remote work.

Metaverse, noun: (1) A digital realm or collective of virtual experiences, environments and assets; (2) A vision of the future of the Internet, as promulgated by Facebook’s October announcement that it was renaming itself Meta.

Read more: Why TIME Is Launching a New Newsletter on the Metaverse

Murraya, noun: (1) A genus of tropical Asiatic and Australian trees and shrubs, and (2) the word with which Zaila Avant-garde in July became the first Black American winner of the Scripps National Spelling Bee, which dates to 1925.

Regencycore, noun and/or adjective: A fashion and culture trend inspired by the look of the British Regency period—or by Netflix’s hit Bridgerton and the series’ celebration of early 19th century aristocrats and their glamorous foibles. 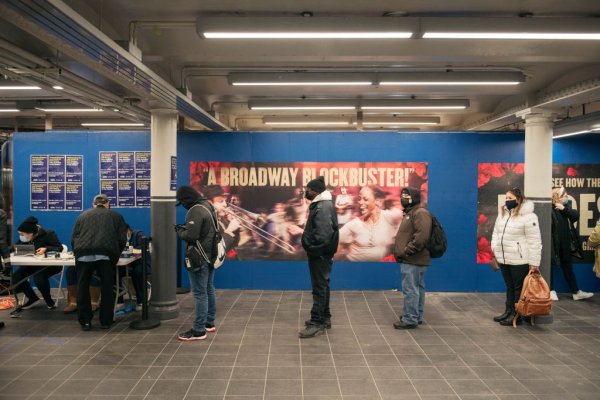 Omicron Now Accounts for 59% of U.S. COVID-19 Cases, According to Public Health Officials
Next Up: Editor's Pick