The best albums released this year explored heartbreak, obsession, salvation, family, rage and isolation; sometimes they explored exploration itself. As live music started to cautiously return to stages, some artists reflected their year of withdrawal through minimalism, like Miranda Lambert. Others, like Kanye West, refilled stadiums and created work at the most epic scope possible. Here are the records we had on repeat all year long. (Also check out TIME’s lists of the 10 best podcasts and TV shows, as well as the 100 must-read books of the year.)

Jazmine Sullivan fully commits to her pleasure—and ours—with Heaux Tales, her fourth studio album, a paean to the triumphs and tribulations of sex and love. Interspersed with spoken-word interludes by a chorus of different women, the album is an ode to female desire, driven by Sullivan’s sultry, powerhouse vocals.

The Brooklyn rapper and skateboarder Sage Elsesser, who goes by Navy Blue, raps with a cool patience, his lyrics spilling out not so much in couplets as amorphous word clouds. Over dusty soul samples, deft piano voicings and whining saxophones, Elsesser raps of family, strife and salvation, employing a flurry of homonyms and internal rhymes that will keep you finding new sleights of tongue upon every listen: “Just a spoke on a wheel / I appeal to what I wrote ‘cause it spoke to the feels / Just a lonesome scarecrow in the fields / Waiting, romanticisation of the gates / When I was down and out in “Ruby’s Arms,” Tom Waits / Time waits, I made it through with God’s grace.”

8. The Hands of Time, Weedie Braimah

It would be easy to let the polarizing controversies of Kanye West overshadow the exhilarating thrills of his 10th studio album, but to do so would be to miss out on a glorious, if slightly messy, opus. The album, which rolled out after a series of highly publicized listening parties, finds Ye pondering his faith and mother (for whom the album is named), his impending divorce and his family over a sprawling and ambitious 27 tracks. Though haters derided its length and contentious release, its joy lies within its huge roster of guest talent, from the Weeknd to Jay Electronica, and West’s impressive ability to commandeer this wealth into a sonic experience both spiritual and sublime.

While most country music coming out of Nashville these days wears a glossy sheen, this record from Lambert, Ingram and Randall was recorded in the desert of Marfa, Texas, where you can hear beer cans crack open and planes fly overhead. But what the album lacks in production value it more than makes up for in breathtaking triple harmonies, tender fingerpicked guitar work and an ineffable sense of communal joy. Together, the trio finds ecstasy in small things—like homegrown tomatoes—and deliverance after brutal heartbreak.

5. Still Over It, Summer Walker

Like any true diva of the R&B genre, Walker’s music is fueled by romantic melodrama. Her excellent second studio album is no exception. Inspired by the rumored infidelity of a former partner, London on da Track, not only the father of her daughter but a producer on several of the album’s songs, Walker uses Still Over It as both dialogue and catharsis. The result is a soulful, intoxicating breakup album destined to become a contemporary R&B classic. With smooth-as-hell vocals and deliciously wry misandry, heartbreak never sounded so good.

Elegant, petulant, abrasive, foreboding: the third album from the English rock band covers a lot of emotional and musical ground, and it does so fluidly and flawlessly. Lead singer Ellie Rowsell sounds tremendous throughout, whether she’s sweetly harmonizing with herself in tributes to California (on the standout “Delicious Things”) or screaming with the feral energy of Courtney Love.

3. to hell with it, PinkPantheress

If you’re searching for the sound of the future, look no further than PinkPantheress’s exhilarating debut mixtape for the digital age. The 20-year-old artist pulls from old-school house and garage samples, fortified with doses of breakbeat, to construct her dreamy, emotive dance tracks, bolstered by her silky, angelic vocals. The 10 songs clock in at just under 19 minutes, but this brevity highlights her dextrous ability to deliver a vibe in two minutes or less.

On his eponymous fourth studio album, Long Beach, Calif., rapper Staples fully leans into the elements that have garnered him a cult following in the indie rap scene: downtempo beats; moody melodies; and dark, deadpan wit about the grim realities of the street. Produced entirely by his friend and hip-hop producer of the moment Kenny Beats, this tightly curated 10-track LP offers the most intimate look yet at who the inscrutable Staples is—as both a man and an artist.

Listening to Promises is like driving through an ever changing coastal landscape, as sheer cliffs, flowing rivers and rolling fields of purples and reds emerge out of the haze. Organized around one recurring ethereal riff, the unlikely collaborative duo of Sanders (an 81-year-old Arkansan free-jazz saxophonist) and Floating Points (a 35-year-old British electronic producer) build a topography of reverie and chaos, with some help from the magisterial London Symphony Orchestra. It’s a stunning nexus of jazz, classical and ambient influences that transcends genre to create something wholly new. 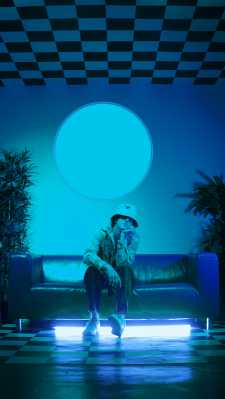 Can NFTs Challenge the Music Industry?
Next Up: Editor's Pick