Ideas
By S. Mitra Kalita
Kalita is co-founder and CEO of URL Media, a network of Black and Brown news and information outlets that share content, revenue, and distribution. She also is publisher of Epicenter-NYC, a community journalism initiative in Queens, and columnist for TIME and Charter. A veteran journalist, Kalita most recently worked at CNN, and is the author of two books. Follow her on Twitter @mitrakalita.

What a time to be managing a team.

On a macro level, being a manager is a more complicated role than it used to be: Employees increasingly approach their bosses with more personal and professional issues than before the pandemic, according to 59% of managers in a recent Prudential survey. They also say they want more guidance and training from their companies on how to handle ever-changing needs and demands.

And on a more zoomed-in level, we’re now at the point in the calendar where end-of-year burnout takes hold, set against all the deadlines and quarterly and annual goals. There’s also holiday stress, holiday-in-a-pandemic stress, and is-it-a-cold-or-is-it-Covid stress to create a perfect energy-draining storm. It’s a lot to slog through, let alone lead through.

What it takes to be a great leader right now was the driving question of last week’s Charter Workplace Summit. The short answer: a lot—but it’s hardly impossible.

One of my favorite moments of the conference came toward the end of a panel I moderated with Asana chief operating officer Anne Raimondi and PayPal chief human resources officer Kausik Rajgopal, where we discussed concrete strategies for leading effectively through these times. In that spirit, I compiled a list of ways, big and small—including some from our conversation—to keep our teams (and ourselves) engaged in these last few weeks of the year. These are not strategies that require a whole lot of legwork; instead, they’re tactics that managers can implement right away.

In our discussion at the Summit, Rajgopal shared this inclusivity hack he borrowed from the US Supreme Court (it’s at the 26:35 mark in the video of the panel). He suggested making sure everyone speaks at least once during meetings before others get a second chance. As we shift to hybrid work, accounting for participation becomes harder than going through squares on a videoconference. Colleagues are forced to take stock of who else is among them, allowing all to have input, before taking up more space.

It can be hard to get to what’s actually top of mind and important to employees during check-ins, Raimondi said in the same discussion (around 27:42 in the video). Instead of asking for updates that can be shared in a few words, she suggested asking more open-ended questions, such as “If you had a magic wand, what’s the one thing you would change?” or “What’s one thing that’s going really well and you want to make sure I don’t change? What’s bringing you joy?”

I try not to schedule anything until after 1pm on Mondays so I can set my intentions for the week ahead, rather than begin it in reactive mode. Anshu Prasad, founder and CEO of shipping platform Leaf Logistics, says his company has no internal meetings after 2pm on Fridays and is trying to give Fridays off through the remainder of the year. Both scheduling strategies allow workers to ease in and out of the week in a gentler way.

In August, Redfin embarked on a “reduced-stress week.” This meant no meetings, not even check-ins, and managers were asked to avoid assigning new tasks during this time. CEO Glenn Kelman says it was such a hit that the real-estate company now plans these once a quarter.

Start Monday meetings by asking everyone what they did over the weekend, suggests Cornell Tech professor Mukti Khaire. And “end Thursday or Friday meetings asking about plans,” she says, with the goal of “trying to reinforce that life exists beyond school.”

Ask employees to plot themselves on an S curve.

Get specific about how to best invest in your employees’ professional growth. “Coming out of the pandemic, people want to grow, but aren’t sure how,” says Whitney Johnson, founder and CEO of Disruption Advisors and author of the upcoming book Smart Growth: How to Grow Your People to Grow Your Company. She suggests asking them to plot themselves on an S curve. Are they:

It’s worth repeating: The key to this exercise is that you’re asking people for their self-assessments, rather than attempting to plot them yourself. “Where you think they are is less relevant than where they think they are,” Johnson says.

Many of the people I spoke to shared ideas about getting to know people better and creating more “bump-ins” during remote work, the benefits of which are backed by research. Prasad’s startup, for example, uses the Donut add-on in Slack to schedule casual chats between employees, saying it helps “to pair up folks who wouldn’t talk to each other” normally and ask them not to talk about work.

Dr. Abhay Dandekar, vice president of medical strategy at VuMedi, suggests a game of what he calls circular “shadow” tag. Person 1 shadows Person 2 during part of their workday and observes who they are and what they do. Person 1 then summarizes to the entire team what Person 2 does and why they are so valuable as a team member. Person 2 then follows someone else, and on and on.

If you have less time, Michael Saterman, managing partner of Saterman Connect, suggests a modified version: “Every week, pair up individuals with someone from another department. They are to schedule a ‘walk and talk’ where they are not on a video call or discussing work,” he says—if not in person, then over the phone. “It expands their network, builds connections on a human level, and gets them away from the computer for a bit of exercise.”

Check in early and often.

I followed the advice of a recent column I wrote about onboarding—check in with new employees every day for the first two weeks—and am pleased to report it works. If you have several people starting at once, other workplace experts advise holding office hours regularly to make yourself accessible as a leader without pushing yourself into burnout. It works beyond onboarding, too: Consider making office hours a regular part of your schedule, to address any employee concerns or questions as they arise without having to schedule separate meetings.

Give secret shoutouts this holiday season.

Instead of organizing an office white elephant or Secret Santa, try giving people what they really need right now: positive feedback. The end of year “is the perfect time to energize your team by celebrating the year’s wins,” says Lola Bakare, an entrepreneur and marketing adviser. “Public recognition from peers never fails to energize.” She suggests a virtual “secret shoutouts” session where everyone is randomly assigned a teammate to recognize for their accomplishments.

It’s no coincidence that a lot of ideas to avoid burnout and keep teams energized focus on meeting culture, which has been totally redefined in the pandemic. The goal, says Rob Cross, professor of leadership at Babson College and author of Beyond Collaboration Overload: How to Work Smarter, Get Ahead and Restore Your Well-Being, is to keep redefining it. Some of his suggestions:

In this second exercise, “The best [ones] are structured along a line that gets people to be a little more authentic each time,” Cross says. “Universally, people say that the thorn part of this creates authenticity and a willingness to take risks with admitting failure or asking for help…. It is building benevolence based on trust, which is critical for groups to operate well.”

Of course, no team-building exercise will work without intention and a little bit of planning. What these suggestions make clear is that the best way to spend these last few weeks of the year is reestablishing connection among your teammates—and between your team and yourself. 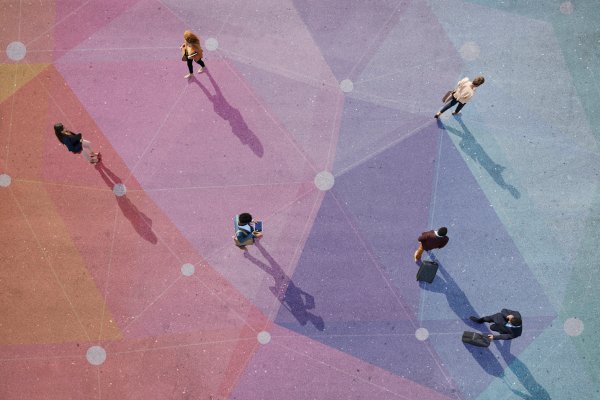 The Work of Critical Race Theory Falls on Employers Now
Next Up: Editor's Pick

How We Can Learn to Live with COVID-19 After Vaccinations
EDIT POST
Subscribe Now
Already a print subscriber? Go here to link your subscription.
Need help? Visit our Help Center.
Purchased TIMEPieces? Go here to connect your wallet.
Subscribe Now