‘Why Can’t I Hold His Hand?’ The Supreme Court Will Decide What Comforts a Pastor Can Offer During an Execution

Dana Moore likes to get on the road by 3:30 am. It takes roughly five hours to drive from Corpus Christi to Livingston, Texas, and he tries to beat the morning traffic. He watches dawn slowly break, and stops at the same Buc-ee’s convenience store halfway on his journey to grab coffee and gas. By 8:30 he hopes to have reached the Allan B. Polunsky Unit, a prison in Livingston, where he starts his day: ministering to men on Texas’ death row.

“I’ve been asked, ‘Why this ministry?’” he says. “In the Bible, Jesus equates visiting those in prison with visiting him… I felt the ministry placed in front of me was a call from God. And so I say, ‘yes I will do that.’ Who can say no to God?”

The 58-year-old Southern Baptist pastor became the spiritual advisor to John Ramirez, a 37-year-old death row prisoner, in 2017. Moore visits Ramirez around once a month; they sit and talk through a wall of plexiglass for two hours.

Ramirez was sentenced to death in 2008 for the 2004 murder of 46-year-old Corpus Christi convenience store clerk Pablo Castro. For years, Moore and Ramirez rarely talked about his looming execution.

Read more: The Death of the Death Penalty

But over the summer, their conversation turned towards death. Ramirez was scheduled to be executed Sept. 8. While prison officials said Moore would be allowed to stand in the execution chamber, he would not be able to touch Ramirez as he dies. On Aug. 10, his lawyer filed a federal lawsuit asking that Moore be allowed to do so. The state declined the request nine days later, adding that Moore would also not be allowed to audibly pray while in the room.

“That didn’t make sense to us,” Moore tells TIME. “The job of a minister is not to stand still and be quiet. Prayer is very important. And the power of touch is real. It’s encouraging. It brings peace. It’s significant… Why can’t I hold his hand?”

On Aug. 22, Ramirez’s lawyer filed an amended emergency petition asking that his execution be halted until Moore is allowed to touch and audibly pray over him. The request set off a legal battle that has rocketed up to the Supreme Court, which will hear oral arguments on the case Nov. 9. While the district and circuit court denied his request, the high court announced on Sept. 8 that it would stay his execution—scheduled for that very night—until it could more fully consider it.

Most Popular from TIME

Ramirez’s attorney argues that the “vocalization of prayer” and the “laying on of hands” are significant aspects of the Baptist faith tradition and that, by rejecting Ramirez’s request, TDCJ violated both the First Amendment’s free exercise clause and the Religious Land Use and Institutionalized Persons Act (RLUIPA), which prohibits the government from imposing a “substantial burden” on religious exercise.

TDCJ responds that Ramirez’s request violates security protocol and was raised too late, and has suggested it was a tactic to delay his execution. (When asked for comment, the Texas Department of Criminal Justice responded that it “does not comment on pending litigation.”)

The case, Ramirez v. Collier, is the first time the Supreme Court will hear the question of what role clergy can play in executions on its merits docket—meaning it is the first time the high court will issue a full opinion on the issue. Legal experts say that the ruling could provide more clarity for death penalty states on how to handle such requests going forward, and end a years-long string of litigation out of Texas and Alabama over what religious rights prisoners are granted as they are being put to death.

“On one level there’s a tremendous amount of support for expansive protections for religious practices, and then you meet, head on, the state’s need for security in its prisons,” says Ramirez’s lawyer Seth Kretzer. “Those two things are in great contrast. So we are where we are in front of the Supreme Court.”

Read more: In a Year Marked By Death, the Trump Administration Cements a Legacy of Unprecedented Executions

SCOTUS has waffled on the issue over the past few years in a series of cases on its “shadow docket,” a term that refers to expedited decisions outside of the court’s formal proceedings that skip many of the traditional steps, including oral arguments. In other words, while it has issued emergency rulings—and periodic concurrences—on these questions, the court has given limited insight into its thinking.

The first of these “shadow docket” cases came in Feb. 2019, when the high court voted 5-4 to allow the execution of a Muslim man in Alabama whose request to have his imam in the execution chamber was denied, even though the policy at the time allowed Christian chaplains into the room. Then, less than two months later, the court agreed to halt the execution of a Buddhist prisoner in Texas who sued TDCJ for preventing his priest from entering the chamber—despite allowing in state-paid Christian and Muslim chaplains.

Justice Brett Kavanaugh, who had voted to allow the Alabama execution to go forward, wrote a concurrence explaining his reasoning for halting the Texas execution, citing “several significant differences” between the cases, including when the Texas prisoner raised his claim. While a state may have understandable reasons for limiting who can go in the execution chamber, Kavanaugh wrote, it can’t allow certain denominations in and not others.

Read more: What Happens to the Federal Death Penalty in a Biden Administration?

Texas changed its policy shortly afterwards, banning clergy from entering the death chamber entirely. A Catholic prisoner challenged that policy up to the high court in June 2020; the Supreme Court halted his execution the next day. And in Feb. 2021, the court halted the execution of an Alabama man on similar grounds. Alabama relented, and the man was executed with his pastor in the room on Oct. 22.

In light of the court’s most recent ruling, Texas changed its policy again in April to allow clergy to enter the death chamber. So the high court will now address a slightly different question: What can Moore do while he’s there?

Michael McConnell, the director of the Constitutional Law Center at Stanford Law School, who collaborated on a brief with the Becket Fund for Religious Liberty and Harvard Law’s Religious Freedom Clinic in support of Ramirez, says the court may have taken up the case because “they want to put an end to this.”

Ramirez in the visitation area of the Allan B. Polunsky Unit prison on Aug. 25.
Matthew Busch—The New York Times/Redux

“They don’t want to have one or two of these coming along every year,” he explains. “And so if they announce a single clear precedential opinion, that will solve the problem.”

In their brief filed before the court, McConnell, Harvard and Becket argue that the “presence of clergy at executions—and their ability to pray aloud for and touch the condemned—is an ancient religious practice that our Constitution and laws protect from arbitrary government interference.” They cite examples of the practice being allowed in colonial England, the Revolutionary War and the Antebellum-era, among others.

“It is, I think, inconceivable that America in 2021 would decide to not protect a right that was so firmly protected 300 years ago,” McConnell argues.

Prisoners today on Texas’ death row are not allowed physical contact with anyone, besides their handcuffs coming on and off, Moore points out. In all the years they’ve known each other, he’s never touched Ramirez. “Jesus himself, his touch, it healed people,” says Moore. “There’s something empowering and encouraging in [that].” It’s important to both of them, Moore says, that his touch offers Ramirez some element of peace as he dies.

“John’s life has value,” Moore says. “He’s still a human. You still deserve the dignity of being created in the image of God.” 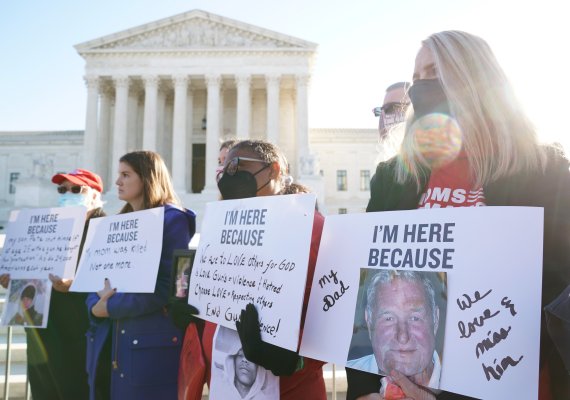