As October nears its spooky, sugar-saturated end, one thing is clear: it hasn’t been a very good month for new TV shows. Maybe you were too busy bingeing on horror movies or wolfing down HBO’s most exciting Sunday-night lineup in years (Succession, Insecure, Curb Your Enthusiasm) to notice, but it’s true. Whether it’s because platforms front-loaded their fall fare in September or because they bet big on Halloween nostalgia—Chucky! Day of the Dead! I Know What You Did Last Summer!—that failed to deliver, the pickings are slim. Below, you’ll find the best of that bunch: a drama that tabulates the human cost of poverty, a romantic comedy that breaks the mold, a bake-off you’d need an engineering degree to win and more. For more suggestions, here are my favorite shows from last month and the first half of 2021.

Baking competitions have long been Food Network’s bread and butter, but now that every streaming service in existence is putting its own spin on the recipe, it seems as if a new one pops out of the oven weekly. And with the exception of the consistently charming Great British Baking Show, the whole format is starting to get a little old. So it came as a pleasant surprise when I found myself getting sucked into Baking Impossible, which pairs bakers with engineers to construct edible artworks that double as Rube Goldberg machines, survive car crashes and pass all manner of other stress tests. The resulting portmanteau, bakineer, is terrible (I picture pirates who plunder bacon). But the so-called bakineers are talented, the challenges are fascinating and it’s both thrilling and heartwarming to watch formerly unacquainted duos from very different backgrounds, with very different skillsets, work collaboratively to accomplish an extremely nerdy goal.

It’s an old story. Just when you think you know where your life is heading, somebody comes along and shoves you off that safe, familiar trail and onto a new one. One such transition shapes the smart second season of Love Life, an HBO Max anthology series that follows the romantic travails of a new character in each season.

This edition’s protagonist, Marcus Watkins, a married book editor played by William Jackson Harper, meets his potential soulmate Mia Hines (Jessica Williams) at a wedding. (Season 1 viewers will recognize Anna Kendrick’s Darby as the bride.) Small talk leads to an “emotional affair” that hastens the end of Marcus’ marriage. Instead of navigating his new path with Mia, however, as he’d hoped to do, he’s left lost in the woods, not just single, but also fundamentally confused about who he is and what he wants out of life. The scenario yields a far fresher story than Kendrick’s generic single-girl-in-the-city tale. [Read the full review.]

As this poignant, layered and persuasive drama based on Stephanie Land’s best-selling memoir Maid: Hard Work, Low Pay, and a Mother’s Will to Survive so vividly illustrates, having friends and family doesn’t always mean having anyone you can count on. Which is why so many Americans must rely on social services when precarity swerves into crisis. A wrenching (though not unremittingly bleak) portrait of a 25-year-old mom who’s desperate to give her daughter a more stable childhood than she had, Maid also demonstrates how the families our society refuses to help can get trapped in cycles of poverty and abuse. [Read the full review.]

The Next Thing You Eat (Hulu)

Another food show? Sorry, yes. But it’s as different from Baking Impossible as an entry in this genre can be. Celebrity chef and Momofuku mogul David Chang (late of Netflix’s Ugly Delicious) teamed up with acclaimed documentarian Morgan Neville (Won’t You Be My Neighbor?) to make this six-episode glimpse at the future of food, which is refreshingly honest about some of the industry’s stickiest problems. From the sustainability crisis surrounding beloved dishes like burgers and sushi to the labor nightmares that come with delivery apps and automation, The Next Thing You Eat isn’t afraid to sound the alarm. But neither does Chang scold the viewer; he’s the first to admit that, while he’s increasingly sure that vegetarianism is the correct moral choice, he has yet to develop the willpower to give up meat. Ultimately, the show isn’t a polemic so much as it’s a wake-up call, alerting us to the reality that big changes in the way we eat are afoot whether we like it or not.

In 2021, pop culture has fixated on female music icons from the turn of the millennium—and that fascination goes way beyond the emancipation of Britney. This past spring, executive producer Tina Fey and creator Meredith Scardino offered up Girls5eva, a hilarious musical comedy that traced the reunion of a late-’90s one-hit-wonder girl group. Next came BET Presents: The Encore, a friction-packed reality series that mixed and matched singers from R&B groups of roughly the same period, in hopes of launching a new act. And now we have Queens, a soapy drama that follows the four members of rap crew Nasty Bitches as they attempt to overcome the differences that split them up 20 years earlier and ride the nostalgia wave.

The show’s greatest asset is its cast, which includes some true icons of Y2K-era pop. Brandy gives the story its emotional center as Naomi, a.k.a. Xplicit Lyrics, a wounded artist struggling to launch a solo singer-songwriter career and fix her relationship with a daughter. Rapper Eve plays Brianna (nom de rap: Professor Sex), now a married mother of five who’s ambivalent about stepping back into the spotlight. Naturi Naughton, whose stint in R&B trio 3LW led to the role of Lil’ Kim in Biggie Smalls biopic Notorious and a main-cast slot in Starz’s Power, is Jill Da Thrill—who traded drugs for church but now must choose between her adoring husband and the woman she secretly loves. Rounding out the quartet is Valeria (Nadine Velazquez of Major Crimes), a Machiavellian antagonist who parlayed her fame into a cushy gig in daytime TV. As a veteran of Scandal, creator Zahir McGhee knows his way around a twisty plot. He’s also clearly a fan of women in hip-hop and R&B; the fictional group feels especially believable because their backstories recall aspects of real-world counterparts from Salt-N-Pepa to TLC to Queen Latifah. The music is solid, too. If you watch one broadcast series this fall, it’s gotta be Queens. 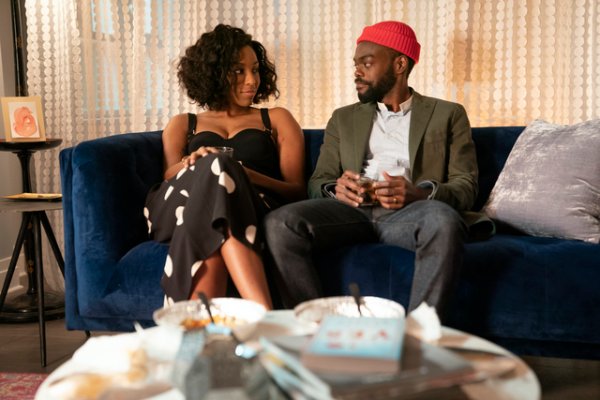