On the night of Oct. 13, a woman was raped on a commuter train near Philadelphia—an attack that authorities say lasted several minutes and could have been stopped sooner had any of the other passengers onboard called 911. Instead, in what police say is a troubling sign of the state of society, no witnesses intervened. Some reportedly pointed their phones in the direction of the unfolding assault.

“It’s unconscionable that no one helped,” says Philip Zimbardo, a psychologist and professor emeritus at Stanford University, echoing similar remarks made in the last few days by local police.

Yet, given how much the COVID-19 pandemic has deteriorated social norms, if this did happen the way authorities say it did, it’s not entirely surprising. In the last year and a half, the virus has made people more self-preserving, more isolated and more fearful of the unknown, according to Zimbardo and other experts who study the “bystander effect,” a psychological theory that people are less likely to help the more other witnesses are present. Throw in rising crime in 2020 and a pandemic-fueled surge in U.S. gun sales, and it’s not hard to see why more people than usual might be retreating into their own corners.

Read more: Why Everyone Is So Rude Right Now

“The pandemic has highlighted that a lot of people think, ‘I’ve just got to take care of myself,’” says Matt Langdon, founder of the Hero Round Table, an organization that teaches people how to be more than bystanders. “That’s just fundamentally wrong, and that’s a big concern in today’s world.”

It’s unclear how many other passengers were on the Southeastern Pennsylvania Transportation Authority (SEPTA) train at around 10 p.m. when authorities say a man sat down next to the victim and began sexually assaulting her. They say that a transit worker came upon the scene and called 911. SEPTA officers caught the 35-year-old suspect in the act and arrested him, the agency said in a statement. The man arrested was being held on $180,000 bail and faced charges that include rape and sexual assault.

Timothy Bernhardt, the superintendent of the Upper Darby Township Police Department, said there were “a lot of people” onboard who should have “done something,” according to the Philadelphia Inquirer, an account disputed by the Delaware County District Attorney Jack Stollsteimer, who told a news conference that the train was not crowded and that other riders might not have known what was happening. He urged any witnesses to come forward.

A passenger waits on a SEPTA train platform at a commuter rail station in Philadelphia on July 30, 2021.
Hannah Beier—Bloomberg/Getty Images

It’s impossible to know other passengers were seeing or thinking, but experts of the “bystander effect” say there are many new pandemic-borne factors that might lead people in such a situation to do nothing.

For one, Zimbardo says, isolation from lockdowns and self-quarantines has not only heightened people’s tendencies to avoid others, but it’s increased the likelihood that more people will be self-centered and less willing to put a stranger’s needs above their own. “Social isolation, over time, means that you focus on yourself,” he says. The overriding desire to stay safe makes sense from an evolutionary standpoint, according to Langdon, who says humans learned as a species early on that to survive, “we had to be wary of people that are not like us and stay away from scary things.” COVID-19 exacerbated that inherent suspicion of others when it created a fear that anyone, with or without symptoms, could be carrying the virus that has since killed close to 5 million people worldwide.

Even pre-pandemic, those who have studied the behavior of bystanders have long known that in emergencies, people don’t usually feel inclined to help others who aren’t part of their circle or with whom they don’t have a shared identity. A 2005 study found that an injured stranger wearing a specific sports team shirt was more likely to be helped by a fellow fan than if he or she was wearing a rival team’s shirt or an unbranded sports shirt.

“We’re looking out for people like us and friends and family, but we’re not often extending that circle of care to people outside that group,” says Jay Van Bavel, a New York University psychology professor. That might help explain why so many victims of anti-Asian attacks across the country said they received no help from bystanders as hate crimes surged during the pandemic. Just like in New York City, where security guards at a nearby building shut the doors on an Asian American woman who was attacked this March, nobody helped Joyce Sung, a Korean-American convenience store owner in North Carolina, when she was twice attacked at work.

A major reason why people may be less likely to act in the presence of other bystanders, according to psychologists, is because they believe somebody else will probably call the police or because they don’t feel as obligated if they see that no one else is doing anything. For many now, Van Bavel says, their decisions could also be rooted in fear of increasing firearm sales as well as gun violence in the U.S., which has surged to record levels. Homicides rose nearly 30% in 2020 from 2019—the highest jump year-to-year in the FBI’s recorded history, according to figures from the agency. In 2020, gun homicides and non-suicide-related shootings claimed more than 19,000 lives—the highest death toll in more than 20 years, according to data from the Gun Violence Archive, a nonprofit that tracks shooting incidents.

“There definitely is an increase of danger and callousness at a societal level,” Van Bavel says.

Read more: Children and Teenagers Are Being Shot in Record Numbers

In 2020, the FBI conducted nearly 40 million firearm background checks, which is more than any year on record, according to the agency’s data. That year, about 6.9 million people in the U.S. became first-time gun owners, according to estimates by the National Shooting Sports Foundation, a gun trade group. In 2021, the Small Arms Analytics & Forecasting says the firearms market “remains extraordinarily active,” with an estimated 14.8 million gun purchases from January to September. While a recent study found no clear link between widespread firearm purchases and increases in interpersonal gun violence, psychologists say a fear alone that an assailant could be armed is enough reason not to want to get involved.

Police say the man arrested on the train was not armed, but the passengers likely could not have known that. Because of the prevalence of guns, Langdon says, “deciding to act could be the last thing you do.”

An added factor: like other mass transit systems across the country, Philadelphia’s has seen a big drop in ridership during the pandemic, meaning there likely were far fewer people on the train than there might have been in pre-pandemic days to join the effort if someone had decided to get involved.

Still, the experts say it’s a shame if, indeed, the train’s passengers were frozen in inaction, especially because there were small actions to be taken, like calling 911. Zimbardo says people who believed they were witnessing a crime could also try banding together and vocally pressuring an assailant to stop. As soon as one person starts to help, he says, the second usually jumps in. Such was the case in December 2003 when Van Bavel was on a Toronto subway platform and saw a man drag a woman up a staircase and throw her against the wall while screaming at her. At rush hour, hundreds of people craned their necks to see what was happening, Van Bavel says, but no one did anything. He alerted authorities and also intervened, sparking an intense argument with the man. Van Bavel says as soon as he jumped in to help, another man did too. The two grabbed the man and held him until police arrived. “I’m glad I did it, and I’d do it again,” he says.

For many, that might be easier said than done. But without people willing to help, Langdon says, society crumbles.

“The opposite of a hero is not a villain,” he says. “It’s a bystander.” 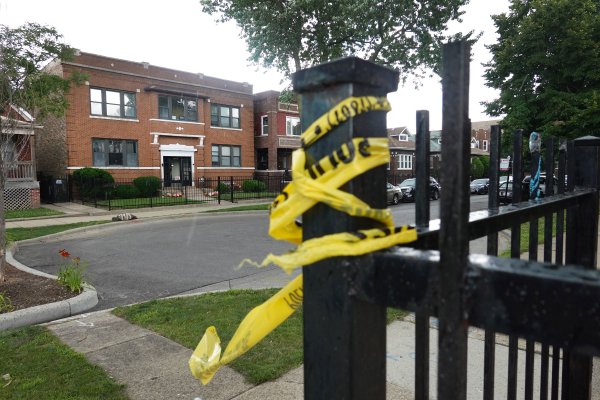 FBI Data Shows a Surge in Murders in 2020. That's Not the Full Story
Next Up: Editor's Pick