The Food and Drug Administration’s (FDA) expert vaccine panel on Friday, Oct. 15, recommended a booster dose of the Johnson&Johnson-Janssen COVID-19 vaccine. In a unanimous vote, the 19-member panel recommended the booster for anyone who was previously immunized with the vaccine, at least two months after the that first dose. With the advice, the panel has now backed boosters for all three vaccines currently available in the US.

J&J’s vaccine is the only one authorized in the U.S. (and globally) that requires only a single dose. If the FDA accepts the committee’s decision, which it is expected to do, the Centers for Disease Control will then outline which specific groups should receive the additional dose.

The recommendation comes a day after the committee recommended a booster of the Moderna vaccine, which uses a different technology than J&J and requires two doses initially. The FDA is expected to make a formal decision soon about whether to follow the committee’s advice on that vaccine. The FDA and CDC have previously authorized the Pfizer-BioNTech booster for people over age 65 and for adults who are at higher risk of severe COVID-19 and its complications, such as people with underlying health conditions, as well as health care and other essential workers whose jobs may put them at increased risk of exposure and therefore more severe COVID-19.

J&J’s request was a complex one, and the committee had to decide whether to recommend the booster two months or six months after the single dose. From the start, J&J’s was less efficacious than the ones from Pfizer-BioNTech and Moderna, but the committee supported the vaccine because it provided practical benefits in the middle of a pandemic—unlike the Pfizer-BioNTech and Moderna vaccines, J&J’s requires only a single shot, and the vaccine does not need to be shipped and stored in ultra-cold conditions, but can be kept frozen or refrigerated. Those are significant advantages for reaching a large part of the world’s population, especially in in lower-resource countries.

At the committee meeting, J&J presented data showing that after the comparatively lower immune response generated after its single dose, a second, booster dose given two months later enhanced that response. That data prompted most of the members to question whether the J&J shot should have been a two-dose vaccine to begin with. “I think this was always a two-dose vaccine,” said Dr. Paul Offit, professor of pediatrics at Children’s Hospital of Philadelphia and a member of the committee. “It’s hard to recommend the single-dose [now] given the two-month data.” He noted that had the two-month data on immune responses to the second dose been available at the time that the companies originally requested an emergency use authorization (EUA) back in February, the committee likely would have recommended the vaccine be given in two doses, rather than one. That’s why the committee ultimately voted in favor of authorizing a booster dose beginning at two months for anyone after getting a first shot of the J&J vaccine.

The data get more complicated, however. At the FDA meeting on Friday, J&J researchers presented studies showing that their vaccine provides strong and persistent protection against COVID-19 disease that lasts up to eight months following the single vaccination. According to J&J’s studies, while the efficacy of their vaccine starts out lower—at around 74%, compared to the 94% and 95% efficacy recorded for the Pfizer-BioNTech and Moderna vaccines, respectively—J&J’s efficacy remains stable for months while both Pfizer-BioNTech and Moderna have documented drops in virus-fighting antibody levels starting about six months after the second dose.

One of the committee members, Dr. Hayley Gans, professor of pediatrics at Stanford University, noted the apparent paradox inherent in J&J’s request for an authorization of a booster: if a single dose of J&J provided this sort of consistent protection, especially against severe disease, why would a booster be needed?

In response, Dr. Peter Marks, director of the Center for Biologics Evaluation and Research at FDA, noted that the data on J&J’s efficacy might not be as robust as the companies suggested, citing recent CDC studies indicating vaccine efficacy as low as 50% a few months after vaccination. “There is more data out there than what we are seeing,” Marks said. “All of the data do not fully align with this being a vaccine that retains excellent activity over time against all forms of disease, or even against severe forms of disease.”

Finding the balance between the rigorous scientific evidence that regulatory agencies like FDA require and the real-world urgency of meeting the threat of an ongoing pandemic has been the recurring theme of the review of booster shots. Committee members have consistently raised questions about what the goal of boosters should be, given that the existing regimens do seem to continue to provide adequate protection against severe disease, based on currently available data. The question for the committee was to weigh how comfortable they are with the protection provided by original dosages, and how preemptive they want to be in having boosters ready for the public to head off waning immunity before it hits the point where more vaccinated are getting infected and getting severely ill—especially in the context of variants like Delta.

In theory, one goal of the additional shots could be to raise immunity levels to the point where people are less likely to transmit the virus if they do get infected, but there aren’t strong enough data to show that vaccines actually do that. Another goal would be to throw up a higher wall of immunity against new variants of SARS-CoV-2, especially the now-dominant Delta strain, which accounts for nearly all new infections around the world—booster shots raise the level of antibodies against the virus, and under the idea that a rising tide raises all ships, the more antibodies that the body makes against SARS-CoV-2, the more likely that some of those will be able to block different variants.

Indeed, the J&J team presented data showing that adding a second dose, especially six months after the first, raised vaccine efficacy to around 90%.

And, their data also suggested that the immunity generated by its vaccine has a “unique immune profile with antibody titers peaking later, broadly reactive against multiple strains [of the virus] variants, and that persist,” said Dr. Penny Heaton, head of global therapeutics at Janssen Research & Development. That means that the immunity could potentially be longer-lasting, or more durable than that provided by other vaccines. Dr. Dan Barouch, professor of medicine at Harvard Medical School who developed the vaccine in collaboration with J&J, noted that the vaccine “induced a distinct, complex immunologic profile with robust durability.”

As part of that argument the companies highlighted what they see as the defining feature of their vaccine: the triggering of the T-cell response, which is a sort of an immunologic backup to the immediate SWAT team of antibodies that the body deploys when it first encounters a new virus; antibodies can flood the zone quickly but tend to wane after time if the virus isn’t constantly present. The T-cell response, on the other hand, involves memory cells that can remember previous infections, then recognize the threat if it appears again, thus enabling the body to mount reactions more quickly in an ongoing fashion. A booster dose could potentially amplify the size of this process in people immunized with the J&J vaccine.

Before dispersing, the committee also heard results from the just-published and highly anticipated study led by the National Institutes of Health on mixing and matching doses of the three currently authorized vaccines. While the research did not directly compare different combinations, the results support the fact that giving people a booster shot from a vaccine different from the one with which they were originally immunized was both safe and effective. In fact, for the people who initially received the J&J vaccine, getting a boost with an mRNA vaccine—like those made by Moderna and Pfizer-BioNTech—led to levels of virus-neutralizing antibodies around 7-10 times higher than getting a second dose of the same vaccine.

Read more: A New Study Makes the Case for Mixing and Matching the Pfizer-BioNTech, Moderna and J&J Vaccine Doses

Those results highlighted the evolving nature of what scientists know about the protection provided by vaccines, and how best to optimize the shots. Anticipating a steady flow of new studies and new data, some of which may lead to the need to change past recommendations about vaccines, committee members discussed how the FDA will manage expanding the current booster authorizations to the broader population of adults not currently eligible for the boosters (those without health conditions or in high risk settings), and eventually children. With the ever-evolving body of knowledge on vaccines and their effectiveness, the committee stressed that the FDA needs to remain flexible and transparent in how it makes its decisions. Already, for example, each of the three types of boosters are recommended for different populations: anyone who received the J&J vaccine initially is eligible to get a booster, while for those who were immunized with Moderna or Pfizer-BioNTech, only those over age 65, or those 18-64 with health conditions or in high risk jobs are eligible.

Moving forward, “I hope we can present it in a way that’s not confusing to the public,” said committee member Dr. Stanley Perlman, professor of microbiology and immunology at the University of Iowa. “What we do is follow the science, but people who aren’t doing this think the rules are changing all the time. I hope we can do this in a way that doesn’t look like we are just changing the rules all the time.” 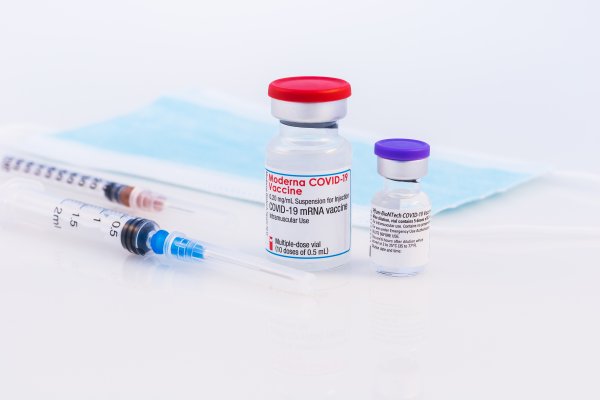 Mixing and Matching COVID-19 Doses Might Be More Effective
Next Up: Editor's Pick