With All Eyes on Washington, the Real Far-Right Threat Has Moved On

A police staging area sits empty and littered with water bottles at the end of the 'Justice for J6' rally near the U.S. Capitol in Washington, DC, on September 18, 2021.
Anna Moneymaker—Getty Images
By Vera Bergengruen

A much-hyped “Justice for J6” rally on Saturday to support individuals being prosecuted for participating in the Jan. 6 attack on the U.S. Capitol was over in little more than an hour.

Inside a crowd that U.S. Capitol Police estimated to be fewer than 450 people, a small group of protestors was dwarfed by a swarm of media and onlookers, and flanked by hundreds of officers in riot gear. The speeches, organized by a previously little-known former campaign staffer for Donald Trump, were short and unremarkable, repeating talking points about the unjust treatment of those charged for their actions on Jan. 6. The crowd chanted “USA!” a few times. While nine members of Congress had been invited to attend the rally, none of them showed.

But anyone seeking to draw conclusions from the paltry turnout about the future of the right-wing groups that stormed the Capitol on Jan. 6 is looking in the wrong place. Ahead of the event, there was little evidence of any mobilization to get members of these groups to attend. The largest, including the Oath Keepers and Proud Boys, discouraged supporters from coming to D.C., saying it was a “false flag” set up by federal officers to entrap them. Critics may have taken satisfaction in the failure of the crowd to materialize, but any sense of relief is misinformed: the groups that staged the deadly attack on the U.S. Capitol have simply shifted their attention closer to home.

More than 600 people have been charged in a sprawling federal investigation in the aftermath of the Jan. 6 riot, driving many of the far-right groups that helped organize it underground. But they haven’t gone away—and repeating the events of Jan. 6 has never been their goal. In the past nine months, many of the same groups have instead been coming together at a more local level. They have gathered at anti-vaccine rallies, QAnon-linked events and community meetings protesting “tyrannical” COVID-19 control measures. They have been congregating on alternative, harder-to-monitor online platforms, urging each other to get over their disappointment about Trump’s defeat and take action into their own hands by running for local office.

Some experts who spoke to TIME compared it to the aftermath of the 1995 Oklahoma City bombing and the subsequent Justice Department crackdown on domestic extremist groups. “These groups go into hiding. A lot of them are kind of laying low and quiet right now,” says Daryl Johnson, a former Department of Homeland Security senior analyst who authored a 2009 report warning of the rise of right-wing extremism in the U.S. “It doesn’t mean that the threat has dissipated, but it’s factionalized.”

This year’s events have only fueled the narratives of some of the more hardened groups that made up the crowd on Jan. 6, including white supremacists and self-styled anti-government militias. Vaccine mandates and other “pandemic-related stressors” have been “driving several plots by domestic violent extremists, and they may contribute to more violence this year,” a DHS bulletin warned in August. The release of 2020 census statistics later that month, which showed that the population of non-Hispanic white Americans had dropped as the country became more diverse, provided endless talking points within white nationalist movements, stoking their “great replacement” fears.

And despite the crumbling of its main premise—that Trump would remain in the White House on Jan. 20—QAnon followers have continued to congregate at large conferences, including one scheduled for next month in Las Vegas. A TIME investigation in April showed how dozens of its adherents, some of whom participated in Jan. 6, have won seats on local school boards and city councils.

“This is a time period in which the hardcore people could get more radical,” says Johnson, noting that the return of mask and vaccination mandates is bringing together regular Americans who see it as an infringement on their rights and creating an opportunity for recruitment in extremist groups. “This is a dangerous time, and while previously these threats were openly visible on social media, now we can’t see everything that’s going on.”

‘This is how we’re going to take back our country.’

Saturday’s rally in Washington was rooted in the idea that the Jan. 6 rioters have been hunted down by a vengeful Democratic administration, a notion that has gained momentum as rightwing media and some elected officials have recast the Capitol attack as a largely peaceful demonstration by pro-Trump demonstrators exercising their First Amendment rights. It’s a message that has resonated in many communities across the country, where people see the rioters’ actions as not criminal but patriotic. “After the next civil war, and when we win, we will be able to write the correct info in our textbooks,” one person wrote on a right-wing forum on Sept. 16. “The future will know who the real patriots are.”

On Saturday, speakers led the small crowd gathered near the U.S. Capitol in chanting the name of Ashli Babbitt, a 35-year-old Air Force veteran and supporter of the QAnon conspiracy theory who quickly became a martyr for some far-right groups after she was killed by a police officer on Jan. 6 while trying to breach the inner chamber of the Capitol where lawmakers were sheltering.

Ahead of the “Justice for J6 rally,” furious debates unfolded on right-wing forums and messaging apps over whether or not it was a good idea to attend. One widely-shared meme showed a uniformed agent with an FBI patch poking a figure representing far-right groups with a stick urging them “C’mon, come to DC.” The event was denounced by prominent figures in the movement, including retired Gen. Michael Flynn and former President Donald Trump himself, who called the event “a setup.”

“We need spontaneous rallies to form that they can’t infiltrate,” one user on a pro-Trump message board said on Sept. 17. “What would be far, far more effective is if…you find fellow patriots and simply have a protest at your local town center.” Another agreed: “I think that’s a much stronger message than a televised (and false-flag) event from the middle of the Imperial Capital.”

Others expressed frustration with what they saw as a timid approach. “If there ever has been a time to protest, it’s now, but we’ve been manipulated into this position where people don’t feel safe exercising their rights under the threat of being set-up,” one person posted on a rightwing messaging app. “WHEN will be a better time?”

Ultimately, regardless of the headlines about the rally’s low turnout, the event’s message of keeping up the fight resonated on Saturday far beyond the small crowd in Washington. “This battle doesn’t end today,” Matt Baynard, the former Trump campaign aide who organized the event, told the crowd. “In fact I think this is the beginning…of the ‘America First’ right taking over community organizing in this country.”

Listening to the speech under the shade of a tree by a police line, a man who would only give his first name, Tom, showed TIME text messages from his brother in Olympia, Wash., who planned to attend a local anti-vaccine mandate rally with the Proud Boys and other far-right groups later in the day. “It’s not really about coming here to yell outside the Capitol or the White House,” he said, tapping his phone. “This is how we’re going to take our country back.” 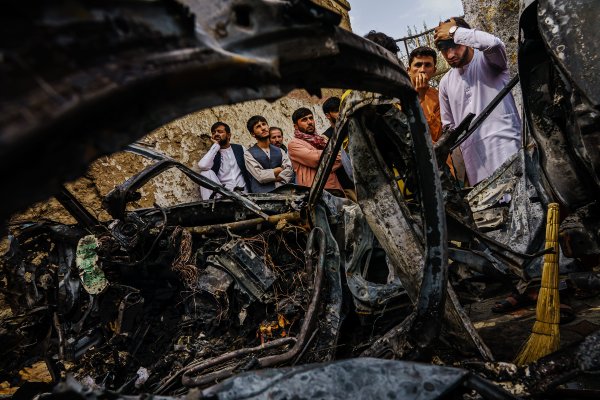