How 9/11 Radically Expanded the Power of the U.S. Government

Two decades ago, the deadly terror attacks on 9/11 changed nearly all aspects of American life. Culture shifted, imbued with heightened levels of fear. The U.S. launched costly, deadly wars. Congress passed sweeping legislation. The government profiled and watched its own citizens, ushering in a new era of mass surveillance.

One of the most significant—and lasting—changes was a massive expansion of executive power that transformed entire portions of America’s legal landscape. Within months of the attacks, the George W. Bush Administration had authorized spying on Americans, a new secretive military tribunal system, and begun secretly detaining men from Muslim and Arab countries. There have been attempts to roll back some of these policies in the years since, but many post-9/11 developments have remained in place, impacting America’s use of force abroad, immigration and surveillance policies, and the delicate balance of separation of powers.

These changes altered the way Congress, the judiciary and the President interact—and reshaped the relationship many Americans have with their own government. Administrations took aggressive actions in the name of protecting their citizens, but as revelations emerged detailing some of the abuses that ensued, public distrust in American institutions has risen. One of the defining questions of the post-9/11 legal landscape has become how to negotiate protecting national security with managing swelling presidential power—and rebuilding confidence in American government itself.

“There’s just no [easy] institutional avenue to rein in this accretion of power in the executive branch through the coordination of the three branches,” says Scott Anderson, senior editor of Lawfare who served in the State Department under President Barack Obama. “I think the big question we’re going to face over the next few years is: How do you recalibrate?”

It’s clear the changing national security interests over the past 20 years have dramatically reshaped aspects of American law and presidential power. What is less clear is how to interpret those changes.

“The most potent weapon in preventing terrorist attacks is intelligence,” says George Terwilliger, a member of the conservative Federalist Society and the former Deputy Attorney General under President George H. W. Bush. “I think one of the legal legacies of 9/11 is the government’s ability to collect [and analyze] that kind of information…That enhancement has been very important and needs to be maintained.”

But for Debra Perlin, the director of policy and program at the progressive American Constitution Society (ACS), many of those changes are a “cautionary tale” of rash decision-making. “When a president has what appears to be unlimited powers… the only thing holding them back are the norms of the office of the presidency and their own personal accountability,” she says. “Fail-safes that we have all painfully learned can be insufficient.”

Here are some of the key legal arenas that were shaped by 9/11.

Shortly after 9/11, the Bush Administration declared a war on terrorism to go after the perpetrators of the deadly attacks. But to execute such a complex war, argued then-Attorney General John Ashcroft, the U.S. would need more tools to gather intelligence.

Beginning in the weeks after 9/11, the Department of Justice’s Office of Legal Counsel issued memorandums authorizing a raft of unprecedented executive powers. These included the legality of “enhanced interrogation techniques”—tactics that subsequent Administrations and a years-long Senate investigation later concluded constituted torture.

“The government’s core responsibility is to protect American citizens from attack and violence,” argues Terwilliger. “I think there’s a recognition both in legislation and in court decisions that some extreme measures have to be measured against the scope of that core responsibility.”

The executive branch’s assertions didn’t go unchallenged. In 2006’s Hamdan v. Rumsfeld, for example, the Supreme Court ruled that the military commissions system was unconstitutional because it needed Congressional authorization. But Congress passed the 2006 Military Commissions Act shortly thereafter granting that authority, which marks a crucial dynamic at play in this era: Congress and the Bush Administration worked jointly to expand the White House’s reach in the years after the attacks. “Essentially you saw Congress facilitating the expansion of executive branch power,” says Anderson. “This is, I think, more of the defining separation of powers moment of the post-9/11 era than any sort of unilateral assertion of executive branch power.” Generally speaking, he says, “courts really seemed hesitant for a very long time to second-guess the political branches, so long as they were working together.”

Sometimes other branches of government did step in to rein in the White House. In 2008’s Boumediene v. Bush, for example, the Supreme Court disagreed with both political branches, ruling that the 2006 Military Commissions Act—which included a provision banning foreign detainees labeled “enemy combatants” from challenging their detention in court—was illegal because it unconstitutionally suspended the detainees’ writ of habeas corpus.

Even still, executive power continued to balloon in the years after 9/11, often bolstered by legislation and court rulings.

The Authorization for Use of Military Force

Perhaps the most prominent example of Congress furthering executive authority was its passage of the Authorization for Use of Military Force (AUMF) on Sept. 18, 2001—a joint resolution green-lighting the U.S. military to go after the perpetrators of 9/11.

The AUMF included unusually broad language, authorizing force against anyone who “planned, authorized, committed, or aided the terrorist attacks that occurred on September 11, 2001, or harbored such organizations or persons.” It was widely popular: only one lawmaker in Congress voted against it: California Democratic Rep. Barbara Lee.

The significance of the AUMF has only grown since its passage. In the past 20 years, multiple presidents have interpreted the AUMF to extend their authority beyond solely targeting al-Qaeda and the Taliban in Afghanistan, to cover operations in Iraq, attacks on ISIS, and numerous military deployments in other countries including Yemen, Somalia and Libya. Just this summer, the Biden Administration executed an airstrike in Somalia—by invoking the AUMF of 2001. To this day the full list of groups covered in the AUMF remains classified, so Americans don’t even know how many operations it authorizes.

Oona Hathaway, a professor of international law at Yale Law School, says that the modern interpretation of the AUMF “massively expanded beyond what Congress initially envisioned.” It also set a dangerous precedent, she argues, “that Congress might pass an authorization that it means to be very narrow or limited, and presidents can interpret those authorities in increasingly broad and creative ways.”

The growth of surveillance

As the War on Terror began, so too did the increase of the U.S. government’s surveillance of its own citizens.

Some programs were launched by the Bush Administration in secret, such as the President’s Surveillance Program (PSP), a set of secret intelligence activities authorized by Bush in 2001. PSP included the warrantless wiretapping of communications of people thought to be connected with al-Qaeda, and the warrantless collecting and mining of Americans’ phone and internet metadata. Codenamed “STELLARWIND,” the program slowly came to light over the following decade, first in a New York Times report in 2005 and more extensively in 2013 when the Washington Post and the Guardian published an internal report leaked by Edward Snowden that detailed the operations.

“For me, the biggest [legacy of 9/11] is the radical increase in government secrecy, and attempts to keep as much government surveillance as possible hidden from the American people,” says Patrick G. Eddington, a senior fellow in homeland security and civil liberties at the libertarian Cato Institute.

Congress also took several steps that furthered surveillance, including passing the Patriot Act in 2001, which drastically expanded surveillance tools used by law enforcement to investigate crimes. Among many controversial provisions, the Act included Section 215, which allowed for the collection of business records or any other “tangible thing” considered “relevant” to an international terrorism, counterespionage, or foreign intelligence investigation. It also included what was known as the “sneak and peek” provision, which allowed law enforcement to search citizens’ homes and offices without notifying them at the time of the search.

“As a result, the government has much more power than it needs, actually, to go after people that have done nothing wrong,” says Russ Feingold, the president of ACS who was the only U.S. senator to vote against the bill during its first vote in 2001, when he served as a Democrat from Wisconsin. Feingold points out that in the 10 years after the Patriot Act, only 1% of cases using the “sneak and peek provision” were terrorism-related.

Predominantly Black and brown communities—and in particular Muslim communities—are most directly impacted by this surveillance. “For many communities of color, especially the Muslim community, the government has deployed extraordinary surveillance and racial profiling,” says Shirin Sinnar, a professor of law at Stanford Law School. “And a lot of this has become routine, and extremely difficult to challenge in court.”

America’s immigration system was dramatically overhauled in the wake of 9/11, once courts and lawmakers began to perceive immigration as a national security issue.

In 2002, Congress created the Department of Homeland Security (DHS), incorporating 22 federal agencies in the largest reorganization of the federal government since World War II. Many units of DHS, including the Immigration and Customs Enforcement (ICE) and Customs and Border Protection (CBP), were given broad discretion and deep resources to enforce immigration laws both at the border and at the interior of the country.

Many Muslim, Arab and South Asian communities were profiled, targeted and detained under America’s new immigration policies. In the months following the attacks, the government detained over 1,000 men from mainly Arab and Muslim countries. They were arrested secretly and tried in secret hearings, using secret evidence, says Muzaffar Chishti, a senior fellow at the Migration Policy Institute. “And [most] of these things were challenged. And because the judges were so deferential [to national security claims]… all of them were upheld.”

DHS launched the National Security Entry-Exit Registration System (NSEERS) program, also known as “special registration,” in 2002, which required men of a certain age who were non-citizens from 25 countries—24 of which were Muslim majority—to report to immigration offices to be interviewed, fingerprinted and photographed. According to the New York Times, out of the roughly 85,000 people registered in the program by 2003, only 11 were found to have ties to terrorism. The program was ultimately discontinued in 2011.

More enduring has been the DHS’ Secure Communities program, launched in 2008 under Bush, which formed a database in which federal, state and local law enforcement agencies shared information, including the matching of fingerprints. Now, if an undocumented immigrant is arrested for a traffic violation, ICE would be flagged. “Every single local cop has become [a potential] outpost of the federal immigration authority,” says Chishti. The database allowed for mass levels of deportations never before seen in the U.S., and ultimately led to backlash and the rise of “sanctuary cities” during Donald Trump’s presidency, which help shelter undocumented immigrants.

“The machinery of immigration could not be anywhere as formidable as it is without the policies put in place after 9/11,” says Chishti. “No matter what aspect of immigration policymaking we try to embark on, national security now is this constant checkmate.” 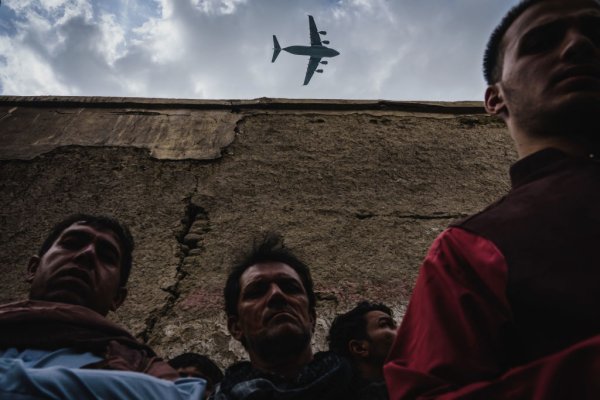 U.S. Vows to Continue Fight From Afar
Next Up: Editor's Pick