American Rust Sounds a Lot Like Mare of Easttown. Sadly, It Isn’t

American Rust opens with a montage of small-town denizens taking their morning drugs. In the first shot of the Showtime crime drama, protagonist Del Harris—a psychologically fragile police chief played by Jeff Daniels—crushes two prescription pills with a mortar and pestle, weighs the resulting powder on a digital scale, flicks just the right amount of it into his coffee, then hesitates before finally swallowing a third pill. Meanwhile, Del’s love interest Grace Poe (Maura Tierney) takes a break from sewing beads onto a wedding dress at Gelsey Dressmakers to pop over-the-counter painkillers. Grace’s adult son Billy (Alex Neustaedter) starts the day with a tallboy of PBR on the porch of the Poes’ shabby home. His buddy Isaac English (David Alvarez) pesters Isaac’s disabled father Henry (Bill Camp) into taking a sleeping pill. “Free drugs is free drugs,” Grace drawls, between drags of a bad bummed cigarette. Welcome to Buell, Penn.

The point, like so many things in the show, is obvious: we have entered a place so desperate and depressing, locals can’t get through a day without medicating themselves. For anyone who managed to miss it, there’s a scene a few episodes later where a medical examiner documents a homicide autopsy at the bottom of a chart where every single other entry lists the cause of death as drug overdose. American Rust, which premieres on Sept. 12, sounds a lot like HBO’s recent hit Mare of Easttown on paper. Both cast famous actors as cops investigating murders in small, working-class Pennsylvania communities where everybody knows everybody. The difference is that Mare highlighted the specificity of its setting and characters, while Rust merely reproduces the grim clichés that abound in prestige-branded portraits of rural America.

Adapted from Philipp Meyer’s acclaimed debut novel, the show translates the book’s rich stream-of-consciousness prose into a flat, run-of-the-mill murder mystery, casting Daniels as the most generic detective antihero you can imagine. Haunted by his years on the Pittsburgh police force and, before that, his experience in the Gulf War, Del has deep thoughts to share about the root causes of violence: “Maybe that’s just what men do,” he says. “I don’t know. But it’s definitely what young men do.” (Never mind that, if he’s supposed to be the same age as the actor playing him, he would’ve been in his mid-30s by the time he reached the Persian Gulf.)

When he finds a dead body in the town’s disused steel mill, and immediately recognizes the victim, it isn’t hard to see how his insights into machismo might inform his investigation. Arrested six months earlier following a street fight and, thanks to Del’s intervention, sentenced to probation, former high-school football star Billy might be implicated in this act of violence as well. He and Isaac—a gifted young man who’s so frustrated by his inability to escape this place that, early in the show, he casually attempts suicide—certainly seem to be keeping a big secret.

As in Mare, the murder functions mostly as a way into the daily life of Buell’s universally unhappy residents. Billy carries a torch for Isaac’s older sister Lee (Julia Mayorga), his high-school sweetheart and this story’s obligatory young person who escaped; in the premiere, she calls her dad from an immaculate New York apartment to tell him she’s married a law-school classmate the family has never met. Tormented by constant hand pain, Grace narrowly escapes losing her home thanks to the quasi-legal sabotage of a foreclosure auction by the two men in her life—Del and her actual husband, the transient, philandering Virgil (Mark Pellegrino). In her ample spare time, she’s trying to organize Gelsey’s workers. Walking tropes are everywhere, from the pregnant bride marrying a guy named Jimbo to the guy brainwashed by cable news to hate Mexicans despite having fathered kids with a Mexican-American woman.

It’s not that characters and situations like the ones depicted here don’t exist in real Rust Belt towns. What pushes the show into the same misery-porn territory as Hillbilly Elegy is the impression executive producer, writer and showrunner Dan Futterman (The Looming Tower) creates that every stereotypical horror of rural life is happening to every person in every corner of Buell at all times. Rust doesn’t seem aware that people who are struggling might not feel sad 24 hours a day. Not even Daniels, Tierney and Camp—all great, as usual—can breathe much vitality into these underwritten sadsacks. In one scene, Del describes a hallway as smelling like “the opposite of happiness.” Did the shooting scripts get doused in the same cologne?

Mare was no full-throated celebration of Easttown, nor would such a cheery tone have been appropriate to the material, but it did give due consideration to the benefits of making your home among old friends and extended family (even if they turned out to be harboring a horrible secret or two). And, crucially, the show had something novel to say about the roles women end up playing in communities that take male rage as a given. American Rust never approaches that level of insight in the three (out of nine) episodes sent to critics, and nothing about its expository dialogue or unimaginative character backstories suggests that such profundity will be forthcoming. This is America! the show keeps shouting. And maybe, in a limited sense, that’s true. But it’s an America we’ve seen, through the same haze of Hollywood pity, too many times before. 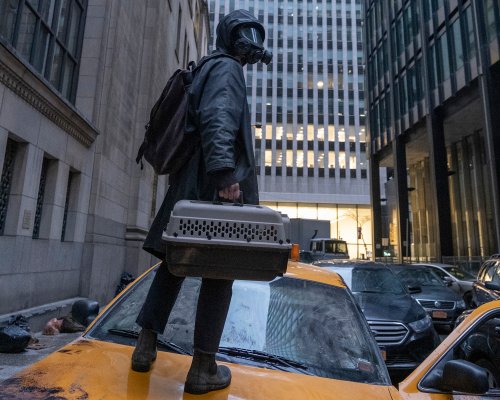 FX’s Epic Y: The Last Man Adaptation Gets Off to a Shaky But Intriguing Start
Next Up: Editor's Pick