Sally Rooney and the Art of the Millennial Novel

What does it mean to be a millennial? Bards of the generation across disciplines have varied takes: Taylor Swift’s catalog proposes a shared identity defined by a fixation on teenage heartbreak. Michaela Coel’s TV shows posit a tension between inner trauma and outward behavior. And Sally Rooney’s fiction suggests a reliance on the Internet and a defining awareness of the ever nearer end of the world.

These three artists belong to a larger wave of creators who have captured the zeitgeist of what being a millennial means, living at the intersection of preoccupations both existential and mundane. Their works, as well as the introspective albums of Frank Ocean, Issa Rae’s insightful Insecure, Lena Dunham’s controversial Girls and more cultural touchstones from the millennial set, reflect a range of experiences specific to a generation that came of age with the rise of a life lived increasingly online and the growing threats of climate change, gun violence and political polarization.

That edge of pessimism anchors Rooney’s best-selling fiction. The Irish writer, 30, a self-­proclaimed Marxist, arrived on the scene in 2017 with her debut, Conversations With Friends. The book explored the complicated dynamic between two best friends and a married couple, and how their varying intellectual and political beliefs shaped their tensions. Normal People, her next novel, followed an on-again, off-again romance between two teenagers into their university years, pulling a thread of domestic violence and female subjugation. Both books feature a detached writing style, details fraught with angst and, perhaps most significantly, refreshingly realistic text-message exchanges between characters enduring quietly tormented love lives.

When Sally Rooney made her debut, the New York Times gave her a weighty distinction: the “first great millennial novelist.” But what does that even mean? What are the qualities of a millennial novel—and who else is writing them?

Eliana Dockterman: Existential dread has been a theme of “generational” novels for as long as novels have existed. Some of the seminal books in American literature—On the Road, Rabbit Run, Catcher in the Rye, really anything by Ernest Hemingway or, even more recently, Jonathan Franzen—focus on straight, white men realizing the world is broken, spinning out in their personal lives and leaving destruction in their wake. What’s different about the “millennial novel” is that more female, queer and BIPOC characters get to confront the impending collapse of society. A book like My Year of Rest and Relaxation—set in the months leading up to 9/11, arguably the first moment many millennials experienced the existential dread that has haunted us through two economic collapses, contentious elections and a pandemic—captures the general “we’re effed” mood that’s particular to this moment.

Annabel Gutterman: Dread for sure, and I find the most successful millennial novels tackle thorny issues related to money and class (cough, Normal People, cough) and feature characters dealing with economic anxiety. I was obsessed with Kiley Reid’s Such a Fun Age when it came out, and that was definitely due in part to the inclusion of a protagonist who was motivated to work for health insurance. It was refreshing to read about a 20-something who wasn’t driven by a need to fulfill a really lofty and unrealistic goal. She just wanted to pay for her life.

Cady Lang: Works that capture the ephemeral and ever-changing ways we communicate in our digital world to me feel like the most cogent examples of the “millennial novel.” This is what Rooney does so well, harnessing the relatable minutiae of our everyday routines—the intimacy of G-chats pounded out between emails, the gray bubble of ellipses typing then abruptly stopping, messages left on read in a calculated show of indifference—but in doing so, she unflinchingly pulls back the curtain on our most vulnerable interior thoughts. Maybe it’s due to technology, but the chance for love always seems to be slim in millennial novels. Everyone is very horny, but also very miserable and horrible at communicating.

Most of us are millennials. What do millennials want and need to read? And, to ask a very Rooney-esque question: Does reading even matter when the world is ending?

AG: Well, to quote from Beautiful World, Where Are You, here’s something Alice wrote to Eileen: “So of course in the midst of everything, the state of the world being what it is, humanity on the cusp of extinction, here I am writing another email about sex and friendship. What else is there to live for?” And Alice is right. Both things can be true: a break-up can ruin your life just as climate change is destroying the planet.

CL: I think what we’re craving right now is truth with a healthy dose of levity. Our sobering reality is marked by huge (and systemic) social, political, environmental and economic problems that can’t be solved by simply shunning plastic straws. The future will undoubtedly be filled with challenges—and it will be unbearably grim if we can’t look at it with a bit of humor.

Mahita Gajanan: Books might not save us all, but they do help us process the inexplicable things about life. Eileen and Alice discuss this at length in Beautiful World, and although they are always torn, there’s something special about how they do find their way to each other.

Who were the Sally Rooneys of the past—do these writers held up as voices of their generations have anything in common?

MG: Franzen for sure, and I think he shares with Rooney a fascination with—and a talent for—writing about domestic drama. Should we also talk about Donna Tartt? Jeffrey Eugenides? David Foster Wallace? Jay McInerney?

ED: We relate, say, in Tartt’s The Goldfinch or Eugenides’ Middlesex, to their characters’ loneliness. Rooney’s characters are similar, but she nails a distinctly millennial trait: miscommunication via the internet. Those of us who grew up online are particularly bad at saying how we actually feel. Rooney is a master at showing how, exactly, we’ve all ended up so isolated.

Judy Berman: I would also add Tama Janowitz, who isn’t read as much these days as the rest of the Gen X “brat pack” (which included McInerney, Tartt and Bret Easton Ellis, among others), but whose debut story collection Slaves of New York feels like a pretty direct precursor to Rooney. The characters are mostly young, self-destructive, artsy or art-world-adjacent women in bad relationships. That said, I do find Janowitz, Ellis and many other Gen X novelists to be more solipsistic than the current wave of millennial authors, including Rooney, who are so concerned with the fate of our (cursed?) generation, not to mention the uncertain future of the human race.

Rooney has captured the attention of millennial readers, but who are other artists and creators who have done the same in other forms?

CL: I think a lot about how Frank Ocean broke boundaries with both Channel Orange and Blonde, how he forged his own fiercely independent path in the industry and how revolutionary his mere existence was when he first broke through. Photographers like Petra Collins and Ren Hang have completely shaped millennial aesthetics. Rihanna is the poster child for the millennial multi-hyphenate. And Drake and Taylor Swift, though very different artists, have had remarkably parallel rises to global pop superstardom characterized by their savvy manipulation of both the industry and their personal brands—another marker of millennial-specific success.

AG: Of course, I will agree with Cady on Taylor Swift. And not saying this is me (but it’s also not not me), but there is a whole audience of white girls who are obsessed with Sally Rooney books, only listen to Taylor Swift, watch Fleabag and probably carry around a tote bag with Joan Didion’s face on it.

CL: I mean, there’s a certain level of comfort and pleasure and certainly projection for white women to derive from reading about Rooney’s thin, upper-middle-class, white anti-heroines, isn’t there? Just as there is for them to identify with Swift, Didion and Phoebe Waller-Bridge. Their relative struggles are validated, but not really in context with their privilege. Maybe this is the real discussion we should be having about the domestic novel!

JB: Lena Dunham was a lightning rod for elder millennials in the same way that I think Rooney is becoming for younger millennials, and the differences between them say a lot about what’s changed in the past decade: in aggregate, young adults are queerer, more pessimistic but also more politically and socially engaged than they were in the early 2010s. The sad girls and boys of current pop—Frank, Drake, Phoebe Bridgers, Mitski, even quarantine-era Taylor—are analogous for a lot of the same reasons. Personally, though, I think the best comparison to Rooney at this point is Michaela Coel. Both are very concerned with how the personal interacts with the political, the generational and the universal. But what makes Coel a more exciting artist, for me, is that she has yet to do the same thing twice.

Finally, the burning question for every Rooney fan: how would you rank her three books?

ED: Before reading Beautiful World, Where Are You, I probably would have said that Conversations With Friends was my favorite. It was the first Rooney book I read, and I was blown away by how true-to-life the G-chats and text messages were, mixing philosophical and emotional observations. But those same literary tricks annoyed me when deployed in Beautiful World, which in turn gave me a newfound appreciation for Normal People. After reading Beautiful World, I knew what each of the characters’ political viewpoints were, but I was less clear on what they were like as humans. I kept thinking about Connell and Marianne from Normal People and how every bad choice each of them made was rooted in insecurities we’d seen develop over years—about their respective financial situations, popularity, history with depression, family dynamics and experiences with abuse. I hope in her next book, Rooney returns to these deeper character studies.

CL: For me, Conversations with Friends, with its messy yet measured chaos, still remains my top Rooney novel, then Normal People, and then Beautiful World, Where Are You. Although if I am being completely honest, the very good Hulu adaptation of Normal People last summer almost bumped it up to number one.

JB: I guess I’m going to be the outlier who likes Normal People least. For me, that book was too much like a thought experiment: create two characters who fit together perfectly, then put the power dynamics in their relationship on a seesaw for several years and see whether they can make it work. I prefer the two books with bigger casts of characters who bump up against each other in ways that aren’t always predictable, and maybe it’s just a case of diminishing returns, but Conversations With Friends is still my favorite. 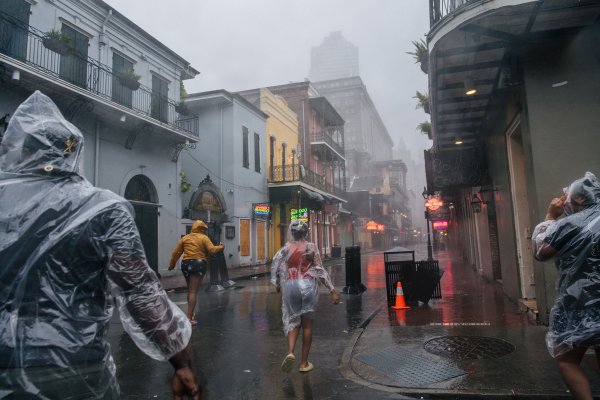 Why We New Orleanians Keep Coming Back After Every Storm
Next Up: Editor's Pick