Kanye West's Controversial Donda Is Finally Out. Here's What You Need to Know

After many delayed release dates, three dramatic listening events and rumors online of new developments in a longtime beef with Drake, Kanye West’s new album Donda dropped on Sunday amid a swirl of controversy that should hardly come as a surprise from an artist who unironically wrote a track titled “I Am A God” and once claimed that slavery was “a choice.”

While Donda, a whopping 27-track project named for West’s mother, has ample material to spark dialogue among fans and critics, most of the conversation surrounding the album has centered on West’s third and final listening party, held Thursday night in his hometown of Chicago. At the show, where, among other moments, West set himself on fire in front of a replica of his childhood home and Kim Kardashian made an appearance in a Balenciaga haute couture wedding dress, the rapper also brought out Marilyn Manson and DaBaby on stage—sparking swift outrage from viewers for his apparent support of both artists. Manson is currently facing four lawsuits alleging sexual abuse, while DaBaby was blacklisted from several music festivals after making homophobic comments last month.

The drama continued after the album’s release on Sunday. On Instagram, West alleged DaBaby’s manager wouldn’t clear the song “Jail pt 2” for use (DaBaby’s management has denied this claim and the song is now part of the album on all streaming platforms). Later on Sunday, West also claimed that his parent label, Universal Music Group, put out his album without approval and said they were responsible for blocking “Jail pt 2.” Donda’s release has also been critiqued on social media by West collaborators like Soulja Boy and Chris Brown, who were unhappy with the final lineup of the album.

West’s Chicago listening party, held on Thursday, was polarizing before it even began. The event, held at Soldier Field and live streamed on Apple Music, garnered early criticism after it was announced that there was no requirement for proof of vaccination or a negative COVID test to attend.

Much like West’s previous Donda music preview events, the listening party included several spectacles. The stage was built around a replica of West’s childhood home on the South Side of Chicago, complete with a front porch and a stoop, where he later appeared with Manson and DaBaby. The house also included a large cross on its roof, nodding at the religious themes both on the album and in West’s recent creative pursuits, like his controversial Sunday Services.

West, masked for much of the show, set himself on fire as way of a dramatic finale stunt, while soon-to-be ex-wife Kim Kardashian, clad in a Balenciaga haute couture wedding dress, made a cameo in a seeming re-enactment of their 2014 wedding during the track “No Child Left Behind.”

Backlash grows with the appearance of Marilyn Manson and DaBaby

West’s provocative choice to include Manson and DaBaby—not only bringing them on stage at the listening party but also featuring them as collaborators on Donda—has prompted criticism.

Manson, currently facing four sexual assault cases, has been accused of rape, domestic violence, grooming, and abuse by at least 15 women, including actors Evan Rachel Wood and Esmé Bianco. Wood has also alleged that Manson regularly used racist and anti-semitic slurs. Following these allegations, Manson was dropped by Loma Vista, his record label, as well as his talent agency and manager.

In a statement to People, Manson’s spokesperson confirmed that the musician is working with West and featured on Donda. “He will continue to conceptually collaborate with Ye on the DONDA project,” the representative said.

DaBaby has been a controversial figure throughout his career, from violent incidents breaking out at his concerts and in his personal life to his mocking of Jojo Siwa in lyrics. In the last month, DaBaby has been criticized for making homophobic and stigmatizing comments about HIV during the Rolling Loud festival, where he also brought out Tory Lanez, the rapper who allegedly shot Megan Thee Stallion, to perform on stage with him, following Megan’s set (this appearance also violated the restraining order Megan has against Lanez). Following the backlash of his comments and being dropped from music festival gigs, DaBaby offered a non-apology on social media, which he subsequently deleted.

West has defended DaBaby’s presence on Donda, saying that he “was the only person who said he would vote for me in public.”

Donda‘s extensive track list is filled with features from a veritable smorgasbord of talent, including longtime collaborators Jay-Z, Jay Electronica, and Kid Cudi, as well as artists like Travis Scott and The Weeknd. But not everyone was thrilled with the final track line-up for Donda. On Twitter, rapper Soulja Boy voiced his displeasure with being left off a track that he alleged he was asked to be on, while Chris Brown, an artist with a problematic past of his own, also turned to social media in a now-deleted post to sound off on West’s handling of his feature on Donda.

West’s collaborators weren’t the only ones who were churlish with Donda‘s release; West himself expressed dissatisfaction with the rollout. West alleged on Instagram that Universal Music Group, the parent label to Def Jam, released Donda without his approval and that they were part of the reason why “Jail pt 2,” the track that DaBaby was supposed to be on, was not included on streaming. The track is now available to stream on both Tidal and Spotify.

About that possible beef with Drake…

In a now-deleted, very cryptic Instagram post leading up to Donda‘s release, Kanye appeared to show a screenshot text exchange with Drake that hinted at what many fans have believed is a longtime beef between the two rappers.

Drake, for his part, is not doing much to quell the rumors. In fact, his upcoming release of his much-anticipated new album, Certified Lover Boy on this Friday, September 3, feels like it could be a definite bid for an album showdown. 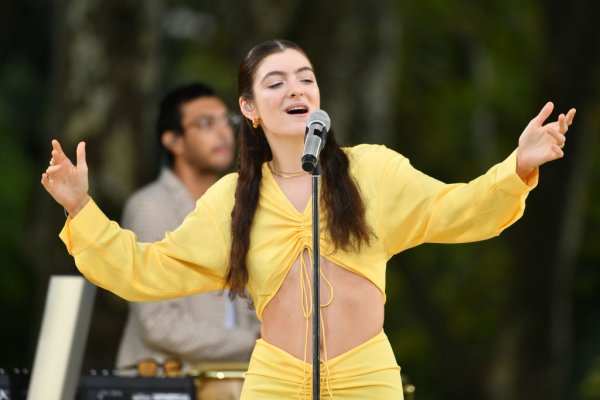 Why Lorde’s Solar Power Is a Pop Oddity
Next Up: Editor's Pick