'Better to Stay Ahead of It.' Why the White House COVID-19 Strategy Now Involves Vaccine Booster Shots

By now, many public health experts, and the public for that matter, have accepted that vaccinated people may need another dose of whichever COVID-19 shot they received in order to better protect against new variants of COVID-19. And on Aug. 18, the White House endorsed a third dose for those who received either of the two-dose Pfizer-BioNTech or Moderna vaccines. People who received the single-shot Johnson & Johnson/Janssen vaccine may also need an additional dose, but the relevant studies are still ongoing. For now, the government plans on rolling out Pfizer and Moderna booster doses the week of Sept. 20, beginning with people who received their last dose eight months earlier.

Booster shots still need to be authorized by the U.S. Food and Drug Administration (FDA). Only Pfizer-BioNTech has submitted relevant data to that agency so far; Moderna and Johnson & Johnson are still compiling safety and efficacy data on their additional dose and plan to submit their results to the FDA in coming weeks and months. Once the FDA authorizes boosters, the U.S. Centers for Disease Control and Prevention’s (CDC) Advisory Committee on Immunization Practices (ACIP) needs to endorse the extra doses, and outline who should receive them and when. (The FDA and ACIP have already authorized a booster dose for certain people who are immunocompromised because they have received organ transplants or have other conditions that prevent their immune systems from responding adequately to the vaccines.)

White House chief medical advisor Dr. Anthony Fauci and CDC Director Dr. Rochelle Walensky said during an Aug. 18 briefing that the White House’s decision to move forward with booster shots for all American adults was based on recent data from vaccine makers, state health registries and academic studies, all of which point to a concerning trend: a decline in the protection provided by vaccines and, according to Walensky, “worsening infection among vaccinated people over time.” For now, the data continue to show that two doses of the mRNA vaccines from Pfizer-BioNTech and Moderna provide good protection from severe illness, hospitalization and death. But Fauci and Walensky noted that if the early signs of waning immunity continue to develop, then worse COVID-19 outcomes could follow. To prevent that from happening, the Biden Administration laid out plans for distributing boosters in a tiered fashion, similar to the approach used in doling out the original shots. Residents of nursing homes, health care workers and first responders will be first to receive the extra doses if and when they are authorized.

Whether booster shots can slow the spread of SARS-CoV-2, the virus that causes COVID-19, remains unclear. For now, health officials are going on indirect lines of evidence—some of which is strong, but inferential nonetheless. They’re working on the assumption that viral levels found in the nasal passages of infected vaccinated people are much lower than those in unvaccinated infected individuals, and that lower viral load should translate into lower transmissibility and therefore less contagiousness.

“It’s entirely conceivable that [boosters] would be important in lowering the level of virus in the nasopharynx, which could impact transmission,” Fauci said, referring to the deeper part of the nasal respiratory system. “We certainly hope that’s the case. If it is, then we could really get multiple benefits from [boosting]—benefits in reducing severity of disease and ultimately transmission and infection. But the bottom line is that we don’t know that right now.”

The FDA has yet to determine that booster shots are both safe and needed. But Fauci stressed that staying ahead of the virus and preparing for booster shots is the best way to tamp down the growing threat of the Delta variant. “If you wait for something bad to happen before you respond to it, then you find yourself considerably behind in the full capability of your response,” he said. “You don’t want to find yourself behind and playing catch up. Better to stay ahead of it than chasing after it.”

The data on which health officials based their updated booster recommendation included results from a New York City study that showed the effectiveness of the COVID-19 vaccines in preventing infection with SARS-CoV-2 dropped from 91.7% in May to 79.8% by the end of July, by which time the Delta variant was the dominant strain in the area (most of the people studied received either the Pfizer-BioNTech or Moderna vaccines, with only about 9% receiving the single dose Johnson & Johnson/Janssen shot). In another national study of nursing home residents conducted by the National Healthcare Safety Network, researchers found that vaccine effectiveness in protecting people from getting infected with SARS-CoV-2 was 74.7% prior to the emergence of the Delta variant, but dropped to 53.1% by the end of July.

In addition to the data generated within the U.S., health officials have also been poring over information from Israel, which has been serving as a vaccination bellwether for the world, since health officials there were able to quickly vaccinate a significant percentage of the population. The latest data from the Israeli health department shows that immunity (as measured primarily by antibody levels) waned among people who received two doses of the Pfizer-BioNTech vaccine after about eight months. After reaching a peak of 81% effectiveness against severe COVID-19 disease among Israelis in March 2021, the protection from two doses of the Pfizer-BioNTech shot against severe disease started to wane in April, sliding to 69.4%. And likely because of that, after dropping significantly, new infections have climbed again in Israel, primarily due to the emergence and quick spread of the Delta variant.

That decline in effectiveness has contributed to breakthrough infections among vaccinated Israelis. According to the Israeli data, by early August, 341 out of 100,000 people who received two doses of the Pfizer-BioNTech shot by January had tested positive, 196 out of 100,000 who had been fully vaccinated by February tested positive, and so on throughout 2021, a trend that strongly suggests that the immunity provided by the vaccine is strongest soon after the second dose but starts to drop off months later. Indeed, it was a strong enough signal that on July 29, Israeli health officials approved a third dose of the vaccine for people 60 years or older as new infections continued to climb. Early data among the small percentage of older people getting a third dose suggest that their new infection rates are lower, but it’s too early to determine what impact the additional dose will really have.

The idea of a booster dose is to bring people’s immune defenses—specifically antibodies—back up to the level generated soon after the last vaccine dose. It’s a well-established principle in immunology that antibodies tend to decline in number over time, whether it’s after people get vaccinated or get naturally infected with a virus. The vaccines were never designed to protect completely against getting infected with the virus, only from getting severely ill after getting infected. “These vaccines were never intended to be a force field,” says Dr. Kirsten Lyke, professor of medicine at University of Maryland who has led some of the vaccine studies.

When antibody levels start to dip, however, they can be boosted. Reassuring data from people who were naturally infected with SARS-CoV-2 and then vaccinated suggest that immune boosts are indeed possible with COVID-19. The same phenomenon should mean that people who never had COVID-19 but were vaccinated and generated SARS-CoV-2 antibodies could also get a surge in these antibodies if they receive another dose of vaccine. “Once the immune system makes antibodies against something, re-exposure will boost those antibodies back up to high levels again,” says Dr. Otto Yang, professor of medicine and associate chief of the division of infectious diseases at University of California, Los Angeles. “There’s no reason that somebody whose antibodies dropped after vaccination shouldn’t also have a large jump in antibodies if they receive a booster dose.”

The antibodies generated by the vaccine tend to provide a broad spectrum of protection against different types or variants of SARS-CoV-2, so the more antibodies a person develops in general, the more likely that a good proportion of them will be targeted against specific variants like Delta, which is now the dominant form of the virus in the U.S. and in many other parts of the world. With each vaccine boost, the immune system adapts to generate more targeted antibodies. And the immune system is just as clever as the virus: in the same way that SARS-CoV-2 can mutate to evade drug treatments or vaccine-induced immune cells, the antibody-producing cells in the body get selected for the effectiveness of their output. Cells making antibodies that bind more tightly to SARS-CoV-2 and disable it are rewarded by getting stimulated more frequently to make more of these virus-destroying antibodies. “The cell with the best advantage [for binding the virus] will over-grow compared to its peers,” says Yang. “Continued exposure with additional vaccination gives these cells more time to continue to evolve and make even better antibodies [against variants] like Delta.”

That’s why boosting with another dose of the existing vaccines should prove effective in controlling SARS-CoV-2, even if the shots aren’t specifically targeted against the Delta variant. And that applies to not just the antibody response, but to another type of immune response generated by a different group of immune cells known as T cells, which tends to be a little more durable. Antibodies are shorter lived because they target only outer parts of the virus, but T cell responses can target any proteins made by a virus, even after it infects a healthy human cell. That means T cells focus on parts of the virus that don’t mutate and change as easily to evade immune cells. The fact that people who are vaccinated but still get infected with SARS-CoV-2 yet don’t tend to get as sick or need hospitalization, and rarely die from COVID-19, is likely thanks to this T cell response.

Ideally, future vaccines would focus on boosting this T cell response against SARS-CoV-2 in an effort to trigger the longest-lasting immunity possible. Yang, who specializes in studying T cell-based immunity, says his group and others have already identified an attractive viral protein to target to accomplish this. Adding the genetic information for this protein into the genetically-based mRNA vaccines from Pfizer-BioNTech and Moderna could be “easily done,” he says.

T cells may end up being more important later in the disease’s course, in protecting against severe illness and providing longer term protection against COVID-19. Therefore, finding ways to strengthen that response remains an important target for COVID-19 researchers. “No doubt T cells will play a role in very likely not preventing initial infection but in the progression of disease by eliminating or blocking against infected cells,” said Fauci. “We will continue to study the T cell response.”

In the meantime, there’s reason to be confident that boosting people’s immune response with another dose of the existing vaccines would significantly improve their protection. But public health officials warned that variants like Delta are thriving where the virus can continue to reproduce, and at the moment, that’s in unvaccinated individuals, both in the U.S. and worldwide (only about 51% of Americans have been fully vaccinated so far, per TIME’s tracker). Vaccinating more people for the first time, as well as boosting those who are already immunized, are not mutually exclusive goals, and both need to be accomplished simultaneously in order to build an adequate wall of immunity that will finally slow COVID-19 down. 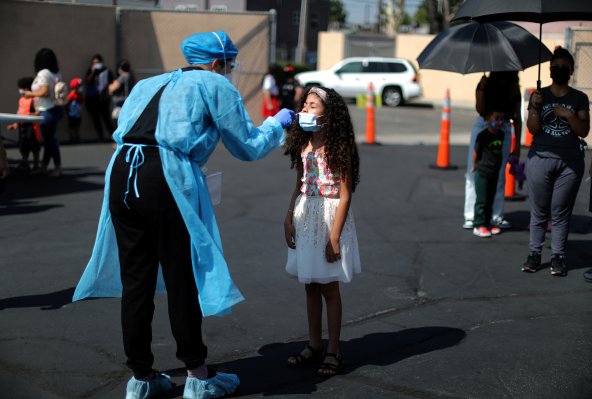 How to Protect Kids From COVID-19
Next Up: Editor's Pick