How One Nonprofit Is Attempting to Help LGBTQ Refugees Fleeing Afghanistan

Hundreds of people gather near a U.S. Air Force C-17 transport plane at a perimeter at the international airport in Kabul on Monday, Aug. 16.
Shekib Rahmani—AP
By Madeleine Carlisle

Thousands of people have attempted to flee Afghanistan this week as Taliban forces gained control of the country, culminating in the capital city of Kabul on Aug. 15. At least 400,000 Afghans have been forcibly displaced this year—250,000 since late May alone, according to the United Nations. A refugee crisis seems almost certain, and the fate of vulnerable groups including women leaders, persecuted religious minorities and LGBTQ people remains unclear under the new regime. On Aug. 13 Canada pledged to resettle 20,000 vulnerable Afghans who might be targeted by the Taliban. The U.S. also announced on Aug. 17 that it will allocate $500 million to allow for an increase in Afghan refugees, but did not specify exact numbers.

As in many conflicts, LGBTQ people in Afghanistan are uniquely vulnerable. Same sex intimacy was punishable by imprisonment or even death under Afghanistan’s prior government, and advocates worry LGBTQ people face an even greater threat of violence under the Taliban, pointing to the harsh interpretation of Shari‘a law that the group governed with while in power from 1996 to 2001. While the modern day Taliban has framed itself as more moderate, many human rights groups remain concerned. Just last month, a Taliban judge told the German tabloid Bild that gay men would be executed by being crushed to death.

Rainbow Railroad, a global nonprofit that aims to help LGBTQ people facing persecution, is preparing to help LGBTQ Afghans attempting to escape. Founded in 2006 in Canada, the organization works to help LGBTQ people flee countries where they face imminent danger because of their sexual orientation or gender identity. The group responds to over 3,000 requests each year, and manages to help roughly 200 people move across borders annually.

Read more: Afghans Who Fled the First Taliban Regime Found Precarious Sanctuary in Pakistan. New Refugees May Get an Even Colder Welcome

Rainbow Railroad has already received 50 requests for help from people in Afghanistan this year and is anticipating an uptick in the near future. TIME spoke with Kimahli Powell, the executive director of Rainbow Railroad, about the current crisis in Afghanistan, the nonprofit’s work in the region and what people at home can do to help.

TIME: Is Rainbow Railroad working to help anyone currently trying to leave Afghanistan?

Kimahli Powell: LGBTQ organizing is really limited in Afghanistan for multiple reasons, including Afghanistan being in a perpetual state of war and the criminalizing of consensual same sex conduct. There’s limited human rights defenders to go to and there are limited organizations that provide support. That’s the context in which Rainbow Railroad has been operating in the region. Key partnerships are huge for us in order to identify people who are at risk, and finding Afghans who are willing to even risk being on the Internet to disclose themselves as members of the LGBTQ community is really hard. I can’t disclose to you kind of the human rights defenders and the loose collectives of people we work with within the country because their lives will be at risk, especially within this context.

Despite this, we consistently receive requests for help from Afghanistan, and have received at least 50 this year alone. We anticipate there will be many more in the coming weeks and months. The Canadian government’s statement [that it will accept vulnerable refugees including LGBTQ people] is really crucial because it provides us an opportunity to try to form additional partnerships with human rights defenders to identify people who are LGBTQ at risk, because they will be extremely vulnerable during this period of time.

Read more: Europe Sees a Migration Crisis in the Making in Afghanistan. Have the Lessons of the 2015 Surge Been Learned?

How do you receive requests for help?

There’s two ways people reach out to us: Direct intervention on our website or through partner referrals. The requests we’ve received [from Afghanistan] have mostly come from individuals. I think what we’re going to see now, what we’re already seeing now, is a bit of a mass exodus. And so in the wake of things moving very quickly, I think we’re going to see LGBTQ persons be potential targets, which means more outreach to us. We are currently relying on our deep international network and our contacts within the country to try to reach more people.

How are you preparing to deal with a potential spike in requests?

The Canadian government has signaled LGBTQ persons as a vulnerable population. The next step for us is to understand the process by which the Canadian government is looking at resettling these individuals, offering our support and services to help identify individuals, and really ramping up our network and our processes by which we can safely identify individuals to refer. The situation is very fluid. When I say that we anticipate a spike in requests, what I mean is that in the coming days and weeks I think we’re gonna find individuals trying to reach out in any way they can, and us kind of searching for solutions at a moment’s notice.

We use all tools at our disposal to help relocate an individual who comes to us for help, including working with governments. Many times we do it on our own and navigate any way possible where we can guarantee the right to asylum. And in some instances, especially when there’s a crisis, it means working with a government to create a mechanism for multiple people to access a specific pathway. We have to do the real work of triaging these cases. Sometimes it can happen extremely quickly; sometimes it takes months.

What is the situation currently like for LGBTQ people in Afghanistan?

At this moment, it’s unclear as the Taliban takes over. But currently the law criminalizes consensual same sex conduct. And that has created a culture of harassment and violence by the police, as well as a culture of discrimination. People don’t have access to health services. They lose their jobs. Organizations or human rights defenders who try to promote human rights are driven underground because they can’t legally register with the government. [LGBTQ people] can’t report if they’re facing discrimination, assault, rape, or arrest. It means that they can’t even have access to tools that will allow them to connect with other members of the LGBTQ community like social media or social apps. And so even before the Taliban seized power, LGBTQ faced this type of discrimination. Given trends around the Middle East, [in] North Africa… we can anticipate that homophobia, transphobia, will just deepen under this regime.

Many human rights defenders who have to work underground in countries like Afghanistan generally have to relocate often and have to change phones regularly. Keeping track of individuals is really hard. And so I think that one of the biggest challenges human rights defenders will be facing in Afghanistan right now is finding safe spaces to be able to organize to reach out to other people. The key challenge is access to communication.

How can communities better support LGBTQ refugees as they resettle? 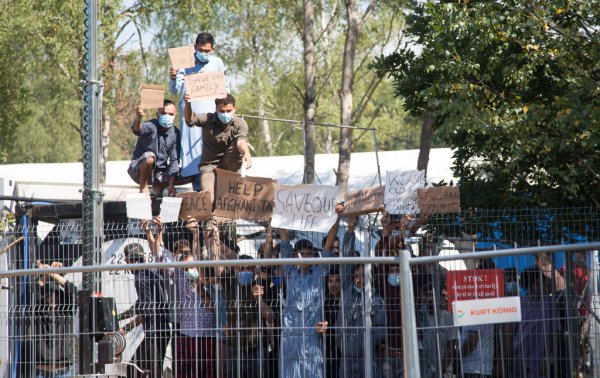 Europe Sees a Migration Crisis in the Making in Afghanistan. Have the Lessons of the 2015 Surge Been Learned?
Next Up: Editor's Pick