Americans and Afghans Brace for the Siege of Kabul

Kabul police secure areas in the central part of the city on Aug. 13, 2021.
Paula Bronstein—Getty Images
By Kimberly Dozier and W.J. Hennigan

As Taliban militants wrest control of Afghanistan by seizing one major city after another, Afghan leaders are scrambling to develop a strategy to defend the capital from the militants, while U.S. officials are taking steps to evacuate the sprawling U.S. Embassy in the center of the city, should Kabul fall.

Just as the U.S. deadline to withdraw from the country approaches on Aug. 31, Afghan forces have collapsed on nearly all fronts in the face of an eight-day blitz mounted by Taliban attacking cities in the north, east and south. The insurgents have captured more than a dozen provincial capitals, resulting in more than two-thirds of the country falling into their hands.

In a rare call on Thursday, Afghan President Ashraf Ghani sought guarantees from U.S. Secretary of State Antony Blinken and Defense Secretary Lloyd Austin that American warplanes would provide air strikes against the insurgents to protect Kabul, current and former Afghan officials tell TIME. The same day, the Pentagon announced plans to send about 3,000 U.S. troops back into the city to help evacuate the American embassy and Afghan civilians who helped with the U.S.-led war effort.

The Biden Administration has thus far only committed to a limited air campaign supporting Afghan forces battling the insurgency. But U.S. officials say there will be U.S. air cover in support of the thousands of newly announced American troops heading to Kabul to complete U.S. military withdrawal.

A police outpost, that was destroyed by the Taliban, in Kandahar, Afghanistan on Aug. 4, 2021.
Jim Huylebroek—The New York Times/Reux

“If these forces are attacked, and threatened, we have the ability, the right of self defense, and we will respond in a forceful and appropriate way,” Pentagon spokesman John Kirby told reporters Friday. Administration officials refused to comment directly on Ghani’s request, nor would Ghani’s office respond to requests for comment.

The rapidly deteriorating security situation has led the U.S. government and many outside observers to wonder when—not if—the Taliban will topple Kabul. Over the past month, the group has methodically encircled the capital and cut off critical supply routes in and out of the city. U.S. intelligence assessments initially estimated that Afghan security forces could stave off Taliban offensives against major population centers, like Kabul, for a year or possibly more. The latest intelligence reports say the nation’s capital may be vulnerable within 30 days, or less, a current U.S. official says.

The de-facto U.S. air support over the capital will be ongoing at least until Aug. 31. Providing air cover, however, has become increasingly challenging in recent weeks. The drones, bombers and fighter jets previously based inside Afghanistan are gone—pulled out as part of the U.S. military withdrawal. The planes now launch from regional bases and often take several hours to reach their targets.

For his part, Afghan vice president Amrullah Saleh told TIME that the “Americans can speak for themselves,” about whether the U.S. pledged to provide air support to prevent the fall of Kabul. “I am here. Will be here. And will never agree to a dictatorship. Never,” Saleh said.

The Biden Administration is sensitive to the appearance of the U.S. running for the exits, considering President Joe Biden himself told the American people that the Afghan withdrawal would in no way resemble the hurried 1975 evacuation of the embassy in Saigon, which marked the unseemly end of American-involvement in Vietnam War’s end.

State Department spokesman Ned Price said the U.S. embassy in Kabul would remain open for now but would not foreclose the prospect of whether that could soon change. Diplomatic staff who could remotely perform their duties will be relocated. “We expect to draw down to a core diplomatic presence in Afghanistan in the coming weeks,” he said. “This is not a full evacuation.”

A former U.S. diplomat said the announcement has created an uproar within the State Department, where top officials are both unsure of whether to fully evacuate the huge embassy complex and fearful of telling Biden that’s what should happen. “Everybody who could speak with authority is afraid to touch the issue,” one former senior U.S. official said. “They don’t want to make any decisions.”

Displaced Afghans from the northern provinces are evacuated from a makeshift IDP camp to various mosques and schools in Kabul, Afghanistan on Aug. 12, 2021.
Paula Bronstein—Getty Images

‘The Taliban has played U.S. peace negotiators like a fiddle.’

Since Thursday night, the key cities of Herat and Kandahar have fallen to advancing Taliban forces, as well as four more provinces: Logar; Helmand; Ghor; and Bagdis. One former Taliban official said the group has strategically seized many of the border crossings where fuel is imported into Afghanistan in preparation toward starving the capital Kabul, and the Afghan army trying to protect it.

Rumors spread in Iranian and then Afghan news outlets that Blinken and Austin had asked Ghani to resign in the Thursday phone call, leading Afghan officials to message each other in a panic late into Thursday night to see if it was true, and threatening Afghan troops’ morale as they face the real-time choice of capitulating to the Taliban, or keeping up the fight. A State Department spokesperson told TIME that the U.S. did not ask Ghani “to resign and rumors indicating we have done so are completely false. Decisions about who leads the country are for Afghans to make.”

Ghani’s office did not respond. A senior Afghan official told TIME the report was not true early on Saturday, Kabul time, but multiple other Afghan officials say they are still hearing Ghani might step down.

The hundreds, if not thousands, of Afghan troops who have surrendered through Taliban negotiation have largely been treated respectfully, while those who have fought their advance have suffered summary executions or simply disappeared, current and former Afghan officials and a former Taliban official say. That’s robbed them of the will to keep up the fight, as has scaling back of U.S. air support since the spring.

An aide to Logar Province Governor Abdul Rahimi Qayumi told TIME the governor and his 30-soldier personal protection detail “fought until the last bullet… for seven hours, but did not receive the backup, including air support, he requested.” The aide said the governor was “taken captive” by the Taliban, and staffers like him are now in hiding.

Against the backdrop of this fast-escalating violence, the State Department insists that peace talks in Doha, Qatar, are still viable. Afghan and Taliban negotiators in Doha were still in communication on Friday, but there were no formal meetings planned, and each side says the other’s intransigence and unwillingness to compromise has frozen the talks.

The former Afghan Ambassador to Washington, Roya Rahmani, said the U.S. has to put more pressure on “both sides” including the threat of military force against the Taliban if necessary, to come to a compromise deal, to avoid “the tragedy of a century.”

A deserted view of the consular section at the U.S. embassy in Kabul, Afghanistan on July 30, 2021.
Sajjad Hussain—AFP/Getty Images

A meeting of envoys from multiple regional countries including the U.S. and E.U. produced little but a general statement, provided to TIME by an Afghan official, saying the peace talks must be “accelerated” and condemning the “reports from across Afghanistan” of “large numbers of civilian casualties and extra-judicial killings, widespread and credible allegations of human rights violations,” as well as condemning ground and air attacks on provincial capitals and cities.

Barakatullah Rahmati, deputy Ambassador of Afghanistan in Doha, said the talks have amounted to theater, with the Taliban “trying to impose a surrender deal on the Afghan government,” and suggesting via intermediaries, including the U.S. government, that they take the lion’s share of the top government positions and the security and defense ministries, as well as the ministry of finance. Rahmati says there are “no hopes for talks to yield any results, especially in the light of many, many Taliban advances in these past days.”

The Ghani Administration in Kabul has decried the Taliban’s rapid advance as a betrayal of the peace talks. Suhail Shaheen, the Taliban spokesman in Doha, tells TIME the group only launched the most recent offensive in answer to Ghani’s Aug. 2 announcement of a six-month campaign against the militants.

Shaheen said it’s the Afghan government and other factions who have been unwilling to compromise, refusing to brook discussion of changing the structure of government from a Republic to what Shaheen calls a “more Islamic” system, and refusing to release Afghan prisoners. “They do not show flexibility in their approach,” he said. “We need to expedite this process, because the progress is so slow.”

Current and former American, European and Afghan officials say with the pullout of most U.S. troops, there is no reason for the Taliban to give up the power it has easily seized by force. Much of their criticism is focused on U.S. peace envoy Zalmay Khalilzad, who they accuse of being snowed by the Taliban.

“The Taliban has played U.S. peace negotiators like a fiddle,” said former senior Pentagon official David Sedney, and former president at American University of Afghanistan, a frequent target of militant attacks. “They used them to rob the Afghans of the willingness to fight, when they never had any intent to negotiate.”

As he prepared to depart Doha, Dr. Abdullah Abdullah, Chairman of the country’s ambitiously named High Council for National Reconciliation, called on Thursday for an extraordinary UN Security Council meeting to discuss the devolving security situation.

In Afghan political circles the blame game for the imminent loss of the city, and country, has started in earnest, with current Afghan officials pointing to Ghani and his narrow team at the top, which current and former officials say alienated the public with poor and corrupt management, including government services meted out only through bribes, and vicious palace infighting that has wallpapered Afghan media of late.

“Ghani monopolized everything and brought in such a distance between the people and the government that the people see no big difference between his regime and that of the Talibs,” one current Afghan official says, his anger leavened by fear of the Taliban army approaching the capital. “Both are absolute tyrannies.”

The UN refugee agency says a total of 400,000 civilians have fled their homes since the beginning of the year, with nearly a quarter-million displaced since May, most women and children. Agency officials said Friday that Afghanistan is on course to witness its highest ever number of civilian casualties in a single year, since records began. 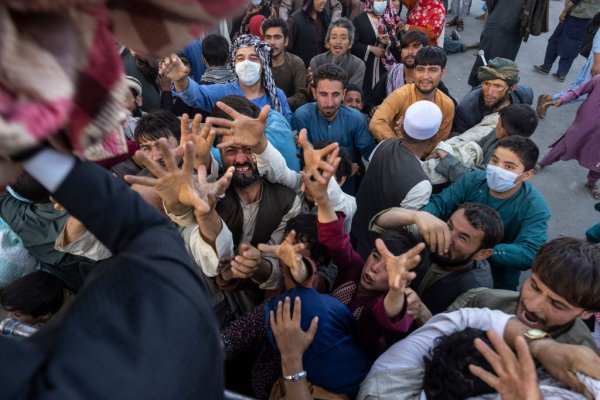 Frustration Builds Between U.S. and Afghan Leaders over Taliban's Advance
Next Up: Editor's Pick