By Brian Bennett and W.J. Hennigan

The fast-moving Taliban advances in Afghanistan have fed discontent between the Afghan government and the Biden White House, as the longtime allies blame each other for the tactical defeats that have allowed the militants to seize control of eight of Afghanistan’s 34 provincial capitals.

Since April, when President Joe Biden announced the U.S. would withdraw troops from Afghanistan by the end of August, U.S. commanders have made recommendations to Afghan leaders on how to position Afghan troops, consolidate defenses, utilize the Afghan Air Force and prepare for Taliban advances, but say multiple senior Biden Administration officials, only some of that advice has been followed. Earlier this month, Afghanistan’s President Ashraf Ghani blamed the increase in attacks on Washington’s abrupt decision to withdraw.

Frustrations that Administration officials have voiced behind closed doors for weeks are now spilling out into the open. President Joe Biden himself launched a critique of Afghanistan’s leadership on Tuesday and defended his decision to pull out the remaining U.S. troops in the country. Standing in the East Room of the White House, Biden said the U.S. exit would continue as planned, and that he doesn’t regret pulling U.S. forces from the country. “Look, we spent over a trillion dollars over 20 years. We trained and equipped with modern equipment over 300,000 Afghan forces. And Afghan leaders have to come together,” Biden told reporters after touting the Senate passage of a massive bipartisan infrastructure bill.

The U.S. will continue to provide “close air support,” keep Afghanistan’s Air Force flying, pay Afghan military salaries and resupply Afghan forces with food and equipment, Biden said. Then he leaned forward and said in a stage-whisper: “But they’ve got to want to fight. They outnumber the Taliban.”

The President dispatched America’s top Afghanistan envoy, Zalmay Khalilzad, to Doha, Qatar, this week for negotiations with the insurgent group. He hopes to restart peace talks between the Taliban and Afghan officials, which have stalled amid the stepped-up violence. The UN reports that in four cities, alone—Lashkar Gah, Kandahar, Herat and Kunduz—at least 183 civilians have been killed and 1,181 injured, including many children, over the past month. Across the country, more than five million people are internally displaced due to the fighting and almost half of population is in need of emergency relief assistance, the UN says.

Since Biden made his April announcement, Afghan forces have come under siege by Taliban fighters, particularly after U.S. and NATO forces began the massive logistical challenge of pulling out troops, aircraft and heavy weapons from strategic locations they occupied for 20 years. The Afghan government made the strategic decision to largely surrender the countryside to the militants’ advance and concentrate forces and resources to defending strategic economic and political hubs like the capital Kabul, Mazar-e-Sharif in the north, Kandahar in the south and Herat in the west. To defend these population centers, Afghan military leaders have relied on deploying their highly trained special forces units, which, as a result, has left the commandos fatigued.

So far, Afghan security forces have held off Taliban offensives in Kandahar and Lashkar Gah. But elsewhere the Taliban has captured and walked untouched into provincial capitals. On Tuesday, the Taliban overran both the southwest city of Farah and Puli Khumri in the north, which became the seventh and eighth provincial capitals seized in just five days. The insurgents, which have been seen with seized U.S. military equipment, now control more than half of Afghanistan’s 421 districts and district centers—more territory in the country than at any time since the U.S. toppled the group from power in 2001 following the September 11 attacks.

The Biden Administration insists it is now up to the Afghan government to win or lose this decades-long war. The U.S. military is, however, continuing to launch airstrikes in support of Afghan ground forces confronting the advancing Taliban. But the U.S. warplanes, which have all have been pulled out of Afghanistan as part of the withdrawal, take several hours reach targets from other regional bases.The Pentagon refuses to say how many bombs have been dropped or what targets were hit in support of the Afghans over the past several weeks, but the support is ongoing—at least until Aug. 31 pullout. After that, the White House must decide whether it will continue providing air cover for government forces or limit its airstrikes to strictly targeting terror groups like ISIS and al-Qaeda.

Pentagon spokesman John Kirby cautioned Tuesday against seeing continuing U.S. air support as “a panacea” for the deteriorating security situation in Afghanistan. The Afghan government, he said, has what it needs to beat back the Taliban advance. He pointed out that Afghanistan’s 300,000 troops and police, which the U.S. has spent $84 billion to train and equip, vastly outnumbers the estimated 75,000 Taliban fighters. “It’s really going to come down to the leadership and the will to use those capabilities,” he said.

Biden, for his part, publicly praised Afghanistan’s newly installed defense minister, Bismillah Khan, describing him as “a serious fighter”—even as members of his national security team were critical of Afghan leaders’ decisions on the battlefield.

It surprised many longtime Afghanistan watchers when Biden announced plans to pull out of Afghanistan—without preconditions—and leave the allied government in Kabul to fend for itself militarily. Biden has maintained he is simply following through with the withdrawal deal that was negotiated between the Trump Administration and the Taliban, while also stressing the need to end U.S. involvement in its longest war in history.

GOP lawmakers have largely remained quiet on Afghanistan’s spiraling security situation, but the recent string of Taliban victories has triggered some to speak up. Rep. Mike Rogers from Alabama, now the top Republican on the House Armed Services Committee, laid the problem at Biden’s feet on Tuesday. “President Biden cannot hide from this catastrophe,” he said in a statement. “It’s happening on his watch because of his actions. He must change course or be held accountable for his decision.”

Bradley Bowman, a former Army officer who served in Afghanistan, says that the open critiques of the Afghan leadership by American officials are “distasteful and unhelpful.” Such messages should be delivered privately, Bowman says. “To the degree that they’re being delivered publicly, I wonder if there’s a little bit of trying to cover one’s backside going on here.”

The U.S. military now says it has completed 95% of its withdrawal, meaning that nearly all 2,500 American troops have departed the country. The only exception are security units based at the U.S. embassy and airport in Kabul. 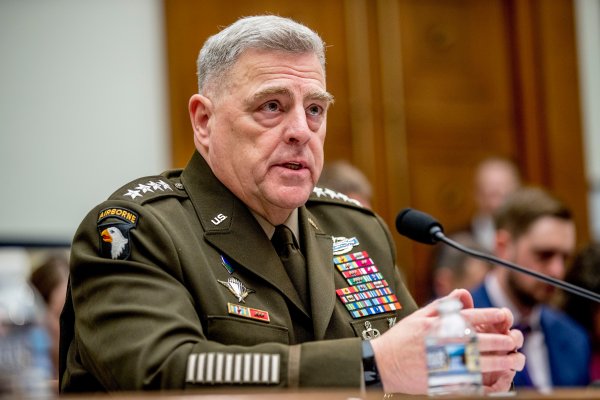