I’m a Health Writer Who Covers the Olympics. Here’s What I Thought of the Tokyo Games Bubble

Over the past 18 months, I’ve written about the devastating impact of COVID-19 on hospitals, health care workers and families across the world. I’ve chronicled the efforts of drugmakers racing to formulate new treatments and vaccines to battle SARS-CoV-2. And I’ve tracked the ups and downs of public health policy that’s trying to keep up with a virus that makes it hard to develop clear rules on masking, social distancing and more.

When well-intentioned mitigation measures are pitted against a wily virus, who wins? What would happen when tens of thousands of journalists, athletes and their support staff converge on a densely populated city like Tokyo, to put on something like the Olympics, which is about everything that pandemic policies are not? The Games are about bringing people together, literally and figuratively; keeping a fast-moving virus at bay is all about the opposite.

It was clear that infections would happen at the Olympics; it would just be a matter of picking them up as quickly as possible and isolating any positive cases before they spread to too many others. Japanese health authorities certainly instituted strict virus control measures, starting with the working assumption that every person arriving in Japan for the Olympics could be a potential virus carrier. That’s the first of many inconsistencies of these pandemic Olympics. Given that anywhere from 80% to 90% of the arriving journalists from outside of the country were vaccinated, and at the time, about a quarter or so of the Japanese population was, wouldn’t the risk have really been reversed? Wouldn’t it be more likely that mingling with people in Tokyo—where new infections were creeping up before the Olympics thanks to the Delta variant and reached a record high during the Games—would prove a greater risk to Olympic athletes and journalists than we would to the citizens of Tokyo?

Everyone that was part of the Olympic community had to get tested regularly—daily for athletes and their support staff, and every four days for media. In addition, Olympic organizers created loose bubbles of containment meant to keep Olympic travelers as removed from the Japanese populace as possible.

All of this looked great on paper in the various playbooks issued to those of us in Tokyo. But putting that plan into action proved trickier, and inconsistencies in policies and the lack of flexibility to adjust when they didn’t seem to work were, to say the least, baffling. While the bubble didn’t quite burst, it was leaky at best. Here’s why.

It took my colleague Sean Gregory and me seven hours to leave the airport once we arrived (that’s not a typo, it really took seven hours). The bulk of that time was spent waiting for test results from the third COVID-19 test we had taken in four days—two before we left and then another at the airport. Having covered the various tests that have been developed and approved now by the U.S. Food and Drug Administration and by the World Health Organization, I know there are saliva-based tests that take an hour or so to produce results. So what took our spit test so long? No explanation; some journalists arriving on different flights received their results in an hour, while still others were also kept at the airport for seven hours, waiting. If the same lab or labs were used, and the same type of test performed, why the vast difference in turnaround time? Baffling. After a 13-hour flight, it would have been nice to know.

Athletes, coaches and journalists from different countries are seen during their control process to receive their accreditation cards upon their COVID-19 test results following their arrival to Haneda International Airport after their connected flights from Istanbul International Airport for the Tokyo Olympic Games, in Tokyo, Japan on July 18, 2021.
Elif Ozturk Ozgoncu—Anadolu Agency via Getty Images

Most of those seven hours waiting were spent in a lounge with no social distancing (and no food; we could only drink water, in case we had to provide another saliva sample if the results were inconclusive), and the rest of the time was spent in one line after another—again with no social distancing. Yes, we were masked, and so were all the volunteers, but still. We were asked to provide the same paper documents at least eight times—which meant at least eight perfectly polite and well-intentioned different people touched the same piece of paper and handed it back to us. This, despite the fact that we were also required to download an app that contained all of the same information on the paper, except in digital form. Which would have been a safer way to process thousands of people during an infectious disease outbreak—at least in my opinion. Again, baffling.

The playbooks outlining all of the procedures for keeping COVID-19 under control focused heavily on regular saliva-based testing. However, given the sheer number of people being tested, and the frequency of testing, it was unmonitored. At least one colleague misunderstood the procedure—you’re supposed to register each sample and give each sample a unique barcode number from a set of stickers you’re provided; this journalist thought registering the first time would automatically register subsequent samples, He likely wasn’t the only one.

Plus, so-called COVID-19 Liaison Officers assigned to each media outlet were supposed to observe all members of their group spit into the tubes provided to verify the validity of the samples. But with different members in different hotels and with different schedules, how is that possible or realistic? I’m willing to bet most people spit into their tubes in the privacy of their own bathrooms. I won’t even speculate about people who might have, shall we say, “manipulated” their samples for the sake of convenience.

With all the warnings about COVID-19 restrictions and other pandemic-related protocols and procedures, I expected our hotel to be pretty sparsely occupied, and only by foreign journalists at that. Everyone entering Japan is required to follow a 14-day quarantine, which means no riding public transportation, no walking around Tokyo streets, and no mingling with the Japanese population in restaurants, bars or other establishments. For journalists, that meant we could only leave our hotels to go to Olympic venues, on Olympic buses, or to the nearby 7-Eleven for prepackaged meals and ramen (I ate so, so much ramen). Because, of course, we were quarantined, but our hotels only served breakfast and did not provide lunch or dinner.

So imagine my surprise when I saw, throughout my entire stay, non-Olympic guests at the hotel—they in fact out-numbered the Olympic ones. I saw them at breakfast—we shared the same air space, indoors, and stood behind each other in line for juice and coffee. If Olympic officials were so intent on keeping foreign visitors in a bubble to prevent them from importing the virus and spreading it in the country, why allow them to stay together with Japanese citizens and risk exposing them? Truly, truly baffling.

Read more: The 9 Most Inspiring and Surprising Things I Saw At The Tokyo Olympics

The transport system is the bane of every Olympics—drivers from other cities who don’t know the host city’s streets, schedules that have nothing to do with the timing of events; pick up and drop off points that add up to an hour to the transit time. How would social distancing affect this already inefficient system?

Not at all, apparently. Before the Games even officially began, buses carted thousands of journalists from the press center to Olympic Stadium for Opening Ceremony despite signs in some buses that the maximum number of passengers was 30, to ensure that everyone could sit in their own row and practice social distancing. Once the Ceremony was over, the buses returning media to the press center were equally stuffed, as was the line for getting on these buses, which resembled the mad rush before the doors open for a Black Friday sale. I emailed Press Operations about the situation, and the International Olympic Committee had this to say: “We are aware of the concerns around the media transport and are speaking to the Tokyo 2020 Organising Committee in order to help them to resolve the situation.”

Members of the media on a packed media bus in Tokyo ahead of the Tokyo 2020 Olympic Games in Japan. Picture date: Friday July 23, 2021.
Danny Lawson—PA Images via Getty Images

Ah, the mixed zone, that mad crush of journalists waiting in what amounts to an enclosed pen, usually in the bowels of an arena, for athletes to swing by and grace them with a quote or two. Media were warned that mixed zone access in Tokyo would be limited—journalists had to apply for access, which would be granted by a random drawing. Spots were designated by tape and stickers on the floor admonishing us to “Please keep your distance.”

If only people did. Habits die hard, and at the pool and gymnastics venues, journalists clumped together as they always had to ask questions and snag quotes when athletes stopped by. And it only got worse as the Games wore on. If Tokyo organizing officials were worried about foreign travelers importing COVID-19, they were missing a potential hot spot of transmission right under their noses.

A pandemic doesn’t stop the need to validate credentials and to be on the alert for fraudsters, and I’m all for remaining vigilant on that front. Problem is, it’s not easy to verify people’s identifies when everyone is wearing a mask. So of course you ask them to take the masks off. In Tokyo, the verification at every venue involves scanning the credential and sticking your face close to a camera embedded in a stand-up kiosk. The camera, however, doesn’t get triggered unless your face is really close to the camera. This means if you’re entering a popular event and queuing up, your face—without a mask—is in the same place that someone else’s face—also without a mask—has been just seconds before. This wouldn’t bother me so much if it weren’t also the case that medalists have to put their own medals around their necks to avoid close contact, however brief, with presenters. If you’re going to ask people to avoid close contact, then ask them to avoid close contact in every situation possible? I found myself aiming for the kiosks that hadn’t scanned anyone in the past few seconds.

All of this isn’t meant to say that the COVID-19 mitigation measures didn’t work; by and large, they did—according to Tokyo organizers, through Aug. 4, more than 570,000 tests were run among Olympic-related people and 124 were confirmed positive for a positivity rate of 0.02%. And I empathize with the herculean task organizers had in pulling off these Games. But some more consistency in applying the public health principles that are effective in controlling the spread of COVID-19—like avoiding crowded places, closed spaces and close contact—might have gone a long way toward even greater compliance and an even lower positivity rate.

Hopefully, that will be a lesson learned the next time this happens again—in six months in Beijing, for the 2022 Winter Olympics. 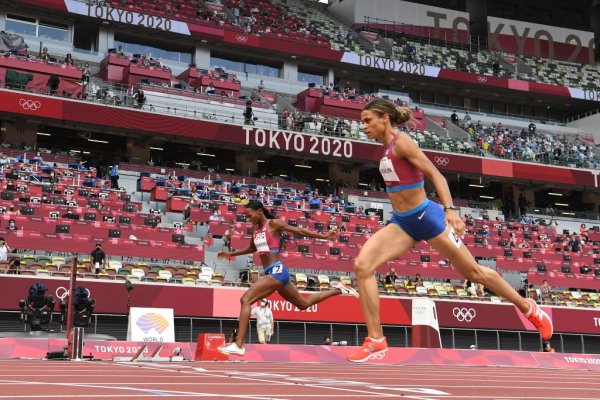 The 9 Best Moments of the Tokyo Olympics
Next Up: Editor's Pick