The Olympics are in the business of creating indelible moments, and the past 11 days in Tokyo have been no exception. Suni Lee stepped into the void left by Simone Biles, taking home a surprise gold medal in the women’s gymnastics all-around, before Biles’ triumphant return for the balance beam final on Tuesday. We watched remarkable performances by a new generation of USA swimming superstars. There was the moving decision two high jumpers, Mutaz Barshim of Qatar and Gianmarco Tamberi of Italy, made to share the gold instead of battling it out in a jump-off. So why, when I think of astonishing images from the Tokyo Olympics, is the first one that comes to mind a Geico ad?

Allow me to set the scene. It’s Monday afternoon, July 26, in Tokyo—but Sunday night, the 25th, in New York, where I’m watching the games. After a series of intense qualifying heats (some but, frustratingly, not all of which aired on cable), the first-ever women’s street skateboarding Olympic final is airing live on NBC. In just a few minutes, the event will crown its awe-inspiring champion, 13-year-old Momiji Nishiya of Japan. But before that, while the top eight competitors are executing their last tricks, it’s time for a commercial break. And so, as Alexis Sablone, the only American skater who qualified, makes her final attempt, the only American broadcast network covering the Olympics squishes her into split-screen and mutes the commentators. What we hear instead, blasting out of the larger of the two frames, is that ad for Geico.

To be fair, Sablone was so far behind Nishiya and the other medalists that even a flawless performance wouldn’t have done much to get her on the podium. Still, the disrespect toward an American Olympian rankled me (and no small number of other viewers), especially at the end of what had already been an extremely confusing first weekend of coverage from NBC. From Twitter and Reddit to Slack chats and real-life living rooms, everyone seemed to be expressing frustration with what we were seeing—or not seeing—out of Tokyo. Those gripes have, if anything, ramped up over the past week. Now, complaining about TV coverage of the Olympics is such a time-honored tradition that it might as well be a medal sport unto itself. But this year’s grumbling has been some of the loudest in recent memory. It’s easy to blame NBC—whose abysmal early ratings had plunged even lower by the end of last week—for this disaster. Is that fair, though? Could these pandemic games ever have been anything but anticlimactic?

In the broadcaster’s defense, they’ve been dealing with something approaching a worst-case scenario. Tokyo is in the midst of a Delta-driven COVID surge that has resulted in outbreaks at Olympic Village and necessitated empty, eerily silent stadiums; some residents have protested outside the Olympics venues. An opening ceremony that had already been diminished by the virus’ ongoing ravages was also plagued by last-minute scandals. It seems fair to say that the average Earthling is not exactly in a celebratory mood.

Japan is also 13 hours ahead of Eastern Time, meaning that a primetime event in Tokyo could start around sunrise on the East Coast and in the wee hours of the morning on the West Coast. Although various combinations of NBC, NBCUniversal-owned cable channels, the NBC Sports app and Peacock (about which, more later) do air those competitions live, they take place at such inconvenient hours, when most Americans are either sleeping or working, that re-broadcasting big draws like gymnastics in the evenings is a must. The result is a daily NBC primetime telecast that mixes these pre-recorded events and highlight reels from the day’s less-popular sports with unpredictable live coverage.

That much is probably inevitable. But it’s hard not to fault NBC for some baffling execution. On Saturday, cameras hovered for several minutes on the U.S. men’s swim team standing around waiting to make their entrance from the locker room after some sort of delay, as the announcers dispensed inane factoids. At one point, between swimming events, the network switched over to a not-particularly-crucial moment in the live golf feed. For viewers at home, it was like being at the mercy of an incompetent channel surfer hoarding the remote from halfway around the globe.

Sunday evening’s equally chaotic telecast featured an admittedly challenging lineup—mostly live, brief track and field events, including a handful of sprints that took a while to set up but were over in under a minute. Which didn’t necessarily mean that NBC should’ve spent 10 minutes on either side of those races trailing star runners as they milled around preparing for their big moment. Particularly disorienting were track and field clips taped in the darkness of the previous night (Tokyo time) and interspersed with the live daytime footage. Hang on to your circadian rhythms, sports fans!

Of course, NBC primetime was hardly the only viewing option. CNBC, USA and a smattering of other cable channels offered more generous glimpses of a broader range of sports—although even they, annoyingly, often cut away from in-progress events, either directing viewers to other networks for continued coverage like some televisual Choose Your Own Adventure novel… or not. Then again, who could blame NBC for de-prioritizing its cable content? It’s getting harder every day to get people—especially young people—to watch linear television. (When was the last time some folks griping about all the ads in NBC’s coverage actually had to sit through an old-school commercial break? In fact, according to media reports, traditional TV viewing of this year’s Olympics is low enough that NBC is allegedly in discussions with advertisers to make good on unmet guarantees by offering free commercials.) The plan was always, and for good reason, to make the Tokyo Olympics a showcase for NBCUniversal’s tepidly received streaming service, Peacock.

By some metrics, the strategy has been a success. Peacock sign-ups soared in Q2, with new subscribers’ excitement for the Olympics presumably driving some of that growth—although, considering that the quarter ended more than three weeks before the games began, it’s hard to know how viewers actually feel about the product or whether they’re talking it up to their friends as the best way to watch. For my part, I kind of doubt that’s happening. Unless you’re willing to throw down for Peacock’s paid tier, or have some great desire to watch full half-hour episodes of the comedy talk show where Snoop Dogg and Kevin Hart make fun of dressage, there’s not much on Peacock that can’t also be found on NBC Sports’ clip-filled YouTube page. Meanwhile, if you do still subscribe to cable, the simplest and most comprehensive platform for full events is the NBC Sports app.

As Vulture’s Josef Adalian explains at edifying length, the discrepancies between NBC Sports and Peacock, as well as the redundancy of NBC’s multi-platform online Olympics coverage, speak to our transitional moment in the shift from broadcast and cable to streaming:

In other words, some of viewers’ greatest frustrations surrounding the Tokyo Olympics are rooted in the challenges of making a $7.75 billion Olympics coverage deal that NBC signed in 2014—about a century ago in streaming-wars time—as lucrative as possible for NBC Universal, cable companies and advertisers. Certainly, that goes a long way towards explaining why a Geico ad took precedence over an American skateboarder’s last act in Tokyo. NBC deserves any blowback it gets for disrespecting Sablone and for many other baffling individual choices. (See also: well-founded exasperation from Greg Braxton at the L.A. Times over seeing Naomi Osaka shunted to cable while NBC aired rugby. “The most famous female athlete in the world was being treated almost as a sideshow on a small stage,” Braxton writes, “when she should have been in the center ring.”)

Ultimately, though, the impediment to better Olympics coverage is a larger system that entrusts NBCU and other bottom-line-driven media megacorps to deliver the world’s most important news, cultural and, yes, sports events to a public that deserves to know about them. Never is the need for a powerful, well-funded public broadcaster on the level of the BBC in the U.S. more apparent than it is during the Olympics. This might sound like a utopian solution, and maybe it is at this late, confusing stage in the life of American TV. But the Olympics are, in theory if not in practice, a utopian tradition. Pandemic or no pandemic, time difference or no time difference, streaming wars or streaming detente—coverage of the games that prioritizes corporate profits over service to viewers is always going to fall short. 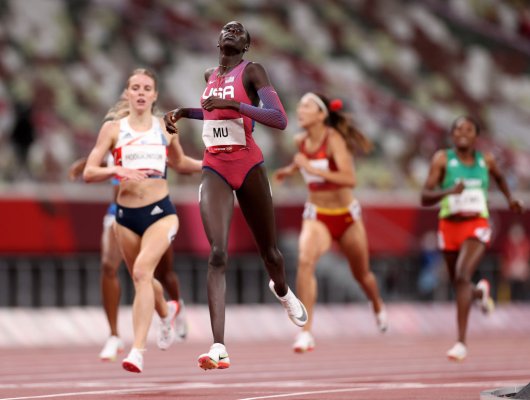 Athing Mu Wins Gold in 800 meters at Tokyo Olympics
Next Up: Editor's Pick