‘Our Opponents Are Getting Desperate.’ Human Rights Campaign President Alphonso David on the Ongoing Fight for LGBTQ Rights

Alphonso David has been busy. The civil rights attorney became the eighth leader of the Human Rights Campaign (HRC), the world’s largest LGBTQ civil rights organization, just six months before the COVID-19 pandemic struck the U.S. Over the past two years, he’s found himself mobilizing for a presidential election, pivoting to the constraints of remote work and responding to a global reckoning on race and racial justice. In 2021 alone, he’s faced a spree of anti-LGBTQ bills in state legislatures, and has led the powerful lobbying group in new directions to address attacks on trans rights.

Who knows what the next fews years might bring, but David is almost certain to remain busy. On Wednesday, HRC exclusively announced to TIME that David, the first person of color to serve as president in HRC’s 40 year history, has signed a contract—one of the longest offered by HRC and the HRC Foundation Joint Board of Directors to a president—to stay on in his role for five more years.

“I’m deeply honored to be in this position,” David tells TIME during a July 28 interview discussing his tenure, the current state of LGBTQ rights in the U.S. and the work left to be done. “My vision of the future is really intersectional… My mission is not about a title, not about a specific job or position. It is really making sure I have an opportunity to take a platform and advance the interests of marginalized communities and achieve equality for LGBTQ people.”

TIME: What do you envision for the future of HRC?

I want to make sure that people of color see the Human Rights Campaign and the LGBTQ movement as home for them. We LGBTQ people of color have been denied basic protections for so long, and in some instances within our own community. So coming into this job understanding that hurt, that pain, understanding how to utilize that to advance us forward has been one of the greatest gifts and opportunities that this role presents. I also want to make sure that we’re deepening our commitment as it relates to transgender and non-binary people. I want the organization to continue being a place that challenges us as a community, as well as inspires us. We have seen our opponents take the concept of equality and turn it into something that it’s not; ultimately, we need to get to a place where equality is not a political issue.

What are some of the lessons you’ve learned over the past two years that you want to carry forward?

What we’ve seen, in some instances, is people using history to define the present, as opposed to informing it. Our history is very important, because it tells us where we come from—and it gives us a pathway to the future. But it shouldn’t define our present. We are living in an ever-evolving community; we need to be mindful of those changes and appreciative of those changes—and listen to young people to understand how they see the world and what they bring to the table that can inform our future in a much more dynamic way.

In the past HRC has previously been criticized as overly white or male. During—and since—that catalyst for racial reckoning last summer, how has HRC worked to be more inclusive?

I did a number of things. I initiated a sign-on letter calling on LGBTQ organizations to center racial justice into their work; a letter, by the way, which was signed by more than 800 LGBTQ and civil rights organizations. I wanted to communicate to those organizations how important it was—for me as a Black man, for me as the leader of the Human Rights Campaign—to communicate to them what I thought they should do. And I did work within the organization to make sure that employees of color felt that their voices were being heard.

Going back to the point I made earlier, we have to appreciate and respect our history. But we cannot be defined by our history. As a Black man coming into run this organization, I felt and continue to feel strongly that I cannot be shackled by decisions made by others before me. What I can do is be informed by those decisions. The LGBTQ civil rights movement started in protest. Black and Brown transgender women were fighting for liberation, and they were fighting against police brutality. We’re also fighting against police brutality today…through the lens of race, but also through the lens of LGBTQ identity. And that’s how I’ve done this work, really re-centering the origins of the LGBTQ movement and the organization in activism and in racial justice.

HRC has recently expanded its legal activity, launching an impact litigation program and bringing legal challenges to anti-LGBTQ state laws. Why this new focus on litigation, when HRC has historically focused more on political lobbying?

The Human Rights Campaign started in 1980 as purely a political organization. It morphed a few years later into an organization that consisted of both political work and programmatic work. With respect to litigation, the organization has submitted more than 70 amicus briefs to the U.S. Supreme Court and other federal courts. We also sued the Trump Administration [over its] transgender military ban. As a lawyer, when I came into the organization, I wanted to ensure that we were utilizing all of the tools in our toolbox. And impact litigation is, I believe, a mission critical strategy, because it has the potential to change the landscape for massive amounts of people.

We want to make sure that LGBTQ people understand that they matter, and that their rights have to be respected. That’s why we file these lawsuits. Because if we don’t, we allow our opponents to use the law and manipulate the law to further erode the legal protections that we should have.

As your own organization reported, 2021 has been one of the worst years in recent history in terms of anti-LGBTQ laws, particularly in terms of laws targeting trans children and teens. Why do you think these laws are proliferating now?

Our opponents are getting desperate. That’s why. They understand that they have lost the battle for marriage equality. They have effectively lost the battle in banning LGBTQ people from serving as public school teachers. And they’re now shifting their focus to members of the trans community because they believe that they can mobilize their base.

It’s the fear of losing power driving their attacks. [It’s] the same reason why they’re introducing bills across the country to suppress votes, and suppress the right for marginalized communities to exercise their right to vote.

What do you think the impact of these anti-LGBTQ bills will be?

We now have three federal courts that have stayed, or stopped, these anti-LGBTQ bills from going into effect. As a lawyer, you always have to be suspect in predicting how courts will rule on certain cases. But I’m guided by the rule of law: These bills violate Title IX. They violate Equal Protection. They violate Due Process. This is about bigotry and discrimination. And we have a US Constitution that ensures that we should be treated equally under the law.

The bills are also raising public awareness. More than two thirds of voters oppose these bills. And more than 70% of voters support equality. Our opponents believe that they’re introducing these bills in order to mobilize their bases. But the opposite will happen.

Are there any policies or steps that you would like to see the Biden Administration make going forward?

We’re certainly quite pleased with the steps the Administration has already taken, from the executive order implementing the Supreme Court’s Bostock decision to repealing the ban on having transgender people serve in the U.S. military. But there’s a lot more work to do. President Biden recently issued an executive order on equity that asked federal agencies to really reassess how they’re engaging in data collection, so we’re looking for the federal Administration to continue along its work to start tracking LGBTQ people because if we’re not counted—it is as if we don’t exist.

We’re looking [for the administration] to ban the practice of conversion therapy as a fraudulent business practice. And we’re also looking for them to lift the blood ban.

The past year has been extremely difficult for people all over the world. What steps do you take to center wellness and decompress, especially given work that can be so all-consuming?

I work out every single day. I play tennis. I rock climb. I practice yoga. I meditate. It’s an opportunity for me to find a release and recenter myself through the chaos. I am also a huge film aficionado [and] I love books. I love poetry; James Baldwin is probably my favorite author. And so I’ve read when I can find the time—it’s all about taking a step back and appreciating someone else’s perspective and assigning values to it. That is the only way we can truly move forward to create a democracy that works for all of us.

This interview has been edited and condensed for clarity. 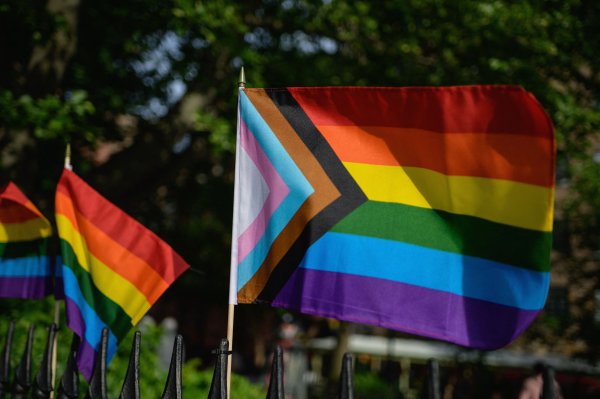 Addressing the Flaws in our Mental Healthcare System Could Save Young LGBTQ Lives
Next Up: Editor's Pick