Can Biden Finish What Obama Started And Close Down Guantanamo?

The American flag blows behind a barbed wire fence in the wind in Guantanamo Bay, Cuba on Oct. 16, 2018.
Maren Hennemuth—DPA/Getty Images
By W.J. Hennigan

Nineteen years after he was captured in Afghanistan, and five years after a review board ruled he posed no threat to the United States, Abdul Latif Nasser was finally released this month from the U.S. military prison complex at Guantanamo Bay, Cuba, and repatriated to his native Morocco. He became the first prisoner transferred from the notorious detention facility in more than three years.

The move became the first real sign that there’s an effort underway to close Guantanamo. Since President Joe Biden came into office, however, administration officials at the Pentagon, State Department and National Security Council have quietly been working on a strategy to shutter the facility, built after the al-Qaeda attacks of Sept. 11, 2001. Designed to detain individuals apprehended by the U.S. in its War on Terror, the prison has been become a costly and damaging quagmire for the U.S. government, once labeled by Amnesty International as the “gulag of our time.”

One of former President Barack Obama’s first orders in 2009 was to close the facility within a year; he failed. Now, twelve years later, his former Vice President is taking on the same arduous challenge that will require help from Congress and wholesale changes in the military commissions process.

After Nasser’s transfer, Guantanamo now houses just 39 inmates. Ten of them are already cleared for release, and 17 others are eligible for a periodic evaluation by a parole-like board about whether they, too, can be transferred. A dozen more high-value prisoners, including Khalid Shaikh Mohammed and other alleged plotters of the Sept. 11 attack, are set to remain at Guantanamo Bay until they are tried in military tribunals there. The Biden Administration wants to repatriate the detainees who have been cleared for release to foreign countries and work with Congress to lift current restrictions that block the remaining prisoners’ transfer to U.S. mainland facilities.

At the core of White House’s push to close Guantanamo is the desire to rein in the powers America wielded in the age of terrorism. It’s a chapter that Biden has indicated—at least outwardly—he would like to move beyond. The President has announced the U.S. military plans to withdraw all forces from Afghanistan by Aug. 31 and wrap up its combat mission in Iraq by year’s end. The Geneva Conventions and the international laws of war state that when a conflict is ended, prisoners detained pursuant to that conflict must be released and repatriated unless they’re charged with crimes.

Over the years, Guantanamo prisoners’ physical treatment and the U.S. government’s legal contortions to hold so many without charge have sparked international outcry from the United Nations, human rights organizations and the Cuban government, which complained that the territory was being used as a “concentration camp.” Of the roughly 780 people detained in Guantanamo since its establishment in 2002, many have been found to be non-combatants with no ties to either the Taliban or al-Qaeda, mistakenly apprehended or wrongfully turned over by anti-Taliban bounty hunters in Afghanistan. Just ten men at the prison today have cases dealing with war crimes, and only two have been tried, convicted and are now serving time.

The outcome of the Administration’s low-profile efforts to end this era is less than certain. Rather than delivering speeches or issuing mandates, Biden has worked behind-the-scenes to finish the work Obama started. The work of the Periodic Review Board, the parole-like board set up by the Obama Administration in 2011 to speed the process of transferring detainees out of Cuba, will continue under Biden to clear prisoners for release to foreign governments. The board helped Obama reduce the prisoner population from 245 to 41 detainees. Just one detainee was transferred out under former President Donald Trump, who issued an executive order to keep Guantanamo open indefinitely.

Biden has thus far rebuffed requests by Democratic senators to reestablish Obama-era offices at the State and Defense departments, which were dismantled by the Trump Administration, tasked with the singular mission to close Guantanamo. He’s also chosen not to name a Special Envoy to negotiate the transfer of prisoners to foreign countries. Instead diplomats in U.S. embassies across the globe, under the leadership of State’s Bureau of Counterterrorism, are working to repatriate the detainees cleared for release. “The Biden administration will apply all the necessary diplomatic resources to facilitate the transfer of detainees found eligible,” a senior administration told reporters on July 19.

After the detainees cleared for repatriation are transferred elsewhere, the White House will have to persuade Congress to bring the remaining prisoners on the U.S. mainland. That will be far more daunting task. Ten men are currently awaiting legal action through military commissions authorized by the Bush Administration, which is a costly and painfully slow process that—at its current pace—will keep Guantanamo open for years. But bringing the detainees to the U.S. is fraught with challenges on everything from where the detainees can be tried in court to where they can be imprisoned.

The biggest hurdle to moving those remaining detainees is legal. For a decade, Congress has included language in every Defense bill that forbids Guantanamo prisoners from coming stateside, citing the threat they might pose. The White House’s selling-point to the GOP, many of whom backed Trump’s order to keep the prison open, is that it currently costs about $140 million a year to keep the detention facility open along with assigning 1,500 personnel to run it. That breaks down to more than $3 million per prisoner per year—a price tag that will assuredly rise as more aging detainees require geriatric care.

Biden is now the fourth U.S. president that human rights groups have pushed to close Guantanamo. In January, as Biden prepared to take office, Amnesty International released a report documenting human rights violations perpetrated against those detained at the camp, including torture, inadequate medical care and the absence of fair trials. “These are detentions that are inescapably bound up with multiple layers of unlawful government conduct over the years – secret transfers, incommunicado interrogations, forced feeding of hunger strikers, torture, enforced disappearance, and a complete lack of due process,” said Daphne Eviatar, director of the nonprofit’s security with human rights program.

Mark Maher, a lawyer at Reprieve U.S., an international human rights organization that represents five detainees at Guantanamo, said he’s encouraged that the Biden Administration is revitalizing the processes to close the facility. “What is important for the Administration to do is to solve the easy cases—those people who aren’t charged and never will be charged with the crime and never will face trial,” he said.

Before his release, Nasser, 56, was among Guantanamo’s longest serving prisoners. Having been detained as an “enemy combatant” in 2002, he was taken to Guantanamo not long after it was established. And yet, despite two decades of incarceration, the U.S. government failed to demonstrate exactly why it upended Nasser’s life. He was never charged with a crime. He never had a trial.

“It sounds awful, but his case isn’t even that unique. There are many people who have been there for 14 to 19 years,” said Maher, who served as one of Nasser’s lawyers. “Do we as Americans really think that people should be held in prison—on an island thousands of miles away from their families—without any opportunity to stand up in a real trial and challenge the reasons for their detention, possibly for the rest of their life?” 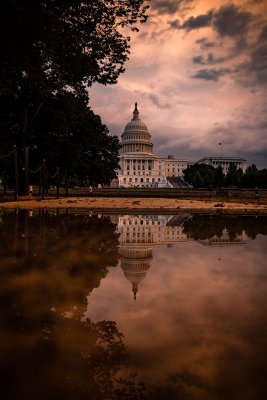 The House Just Passed Federal Spending Bills Without Abortion Restrictions for the First Time in Decades
Next Up: Editor's Pick