Music Television Is Everywhere Post-MTV. But Does It Have to Be So Nostalgic?

Behind the Music is back, and this time it’s uncanny. The fundamental strangeness of the revival, debuting July 29 on Paramount+, hit me around seven minutes into a series premiere devoted to Ricky Martin—an extremely worthy subject who was originally profiled by the show in 2000 and then saw his episode updated 11 years later, not long after he came out as gay. The premiere features a clip from that 2011 version in which Martin looks back on his youth in Latin-pop boy band Menudo and muses: “When you’re 12 years old and you’re in front of 200,000 people, and people are telling you ‘Yeah, man, you’re the best!,’ you become like a little god.” Midway through that comment, the screen splits and suddenly we’re watching Ricky Martin ca. 2021 start to get emotional as he watches Ricky Martin ca. 2011 reflect on the experience of being Ricky Martin in the mid-’80s.

This surreal moment captures the frustrating redundancy of the streaming reboot of a show that, when it premiered on VH1 in 1997, set the template for storytelling about the lives of famous musicians. Of the eight artists whose forthcoming episodes have been announced, none began their career later than the mid-’90s, and only one (rapper Fat Joe) hasn’t already appeared on Behind the Music. The show feels endemic of a somewhat worrisome trend in the relationship between TV and pop these days. As streaming services race to fill every content niche, there have never been more nonfiction shows about music and the people who make it. Yet in the years since MTV abandoned its eponymous mission, much of the programming devoted to an art form synonymous with youth, newness and immediacy has become—like the second revision of a doc about a singer who made his biggest impact a generation ago—weirdly nostalgic. There are notable exceptions, like Watch the Sound With Mark Ronson on Apple TV+ (more on that later), though they remain rare amid the glut of retro-oriented journeys into the past.

It was baby boomers who defined their culture through rock ‘n’ roll and baby boomers who dreamed up MTV. Now, it’s baby boomers to whom so much music-oriented television caters. This past spring, Apple TV+ unveiled 1971: The Year That Music Changed Everything, a solidly constructed eight-part docuseries based on David Hepworth’s book Never a Dull Moment, which makes a case for the year as the single most important in the history of rock. Directed in part by executive producer Asif Kapadia, the filmmaker behind the great Amy Winehouse doc Amy, 1971 explores a different theme in each episode, positing music as a driver of social change through deep dives into civil rights, drug culture, feminism, queer liberation and more. Though it’s conventional in format and the nostalgia quotient is high at times, the show engages on a deep enough level with individual artists and songs to make a compelling case. It works because it has something that too much recent, dashed-off nonfiction TV lacks: a point.

Of course, when it comes to pop music, there’s something to be said for artful aimlessness. Take Hulu’s McCartney 3,2,1—approximately the zillionth Beatles documentary and another boomer nostalgia trip, to be sure, but one that’s surprisingly pleasant even if you hit your lifetime limit on the White Album decades ago. In six tightly edited half-hour episodes that feel deceptively loose, Paul McCartney walks super-producer Rick Rubin through many of the songs that made his career, often swerving into reminiscences about hitchhiking with George Harrison as teens and the unforgettable experience of a Fela Kuti performance in Lagos. Because the interview takes place in a studio where they’re surrounded by instruments, the pair can recreate any sound they wish. A modest, shadowy black-and-white palette cuts through McCartney’s aura of uber-celebrity and gives the series an air of timelessness. It’s like an anti-Beatles Anthology; after all these years, it’s still possible to create a low-key portrait of a rock legend.

Rock portraiture happens to be the subject of a thoughtful, if slightly flabby, six-part docuseries airing on Fridays through August 13 on PBS. With the great photographer Gered Mankowitz (best known for his arresting images of Jimi Hendrix in 1967) among its executive producers, Icon: Music Through the Lens showcases the biggest names in the medium, from David Bowie collaborator Mick Rock to punk and hip-hop chronicler Janette Beckman to Jesse Frohman, who shares a haunting reminiscence of Kurt Cobain’s final photo shoot. The material lends itself to contemporary questions that rarely get raised: is it a coincidence that so many young, white, male rock photographers of the ’60s and ’70s were able to earn the trust of bands that were also young, white and male? What role have photographers played, as witnesses if not participants, in exploitative groupie culture? Though it makes some effort at currency, interviewing a few younger photographers and concluding with a strong episode on how digital technology and social media have changed the form, the core of the miniseries is reverent, wistful and often insightful storytelling about musicians of the past.

Along with the debauchery, what Icon’s subjects seem most nostalgic for is access—for the bygone days when the biggest bands in the world would let cameras follow them onstage and off, snapping the most candid of candids, with no desire to censor other artists’ work. Access may well be the underlying issue for the new Behind the Music. Now that social media provides celebrities direct access to millions of fans, top-tier stars like Rihanna, Taylor Swift and Drake have little incentive to grant interviews to journalists or TV producers who aren’t on their payroll and thus have the autonomy to frame conversations in unflattering ways. Instead of having their lives shoehorned into Behind the Music’s prototypical narrative of a rise to fame followed by obstacles and perseverance, the Beyoncés and Lady Gagas of the world produce their own films.

So, how do you make a music show that feels relevant when the most relevant names in music are so rarely down to participate? One popular approach is to get granular while catering to tastes as omnivorous as those of younger generations, taking on salient topics in pop rather than profiling any one artist at length. The Netflix adaptation of hit podcast Song Exploder is catnip for songwriting nerds; each brief episode goes satisfyingly deep into just one track, whether it’s a classic like R.E.M.’s “Losing My Religion” or a current pop single like Dua Lipa’s “Love Again.”

More ambitious but also frustratingly uneven is June release This Is Pop, also on Netflix, an anthology series that’s as broad as its title suggests. There are excellent episodes, most notably a revisionist take on widely misunderstood recording technology Auto-Tune that checks in with its unwitting casualty T-Pain and gains perspective from pioneers of vocal manipulation. Others fall short. A Britpop retrospective largely reduces a diverse movement to a rivalry between Oasis and Blur. Opening episode “The Boyz II Men Effect” starts to make a smart argument about the way white boy bands appropriated the R&B group’s sound but ultimately pulls punches. As with so many quickly made docuseries in the streaming age, part of the problem is the creators’ failure to either explicitly connect the episodes or frame the show as a cumulative whole. (HBO’s new music-doc anthology Music Box, which kicked off with July’s much-discussed Woodstock 99: Peace, Love, and Rage and will also include features on DMX, Kenny G and Alanis Morissette’s Jagged Little Pill, might prove to be equally disjointed.)

The first series of this crowded summer for music on TV that really jibes with the way people of all ages listen is Watch the Sound With Mark Ronson, an Apple TV+ original that debuts on July 30. Looking forward more often than he looks back, host Ronson—the producer behind meme magnet “Uptown Funk,” A Star Is Born mega-hit “Shallow” and Amy Winehouse’s Back to Black—takes on the difficult task of explaining various elements of sound without putting non-gearheads to sleep. An episode on reverb takes him to a disused underground oil tank in Scotland, home of what is probably the longest echo in the world. The show’s format can be playful, too. In a clever illustration of the topic at hand, an installment on sampling fills transitions between segments with collages of sounds and images from other parts of the episode.

Born in the ’70s, Ronson, like any competent producer, is nonetheless fluent in the pop music of the past; he recounts dissecting the girl-group sound with Winehouse and talks “Tomorrow Never Knows” with McCartney. But he’s not overly reverent about it. In Watch the Sound’s Auto-Tune episode (which is worth watching even if you’ve seen This Is Pop’s take), Sir Paul declares that “if John Lennon had had an opportunity [to use the software], he would’ve been all over it.” So Ronson goes into the studio with Lennon’s son, Sean Ono Lennon, to mess around with the vocals on “Hold On.” It’s an approach that transforms old songs into living documents, capable of interacting with current technology and tastes, rather than dusty museum pieces.

The show moves fluidly between genres, touching down in hip-hop and chart pop, indie rock and dance music, only rarely acknowledging artificial aesthetic divides, as eclectic as any music fanatic’s playlist. In studio-set segments with musicians such as Charli XCX, King Princess and Angel Olsen, women appear not as malleable voices to be shaped by Ronson or another male svengali, but as creators with insights and styles all their own. If this level of representation seems obligatory in 2021, consider that (although a Jennifer Lopez episode is in the works) not one of the first eight Paramount+ Behind the Music episodes has a female subject.

To its credit, Behind the Music acknowledges our highly politicized moment; Ricky Martin’s episode delves into his activism over the past few years in Puerto Rico, while a reconsideration of LL Cool J is framed around a return to rapping inspired by the Black Lives Matter movement. But Watch the Sound’s point of view is truly global. In one great segment, British-Iranian multidisciplinary artist Ash Koosha, who invented an AI “singer-songwriter” known as Yona, explains that there is a political aspect to the project. “My story was that, the bands we were in, we were restricted. We went to prison for playing a concert,” he says. You can’t arrest an artificial intelligence.

What I appreciate most of all about the show is its immediacy—its understanding that a great piece of music means more, in the lives of people who love it, than just a point on a timeline or an expression of genius or even a political statement. Before all that, it’s a feeling. Reverb, as Watch the Sound so accurately describes it, conjures a sense of our smallness as individual humans in the infinite universe. Distortion is urgency in the language of rock. “When the vocal goes into the red,” riot grrrl legend Kathleen Hanna tells Ronson, “it’s like the sound of birth.”

The old, weird MTV, of boundary-pushing music videos that electrified Gen-X teenagers and scared their parents, is never coming back. And 40 years after its arrival, that’s probably healthy. What’s worth reviving from that much-mythologized era isn’t any particular franchise or format; it has nothing at all to do with nostalgia. What we need—teens, adults, people of every generation—is television that expands the music we hear and feel into something we can also see. 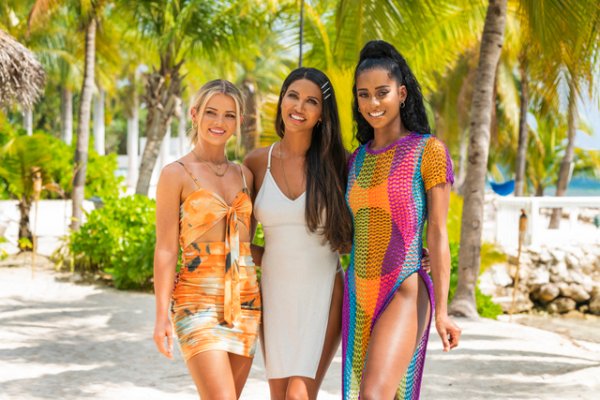