People protesting Arkansas House bill HB1570, which prevents doctors from providing gender-affirming care to patients under 18, on March 18 outside the Arkansas state House. The bill became law in April, but was temporarily halted by a judge on Wednesday.
Courtesy of the ACLU/Sydney Rasch
By Madeleine Carlisle

A federal judge on Wednesday temporarily blocked an Arkansas law that would have banned transgender youth from receiving gender-affirming health care while a lawsuit challenging the law’s constitutionality proceeds. The law would have gone into effect on July 28.

In April, Arkansas became the first state in the U.S. to approve a ban that would prevent doctors from providing gender-affirming care—including hormone treatment and puberty blockers—to patients under 18. The law would also prevent doctors from referring patients to other physicians who provide gender-affirming treatment. The American Civil Liberties Union (ACLU) filed a lawsuit in May on behalf of four transgender children, their families and two doctors challenging the ban, arguing it violates the Constitution and threatens the well-being of trans youth. On Wednesday, U.S. District Judge Kay Moody in Little Rock, Ark., placed a preliminary injunction on the law’s enforcement while the case moves through the legal system.

“To pull this care midstream from these patients, or minors, would cause irreparable harm,” Moody said upon his ruling, according to the Associated Press.

“This ruling sends a clear message to states across the country that gender-affirming care is life-saving care, and we won’t let politicians in Arkansas—or anywhere else—take it away,” said Holly Dickson, executive director of the ACLU of Arkansas, in a statement. “Today’s victory is a testament to the trans youth of Arkansas and their allies…who will continue to defend the right of all trans people to be their authentic selves, free from discrimination. We won’t rest until this cruel and unconstitutional law is struck down for good.”

Fifteen-year-old Dylan Brandt, one of the four trans children represented in the ACLU's lawsuit, at a protest earlier this year.
Courtesy of the ACLU/Rana Young

“This is who I am, and it’s frustrating to know that a place I’ve lived all my life is treating me like they don’t want me here,” said 15-year-old Dylan Brandt, one the plaintiffs, in a statement when the suit was filed in May. Should the law go into effect, Brandt will lose access to the gender-affirming treatment he’s received for nearly a year.

“Having access to care means I’m able to be myself, and be healthier and more confident—physically and mentally,” Brandt said. “The thought of having that wrenched away and going back to how I was before is devastating.”

Republican sponsors of the law, titled “Save Adolescents from Experimentation (SAFE) Act,” argue that the law is meant to protect minors who they say are too young to make decisions related to gender-affirming care. Trans rights advocates have condemned the argument as dangerous, noting that all medical decisions related to minors are made in consultation with their parents and their medical provider, and arguing that the law prevents doctors from providing potentially lifesaving treatment.

Republican Arkansas Gov. Asa Hutchinson had vetoed the bill on April 5, calling it “a vast government overreach.” But his veto was overrode by the Republican-majority state legislature the next day, in a 71-24 vote in the House and a 25-8 vote in the Senate.

“These young people will be unable to obtain medical care that their doctors and parents agree they need—and those already receiving care will have their treatment abruptly halted—which could have serious and potentially life threatening consequences,” the ACLU’s filing said, arguing that the bill violates both the Equal Protection Clause and the Due Process Clause of the Fourteenth Amendment, as well as the First Amendment by prohibiting healthcare providers from providing referrals.

“For some transgender youth, the prospect of losing this critical medical care, even before the legislation is in effect, is unbearable,” the filing continued. “In the weeks after the bill passed, at least six transgender adolescents in Arkansas attempted suicide.”

The Arkansas law is just one of numerous bills targeting transgender rights that have been proposed in state legislatures in the past seven months. At least 250 pieces of anti-LGBTQ legislation have been introduced in state legislatures in 2021 alone, according to the LGBTQ advocacy group Human Rights Campaign, and at least 35 of those aim to limit the ability of transgender youth to receive gender-affirming medical care.

Some of those bills have also been the subject of litigation; earlier in July a federal judge in Tennessee also blocked a law that required businesses and other entities from notifying customers if they allow transgender people to use public restrooms that match their gender identity, in response to a suit filed by the ACLU.

If you or someone you know may be contemplating suicide, call the National Suicide Prevention Lifeline at 1-800-273-8255 or text HOME to 741741 to reach the Crisis Text Line. In emergencies, call 911, or seek care from a local hospital or mental health provider. 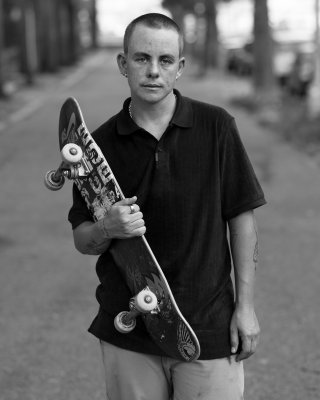 ‘I Couldn’t Keep Putting Myself on Hold.’ In Missing Out on the Tokyo Olympics, Skateboarder Leo Baker Found Himself
Next Up: Editor's Pick