You know the summer TV season is in full swing when the new reality dating shows start to sound like fake NBC series from 30 Rock. Too Hot to Handle, Are You the One?, I Wanna Marry ‘Harry’—these are the high-concept, low-I.Q. series that keep us mildly amused when it’s too humid out to think. But this July is a banner month even for hot trash summer. First Netflix unveiled Sexy Beasts, which sends singles to meet potential mates done up in SFX makeup worthy of David Cronenberg. HBO Max counters, on the 29th, with FBoy Island, a resort-set dating competition that challenges three women to separate the nice guys from the cads. It’s impossible to hear the title without thinking of Jack Donaghy’s beloved MILF Island.

Although the trailer for Beasts caused a brief eruption of incredulity on social media, there is nothing shocking about the existence of these two extremely silly shows. What’s truly surprising is the gulf in quality between them. FBoy happens to be a funny, addictive, shrewdly executed twist on a familiar format. I can’t say the same for Beasts, which gets old as soon as you get over the novelty of people in Halloween drag deliberating over whether they “feel a connection.” When it comes to entertainment value—the only criterion by which it’s fair to judge this stuff—the distance between good and bad trash can be vast.

Beyond its furry, greasepaint-caked, The-Masked-Singer-meets-Love-Is-Blind exterior, Beasts harkens back to the low-budget cable dating shows of the aughts: Blind Date, elimiDATE, Next. While the makeup is elaborate, the format is simple. A man or woman whose face is obscured by a custom animal, sci-fi or horror mask has three one-on-one chats with similarly disguised singles of the opposite sex. (Normally I would complain about the lack of queer couples, but in this case, I think the LGBTQ community lucked out.) Following an elimination that ends with a glimpse of what the person who got cut looks like without the zombie mask, the remaining contestants go on longer dates and a final selection is made. The freshly scrubbed couple shares a kiss for the cameras, though who knows if they ever so much as see each other again.

All of this is executed with the least possible effort or ingenuity, from the generic bar where the first dates take place to the casting, which must’ve prioritized cockiness over all other traits. Eliminations take place, for unknown reasons, at a posh British country estate dubbed the Sexy Beast Manor. Instead of an on-camera host, we get voiceover narration from comedian and Catastrophe star Rob Delaney, who sounds like he’s being held hostage in some sort of Mystery Science Theater 3000 scenario. “Could you fall in love with someone based on personality alone?” he asks in the intro. But the conversations are so shallow, I’d hate to think they offer an accurate glimpse of anyone’s personality. And it’s not as if participants get zero information about each other’s looks; body shape, skin color and sense of style are all on display.

Ultimately, Beasts is just dull—the only real sin for a summer reality-TV confection. Episodes that top out at 25 minutes feel twice as long and culminate in no great desire to hit the “next episode” button. So (and here’s something I never thought I’d type) thank heavens for FBoy Island. Like Love Island, Temptation Island and, sure, MILF Island before it, FBoy transports a couple dozen hot people to the kind of luxury-beach-resort backdrop where even non-exhibitionists might plausibly wear swimsuits all day. At the center of the game are three gorgeous women, Sarah, Nakia and CJ, looking to get into serious relationships with men who really care about them. Of their 24 chiseled suitors, half are self-identified Nice Guys—guileless dudes who really have come to find love—and half are FBoys (a cleaned-up version of the obvious profane slang term) competing solely for a cash prize.

In the wrong hands, a premise like this could yield the same sexist schlock that is standard for this kind of dating show: look at these poor, stupid girls falling for all the old womanizer gambits. This is where FBoy’s smart execution makes all the difference. Crucially, the women not only come off as relatively intelligent and perceptive, but also generally have each other’s backs, collaboratively sleuthing to sniff out FBoys and saving each other from unpleasant dates. It’s a refreshing change from the catfights that The Bachelor and its clones are always serving up. With a few fun exceptions, the show also conceals from both viewers and the other men whether each contestant is a Nice Guy or an FBoy. This shatters the illusion that it’s easy to tell who’s who, while also maintaining suspense and allowing us to play along from home.

I binged through the six episodes sent for review, each one clocking in around 45 fleet minutes, and they deliver some pretty enjoyable twists. Some have to do with FBoys pulling off devilishly believable Nice Guy acts; one contestant outed as an FBoy even, confusingly, seems to have convinced himself that he’s actually playing as a Nice Guy. The subsequent chaos makes for a classic reality-TV “huh?” moment. But, without giving too much away, some of the best surprises involve well-timed rule changes and other tweaks to the format, all gleefully rolled out by host and executive producer Nikki Glaser. An advisor to the women and a gentle antagonist to the FBoys, Glaser, a comedian, brings just the right level of self-aware humor. “We watch these shows… and we laugh with the people we’re watching them with,” she has said. “But the shows rarely make fun of themselves or acknowledge the fact that what’s happening is hilarious.”

FBoy Island is not trying to be anything more than a sudsy summer distraction. And by that metric, it’s a masterpiece. In contrast to Sexy Beasts, which never gets more entertaining than it is in the trailer, the show gets better—juicier, funnier, occasionally sexier, more original and compelling and clever—the more time you spend with it. As streaming services thirsty for cheap content pile on interchangeable reality fare, that’s worth celebrating. Two decades into the reign of reality TV, and with all due respect to Jack and Liz, it’s a pleasure to see some of the genre’s torchbearers do more than the minimum. 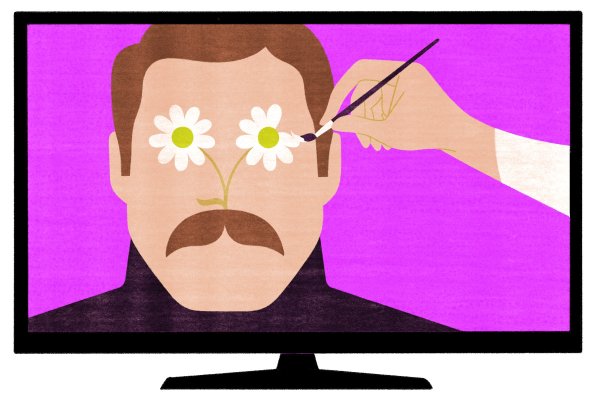 Ted Lasso and TV's Quest to Build the Perfect Man
Next Up: Editor's Pick