'I've Never Seen This Level of Fear.' Why Asian Americans Are Joining the Rush to Buy Guns

Six months ago, Svetlana Kim was so scared of guns, she couldn’t even look at an image of one without feeling anxious.

If she was home watching a movie that suddenly depicted gun violence, the 47-year-old accountant would scramble to hit the fast-forward button on the remote. If she couldn’t skip the scene, she would shut her eyes, and her husband would gently put his hand over hers until the scene was over. Kim knew it was just a movie, but in those moments, she couldn’t help but feel like she was in the victim’s shoes, staring the shooter in the eye.

“My brain was always signaling danger. I just felt like, it’s here, it’s present,” says Kim, who blames empathy and imagination for her visceral reaction, since she has never personally experienced gun violence. “It was bad like that, and I couldn’t control it.”

That all changed when something scarier came along. Months into the pandemic, people who looked like Kim were being shoved and kicked to the ground, punched, stabbed and slashed, while doing everyday activities like walking around the neighborhood, shopping and riding buses and trains. One after another, unprovoked, racist attacks against Asian Americans being unfairly blamed for the COVID-19 virus started to increase in major U.S. cities. Kim wondered if she could be the next victim.

“It was a turning point when I saw that people just randomly got attacked based on their race,” says Kim, a Korean American, who lives in Downey, Calif.

On March 3, Kim went from being a “really anti-gun person” to the new owner of a Springfield Armory handgun.

After months of rising anti-Asian hatred, many others like Kim are having a change of heart about firearms. Tired of relying on bystanders for aid that sometimes never comes, more Asian Americans are bucking entrenched cultural perceptions of guns and overcoming language barriers to help fuel a spike in U.S. gun ownership. While there is no official data on firearm purchases by Asian Americans, a survey by the National Shooting Sports Foundation (NSSF) indicated that Asian Americans bought 42% more firearms and ammunition in the first six months of 2020 than they did in the same timeframe the year before. At Jimmy’s Sportshop in Mineola, N.Y., where guns and pepper spray have been flying off the shelves since the pandemic, gun purchases by Asian buyers have surged 100% due to recent fears of attacks, according to Jimmy Gong and Jay Zeng, the shop’s Chinese-American owners.

“Everybody got paranoid,” says Gong, 47, adding that some might have good reason to feel that way. Several customers have walked into the business, saying they were targeted in robberies, home invasions and assaults. “Some guys come in with black eyes,” Gong says.

From March 2020 to March 2021, reported hate incidents against Asian Americans nationwide jumped 74% to more than 6,600, according to Stop AAPI Hate, a reporting database created at the beginning of the pandemic. Anti-Asian hate crimes in 16 of America’s largest cities increased 149% in 2020, according to an analysis of official preliminary police data by the Center for the Study of Hate & Extremism at California State University, San Bernardino. The sustained violence has shaken Asian-American communities, particularly in New York and California, where the majority of the hate incidents have unfolded and where assaults on the elderly have sent shockwaves across the world. Terror grew on March 16 after a white gunman killed eight people, including six Asian women, at Atlanta-area spas.

“I’ve never seen this level of fear,” says Chris Cheng, 41, a professional sport shooter in San Francisco, who has been fielding numerous questions from relatives, friends and strangers about buying guns.

Jimmy Gong, co-owner of Jimmy’s Sportshop in Mineola, N.Y., shows a revolver to customers on July 10, 2021.
An Rong Xu for TIME

A Pew Research Center survey conducted after the Atlanta massacre found that one in five Asians blame former President Donald Trump for the uptick in violence against them. Ericson Reduta, a 49-year-old Californian who had been on the fence about buying a gun for years, armed himself for the first time in 2020, largely due to Trump’s xenophobic rhetoric. Before then, Reduta had done his homework on firearms but had not purchased one, mostly because he thought his Filipino-American family wouldn’t approve and that he wouldn’t feel comfortable in any gun membership groups. “Most gun owners you see on TV or on the internet are white, conservative, Republican, outspoken, former military or hunters in the Midwest,” says Reduta, a Democrat. “That’s just what I saw.”

Read more: Racist Slurs, Broken Glass, Then a Return to Business for an Asian-Owned Store

But as Trump doubled down on his divisive nicknames for COVID-19, including “the China virus” and “Kung Flu,” Reduta gave in. He says growing up as a person of color in the U.S. gave him the foresight to know that bigotry already existed and would only get worse if a sitting president was singling out an entire race. “Unfortunately, we are the scapegoat,” he says.

In the spring of 2020, Reduta participated in a firearm safety class over Zoom, joined a national gun club for liberals, and then purchased three pistols and an AR-15 rifle.

Gun ownership is most common among white men, particularly those who live in rural areas and those who describe themselves as conservative, according to the Pew Research Center and other surveys. During the first six months of 2020, gun buyers were nearly 56% white males, the NSSF said, citing an industry survey of 104 retailers, which tracks with other national demographic surveys on gun ownership trends. Only about 3% of gun buyers were Asian males and less than 1% were Asian females, the survey found, so Reduta’s initial concerns about fitting in might have been warranted.

Asians have been historically underrepresented among gun owners, so much so that major national demographic surveys conducted on gun ownership trends in the past have left out Asians as a category entirely. A 2013 NSSF report on diversity found some reasons why. About 35% said gun ownership negatively impacts their ethnic community, while 38% said owning a firearm is not desirable in their culture, according to the report, which was based on a national survey of 6,000 white, Black, Hispanic and Asian adults. That was true for Reduta, who waited a year to tell his family that he had bought a gun. Kim still has not shared the news with her two sisters.

“Asians never like guns,” says David Liu, another gun shop owner who has seen a spike in his Arcadia, Calif. business. “They only buy guns after they’ve become a victim.”

There’s a lot more to it, says Cheng, who testified before the Senate’s Judiciary Committee on March 23 about the “real and imminent threat” convincing Asian Americans that they need to arm themselves. Besides having to overcome negative cultural perceptions about firearms, language poses a challenge. The vast majority of gun shops and gun ranges in the U.S. have English signage and instruction, Cheng says, and a good understanding of the English language is necessary to fill out federal background check forms. “You have literal language barriers,” he says.

Read more: The Long Legacy of Anti-Asian Violence in America

On a Monday afternoon in June, the handful of masked customers who trickled into Jimmy’s Sportshop, on a business strip in a suburb about a dozen miles outside of New York City, did not speak English. That’s common, says Gong, who often accompanies those customers to police precincts when their applications are wrongly denied and when they’re unable to fight their case on their own. “It would be a problem for them to buy from a non-bilingual speaking gun shop,” he says.

At least one gun group plans to tackle that issue. In the aftermath of the Atlanta shooting in March, Patrick Lopez, 46, created the Asian Pacific American Gun Owners Association (APAGOA), a California-based nonprofit educational resource group, which features on its website downloadable posters of basic gun-safety rules available in multiple languages. More than 500 people have subscribed in just four months—and Lopez says interest grows each week, largely by word-of-mouth.

Jimmy’s Sportshop in Mineola, N.Y., promotes itself and caters to Chinese-speaking clients.
An Rong Xu for TIME

Racial tensions have been spurring gun sales among people of color since 2020. Not everyone sees that as a good thing, including Alex De Ocampo, a Filipino-American who knows firsthand the trauma a firearm can bring. When he was 9, he says three teens burst through the door of his family’s one-bedroom apartment in Los Angeles and demanded money. One of them held a gun to his forehead, while his father, in the final stages of spinal cancer, cried and begged them to leave.

“I remember vividly thinking of my mom and my dad, when that gun was pointed at my head,” says De Ocampo, who was convinced he would die that day. After his older sister offered the intruders the $4 in her wallet, the robbers fled, leaving De Ocampo and his family unharmed. But the incident changed him.

Read more: For Asians Living in the Shadow of the Atlanta Shootings, Anger and ‘Just This Constant Fear’

Now a 41-year-old community activist, De Ocampo tells as many people as he can that more guns are not the answer. His warnings have fallen on deaf ears for at least one of his relatives, who bought a gun because of the increase in anti-Asian hate. The other day, his teenage nephew suggested that the family get his grandmother a gun, too. “That we have to resort to that is terrifying and it’s just sad,” he says. De Ocampo thinks about his father, who died in 1991 after immigrating to the U.S. for a better life, and how this is not the world his father wanted for his loved ones.

“If more guns made people safer, this would be the safest country on Earth,” De Ocampo says. “But that’s not the reality.”

Gun-control advocates agree, saying firearms largely cause more harm than good, despite so many people purchasing them for self-protection. There were more than 43,500 gun deaths and 39,000 gun injuries in the U.S., last year, compared to about 39,500 deaths and roughly 30,000 injuries in 2019, according to the Gun Violence Archive, which uses police and news reports and varioius government sources to tally daily gun-violence incidents.

Svetlana Kim sees things differently. Since she became a gun owner, her confidence has skyrocketed, and she no longer feels she has to shrink away from confrontation. “It just opened for me a whole different world,” Kim says. She’s become a regular at the shooting range, where she boasts of hitting targets 75-yards away. Now, she and her husband are going back to finish old movies she fast-forwarded.

“The happiest person in the world is my husband,” she says. “We don’t have to skip anymore.” 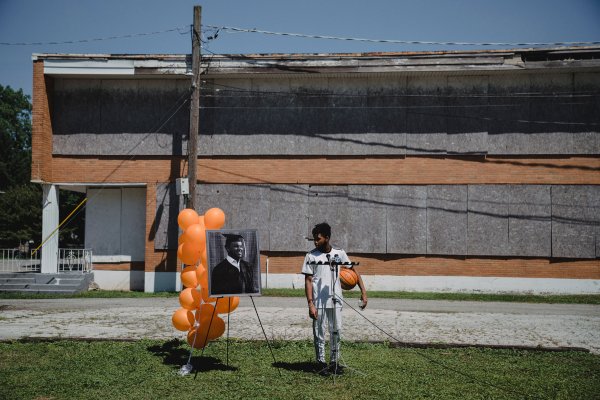 The Toll of Unsolved Inner-City Murders in Chicago
Next Up: Editor's Pick