Ahead of International Nonbinary People’s Day on July 14, new research released Monday by the LGBTQ mental health nonprofit the Trevor Project found that over one in four (26%) LGBTQ youth identified as nonbinary. An additional 20% said they are not sure or are questioning whether they identify as nonbinary.

The term “nonbinary” refers to people whose gender does not fit within the traditional binary construction of male or female. Drawing from an online survey conducted between October and December of 2020 of over 34,700 LGBTQ youth in the U.S., the Trevor Project found that while the term “nonbinary” has often been associated with a trans or transitioning person, only half of the respondents who identified as nonbinary also identified as transgender. (An additional 20% said they were not sure or questioning whether they are transgender).

“We need to reevaluate and start to think about [trans and nonbinary people] as communities that overlap heavily, but are not synonymous with one another,” says Jonah DeChants, a research scientist at the Trevor Project, citing an “explosion of language that we’re seeing around how young people express their gender.”

(Queer is also a term people can use to identify their sexuality, which is separate from gender identity. Most the nonbinary youth sampled reported being multisexual or attracted to multiple genders.)

“More and more young people are taking control over their gender identity, and finding language and terms that resonate with them,” DeChants continues. “And expressing that in the world in [ways] that we haven’t necessarily seen in the past.”

“It was very affirming to see that this is an identity that emerges, regardless of your racial or cultural background,” says DeChants. (A roughly ten percentile difference was found, however, between those identifying at nonbinary who were assigned female at birth (28%) and those as male (17%).)

The majority of nonbinary respondents said they use pronouns outside the gender binary—such as “they/them” or “xe/xem.” Here, DeChants notes an “emphatic response” from those surveyed: that respecting a young person’s correct name and pronouns is a crucial step in making them feel affirmed in their gender identity. “You almost never see that kind of data saturation in such a large sample,” DeChants says. “Pronouns are a small, easy step that anyone can do that can have an enormous impact on how LGBTQ people, trans and non-binary people feel in any given space.”

DeChants adds that the Trevor Project has found that “respect for pronouns is correlated with decrease in attempted suicide, and is associated with a real increase in quality of life and mental health for young people.” (The research released Monday found that nonbinary youth who said “no one” respected their pronouns reported a more than 2.5 times higher rate of attempting suicide in the past year than those who said their pronouns were respected by “all or most of the people” they know.)

“Sometimes folks who are in that affirming position, like teachers, coaches or parents, we don’t always understand the impact that we’re having on a young person in that moment,” DeChants says, noting the need for more LGBTQ cultural competence training for adults who work with young people. “So that is a key takeaway for me—that we can all be that person who provides that respect and affirmation for the trans and nonbinary people in our lives.” 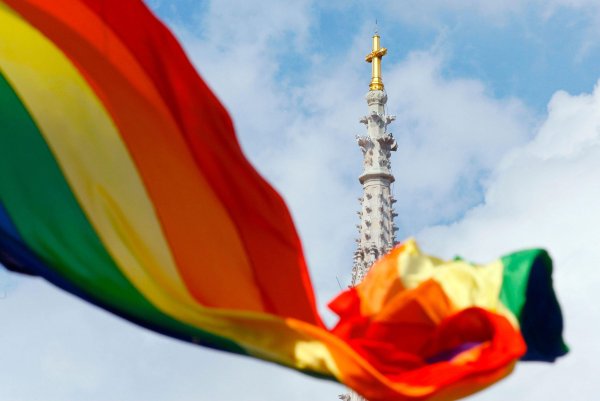 Christian Colleges Must Do Better to Support LGBTQ Students
Next Up: Editor's Pick