The U.S. Supreme Court ruled on Thursday that two controversial Arizona voting laws do not violate the Voting Rights Act (VRA), in a decision that weakens the landmark voting rights legislation amid a nationwide debate over Americans’ access to the ballot. The justices split 6-3, with Justice Samuel Alito writing for the conservative majority and the Court’s three liberal members dissenting.

The case, Brnovich v. Democratic National Committee, was brought by the Democratic National Committee in 2016 against two Arizona voting laws that ban ballot collection and require officials to throw out ballots cast in the wrong precincts. Voting advocates say both laws discriminate against minority voters, particularly Native Americans, and are in violation of Section 2 of the Act that prohibits racially discriminatory voting laws. A federal appeals court had ruled in the DNC’s favor in 2020, and the Supreme Court overturned that ruling on Thursday.

The ruling comes as the partisan battle over voting access has escalated in states across the nation this year. Democrats and voting rights advocates say the new ruling will make it harder to fight a raft of GOP-backed voting restrictions introduced since former President Donald Trump ignited widespread and unsubstantiated fears of voter fraud after the 2020 election. As of June 21, 17 states have enacted 28 restrictive voting laws, many of which experts say disproportionately impact voters of color.

Thursday was “a dark day for democracy,” says Anthony Michael Kreis, a constitutional law professor at Georgia State University, in an email. “The Supreme Court took what is one of our country’s bedrock laws, the Voting Rights Act, and gutted it for the second time in eight years, making it much harder to bring claims against state election laws that have a disparate impact on minority voters.”

Republicans welcomed the Supreme Court’s ruling that will help protect other new laws that the party says are designed to target voter fraud. The GOP National Committee Chairwoman Ronna McDaniel called it a “resounding victory for election integrity.”

Many legal experts agree the ruling will make it harder to use the Voting Rights Act to challenge racially discriminatory voting laws, though to what extent is not yet clear. The Arizona case hinged on how the Court should read Section 2 of the 1965 Act, the only section of the law left with teeth after the Court significantly weakened it in 2013. That year, in its ruling on Shelby County v. Holder, the Court gutted Section 5 of the law, which required jurisdictions with histories of racial discrimination to submit changes to voting laws to the Justice Department or district courts for review. The Court argued the requirement relied on decades-old data. It left Section 2, which prohibits laws that discriminate on the basis of race, as the only tool to challenge restrictive policies.

While the Court ruled on Thursday that Arizona’s policies did not violate Section 2, it declined to announce an official test for all future cases, instead identifying “guideposts” for courts to use going forward. Those included weighing the size of the discriminatory impact of a given law, as well as what other options voters have to cast a ballot, both standards Brnovich and the Arizona GOP had argued for. Justice Alito also stressed in his opinion that the state’s interest in running fair elections must be given a large amount of weight.

Justice Elena Kagan dissented, along with Justices Stephen Breyer and Sonia Sotomayor, the two other liberal justices on the bench. “Section 2 was meant to disrupt the status quo, not to preserve it—to eradicate then-current discriminatory practices, not to set them in amber,” Kagan wrote in her opinion. She specifically highlighted Georgia’s recently passed election law as problematic for minority voters and referenced the many GOP-backed voting restrictions that have emerged this year, noting how they add barriers to voting by mail and shorten the windows to apply for and return mail ballots.

The ruling will make it much more difficult for people to challenge laws that appear to be “race-neutral”—meaning they in letter apply all voters equally—even if they result in a disparate impact on voters of color, writes Paul Smith, vice president of litigation and strategy at the Campaign Legal Center, which filed an amicus brief in opposition to Brnovich.

Thursday’s ruling is the first time the court weighed in on how Section 2 should evaluate laws that affect how ballots are cast and counted, and could impact rules involving absentee voting, early voting, voter ID laws, and more, says Richard Briffault, a professor of law at Columbia Law School. In order to win a case under Section 2, plaintiffs now must show the “political process in the state is not generally open to minority voters,” that the law in question creates a large burden rather than an “inconvenience” for voters, and specifically has a large impact on minorities compared to white voters, he explains.

The court also made clear that the argument of “preventing fraud is a good argument, even when there is no evidence of fraud,” Briffault says.

But the ruling doesn’t entirely undercut the VRA, as some feared it would. “The Court’s decision today is not the worst-case scenario and will not entirely shut the courthouse doors under Section 2 of the VRA,” says Davin Rosborough, a senior staff attorney with American Civil Liberties Union’s Voting Rights Project, which also filed a brief arguing against Brnovich’s reading of Section 2. But, he adds, it does adopt “a narrow view at odds with the [law’s] history that will in practice undermine the VRA’s intent and make it more likely that only the most blatant and extreme laws may fall under this section.”

To many voting rights’ advocates disappointment, the Biden Administration sent a letter in February to the justices saying it did not believe the Arizona laws violated Section 2, despite the Administration’s stated concern over the expansion of voting rights restrictions across the country. Last week, the Department of Justice sued Georgia over the restrictions in its new expansive voting law, marking the Administration’s formal entry into the voting rights battle. The DOJ mentioned that it will also be evaluating legal action in response to similar laws nationwide, and called on Congress to restore the VRA’s muscle.

In a statement on Thursday, Biden said he is “deeply disappointed” in the Court’s decision and said the ruling “makes it all the more imperative to continue the fight” to pass the voting rights legislation now before Congress, which Democratic state lawmakers and voting rights activists have repeatedly called for. The prospects for doing so look slim. Earlier this month, Senate Republicans blocked the measure, citing states’ rights to run elections and arguing it was designed to benefit Democrats.

Others echoed Biden’s point. “Today’s decision acknowledged the inequitable burden created by Arizona’s laws, including specifically upon Native voters, but indicated that it was not inequitable enough to matter,” said Native American Rights Fund (NARF) staff attorney Jacqueline De León, in a statement calling upon Congress to protect voting rights.

Aderson Francois, a law professor and director of the Voting Rights Institute at Georgetown University Law Center, says in an email that fostering democracy requires making it as easy as possible for Americans to become voters, cast a vote and have their vote counted. “Arizona’s laws, along with the other slew of voting rights restrictions that were passed after November 2020, make it clear that many states are not necessarily interested in democratic self-rule,” Francois says. “Today’s decision effectively sends a signal to these states that it’s ok if they’re not.” 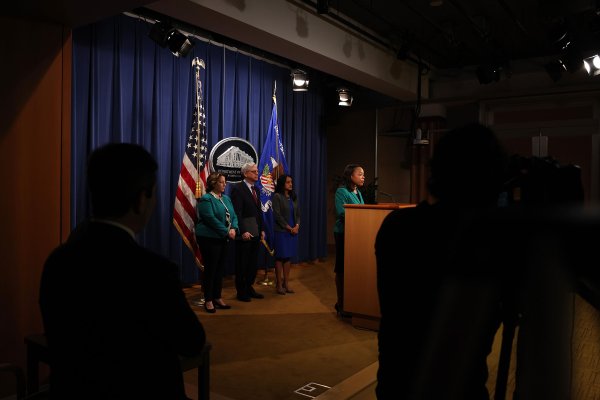