Transgender rights advocates outside the Ohio Statehouse on June 24, 2021, as the House approved a bill that would ban transgender youth from participating on sports teams consistent with their gender identity. At least seven states, including Florida, have enacted similar bills into law.
Stephen Zenner—SOPA Images/LightRocket/Getty Images
By Madeleine Carlisle

HRC also announced plans to file similar challenges to anti-trans laws in Arkansas, Mississippi and Tennessee in the near future, marking the first time it has taken legal action in those states.

“We have seen an unprecedented attack on transgender young people, which requires an unprecedented response,” HRC’s President Alphonso David tells TIME of the group’s decision to bring litigation. “We’re [all] entitled to equal protection under the law. And what this law does is discriminate against transgender girls. It treats them as second class citizens.”

Working with the law firm Arnold & Porter, HRC brought the suit on the behalf of Daisy, a 13-year-old trans girl in Florida, as well as her parents. (HRC granted Daisy a pseudonym to protect her identity, and is only identifying her parents by their first names.) “Playing sports makes me feel like I fit in, the thought of not being able to play next year scares me,” Daisy said in a statement. “I’m going to be lonely and sad if I can’t play.”

Daisy started to express her gender identity at age 4, according to the suit, and started receiving gender-affirming medical care in middle school. Now a rising 8th grader, Daisy plays basketball, softball, and is a goalie on three soccer teams, per the suit. She’s only ever played on girls’ teams, the litigation continues, and has never encountered opposition from her teammates, rival players, coaches or parents of fellow athletes. But Florida’s new law will force Daisy to either play on a boy’s sports team or drop out entirely. Not everyone in her life knows she’s trans, the suit adds, alleging that by forcing Daisy off her teams, the law also outs her as transgender.

“It is a very helpless feeling to know that people think our daughter does not deserve the rights to play sports with her friends—she has been playing with them for the last seven years and it has not been an issue,” her parents said in a statement. “Taking this right away will only further isolate her from her peers… As her parents, we just want her to be happy.”

HRC is challenging the law on several grounds, including violations of the 14th Amendment, which guarantees Americans equal protection under the law, and Title IX’s prohibition of sex discrimination in education. Gavin Grimm, a trans teen in Virginia who challenged his school’s bathroom ban in 2015, made similar arguments in a lawsuit that prevailed before the 4th Circuit Court last year—a victory the Supreme Court let stand on Monday. (On June 16 the Department of Education also said that it interprets Title IX to extend to protections for LGBTQ students.)

Florida is one of seven states that have passed laws banning transgender girls from playing on girls sports teams this year, though lawmakers in several of those states have failed to provide examples of transgender women or girls having an unfair advantage in their state—or instances in which they were aware of trans athletes at all. (In a June 1 press release, DeSantis had argued that his state’s legislation was in the name of protecting “fairness,” saying, “As a father of two daughters, I want my girls, and every girl in Florida, to compete on an even playing field for the opportunities available to young women in sports.”)

Trans rights advocates argue that the surge of anti-trans legislation that has swept state legislatures—HRC calculates over 250 anti-LGBTQ bills have been introduced in 2021 alone—represents a moral panic, and is intended to further a conservative political agenda.

“They are targeting the most vulnerable members of our community in order to score political points. It’s shameful,” says David, speaking about lawmakers proposing such bans. “They’re grasping at straws, and they’re looking to appeal to a base, based on fear and misinformation.”

And when asked if HRC plans on filing litigation in states besides the four announced Wednesday, he put it simply: “Stay tuned.” 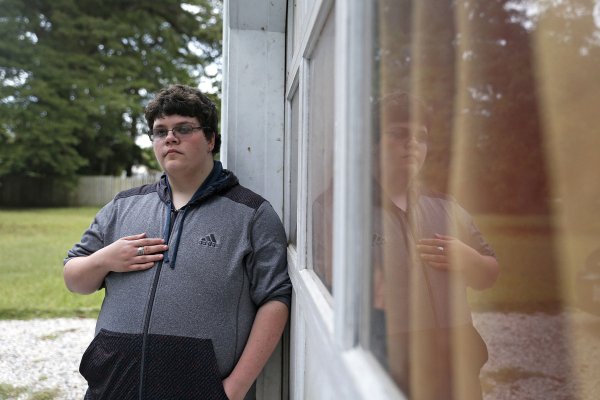