After Weeks of Declining Vaccination Rates in the U.S., They Went Back Up in June. Will the Momentum Last?

On April 8, more than 4.3 million people in the U.S. received a COVID-19 vaccine dose. But after that peak, the numbers began to fall. By June 3, the national seven-day average for daily shots given had dropped to 850,000.

But after that—with weeks to go before the Fourth of July, the date by which President Joe Biden wanted 70% of U.S. adults to have gotten at least one shot—the numbers began to creep back up. On June 7, according to U.S. Centers for Disease Control and Prevention (CDC) data, the seven-day average for daily vaccinations again broke a million. It shrank a bit after that, but was still close to 900,000 on June 15.

While it’s common for daily numbers to go up and down, it’s somewhat surprising that this uptick would happen months after COVID-19 shots became widely available to U.S. adults. Vaccine supply now far outpaces demand. To keep shots going into arms, many states have done away with appointment requirements; opened mobile clinics and partnered with community organizations in areas with low vaccine uptake; and dangled incentives and cash prizes for those who get vaccinated.

But Loren Lipworth-Elliot, the associate director of Vanderbilt University Medical Center’s epidemiology division, says there may be a partial explanation that has nothing to do with those efforts: In mid-May, kids ages 12 to 15 became eligible to receive Pfizer-BioNTech’s shot.

There are about 17 million U.S. adolescents in that age group, according to the Kaiser Family Foundation. As of June 21, 28% of them had received at least one dose of a COVID-19 vaccine and almost 18% were fully vaccinated. That means almost 8 million shots have been given in that age group alone over the last six weeks. “That’s definitely accounting for some of what we’ve been seeing,” Lipworth-Elliot says.

Dr. Mark Roberts, director of the Public Health Dynamics Lab at the University of Pittsburgh’s Graduate School of Public Health, agrees that childhood vaccinations are part of the explanation—but they’re probably not all of it, he says. “You’re seeing a fulfilling of that pent-up demand [for pediatric immunizations], but it’s not going to be huge,” he says, because 12- to 15-year-olds make up only about 5% of the U.S. population.

It’s hard to say exactly what else has been driving the recent uptick, but Roberts says it may have something to do with recent state-run incentive programs, like lottery drawings for vaccinated people. Ohio, for example, reported a 28% increase in vaccinations during the two weeks after it announced its Vax-a-Million lottery in May, compared to the week before the announcement.

Trends vary widely from state to state, Lipworth-Elliot adds. States with relatively low vaccination rates, like Florida, Tennessee and Alabama, are among those seeing recent increases in vaccinations, while daily tallies are logically dropping off in areas where most eligible people are already protected. And while vaccination rates are still lower among Black and Hispanic/Latino people than among white people in the U.S., federal data suggest the gap is narrowing slightly, driven particularly by the Hispanic/Latino population. Both trends, Lipworth-Elliot says, suggest health officials are getting better at bringing vaccines to populations that need them and chipping away at vaccine hesitancy by building trust within communities.

The fact that the CDC now says fully vaccinated people can safely go mask-free, socialize indoors and travel may also be encouraging some holdouts to get vaccinated, Lipworth-Elliot says. “People are seeing that there’s a lot of leeway and freedom given to people who are vaccinated, for good reason,” she says. TIME/Harris Poll data also suggest the CDC’s mask guidance encouraged some people to get vaccinated because they were concerned about the risks of others going mask-free in public.

It’s too soon to say if the positive momentum will continue; both Lipworth-Elliot and Roberts caution that variations in the vaccination data are common, and that it will take time to see how the trends play out. Already, daily averages are lower than they were a couple weeks ago.

But there are reasons for optimism. Shots may become available to kids even younger than 12 by the fall, which would open up a whole new swath of the population to vaccination. And in a recent Gallup poll, about a fifth of adult respondents who said they do not plan to be vaccinated—a group equivalent to about 5% of the U.S. adult population—said they were open to changing their minds. With about 65% of U.S. adults already vaccinated with at least one dose, building trust even within that small group could be the difference between making or missing Biden’s Independence Day goal. 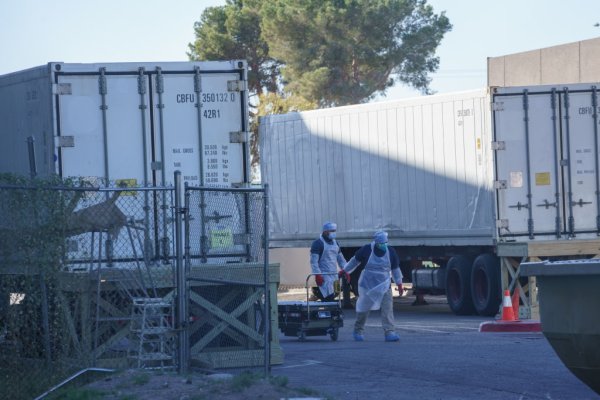 The High COVID-19 Death Toll in Texas-Mexico Border Towns
Next Up: Editor's Pick