What’s going on with the Department of Justice? Over the past few weeks, the Department has raised eyebrows on the left by backing several Trump-era legal positions, including defending former President Donald Trump in a defamation lawsuit from columnist E. Jean Carroll, who accused Trump of sexual assault, and fighting the full release of a 2019 internal memo on the department’s decision to not charge Trump with obstruction of justice.

Meanwhile, some of the department’s other positions simply seem to run counter to the White House’s own agenda. The same day that President Joe Biden tweeted the Senate must pass the Equality Act and outlaw discrimination on the basis of gender orientation and sexual identity, news broke that the DOJ had written in a June 8 filing that it can “vigorously” defend the right of private religious schools to do just that.

Now, new information is emerging about the extent to which the Trump-era DOJ may have acted in ways that were politically motivated, including seeking information about reporters, subpoenaing Apple data from Democratic members of Congress, their aides, and family members while investigating leaks, and pressuring the Department to support the former President’s false claims of election fraud. Though Biden has pledged to not interfere with the affairs of the DOJ, some progressives are concerned that Attorney General Merrick Garland is upholding some of the questionable decisions of the previous Justice Department.

“I think most people expected a Biden appointee to have stronger views on the importance of transparency in government, civil rights and equality, and so some of these early decisions have been surprising,” Barbara McQuade, the former U.S. attorney for the Eastern District of Michigan and a professor at University of Michigan Law School, said in an email. “[Not] because they favor Trump, but because they favor strong executive power and fail to advocate vigorously for civil rights.”

To many, Biden’s nomination of Garland backed up Biden’s pledge to restore the department’s nonpartisan reputation. While Garland may have become a rallying cry for progressives after his Supreme Court nomination was blocked by Republicans in 2016, he is by no means a leftist, says Jennifer Rodgers, a former federal prosecutor and lecturer at Columbia Law School. “He’s an institutionalist,” she says, who is trying to make decisions based on what’s best legally and what’s best for the department, regardless of if Biden or his supporters approve.

Garland has not operated entirely out of step with the Biden Administration’s agenda. On June 4, for example, he laid out a detailed plan on how to further protect voting rights, one of the White House’s stated goals.

When asked about some of the DOJ’s recent positions, including defending Trump in Carroll’s lawsuit and fighting the release of the Office of Legal Counsel’s (OLC) memo, Garland has said he was aware of the criticism. “The job of a Justice Department in making decisions of law is not to back any Administration, previous or present,” he said while testifying before Congress on June 9. “Sometimes it means that we have to make a decision about the law that we would never have made, and that we strongly disagree with, as a matter of policy.”

Many legal experts agree with Garland’s defense. Unlike other cabinet departments, the Justice Department is meant to be apolitical, says Andrew Weissmann, the former chief of the fraud section in the DOJ who served as a lead prosecutor in Robert Mueller’s Special Counsel’s Office. “As the lawyers for the government, its role isn’t to weigh in on whether they agree or disagree with a policy, it’s to see whether there’s a legal basis to defend it,” he says.

In addition to protecting the executive branch as an institution regardless of who is in power, as Garland emphasized in his testimony, the Department also tends to operate under the assumption that the best way to address controversial policy is to change it through Congress or agency action, rather than declaring it unlawful in court, says Ian Gershengorn, the former acting solicitor general of the U.S. under former President Barack Obama. “The Justice Department doesn’t want to foreclose a future president from being able to enact a particular policy,” he says.

Take the DOJ’s defense of religious exemptions to anti-LGBTQ discrimination laws. Title IX, the law banning discrimination on the basis of sex in education, includes an exemption for religious beliefs. The job of the DOJ is to defend the law as it stands. And as journalist Mark Joseph Stern recently argued in Slate, in defending Title IX as it is written, the DOJ may be trying “to prevent a Christian organization from taking over the defense and mounting extreme arguments that could lead to a devastating subversion of civil rights law.” In a possible acknowledgment to the backlash from LGBTQ advocates, the DOJ amended it’s June 8 filing a day later, removing the word “vigorously” and making it clear the Department of Education’s review of the policy was ongoing.

Past DOJ decisions have clashed with their Administration’s values before, says Gershengorn. Under Obama, the DOJ defended the constitutionality of Don’t Ask Don’t Tell, despite the fact that “Obama hated it and said he thought it was a bad policy,” he says. There have been times where the DOJ has declined to enforce a law, such as in 2011 when the Obama-era DOJ announced it would stop defending the Defense of Marriage Act’s ban on same-sex marriage because it felt the ban was unconstitutional. But those instances are extremely rare.

‘They got that wrong’

To critics, Garland’s defense of certain Trump-era positions have been disappointing for a variety of reasons. While acknowledging the role the DOJ must play in upholding the law, several former federal prosecutors told TIME they felt Garland went too far in his defense of Trump in Carroll’s defamation lawsuit, which she filed in 2019 after he said she was lying about him sexually assaulting her in the 1990s. While the DOJ said in a June 7 filing that Trump’s comments were “crude and disrespectful,” it argued that they were made within the scope of his office, giving him protection under the Westfall Act that allows the government to step in if federal employees are sued.

“You look at what the President said, the context in which he said it, the facts of the E. Jean Carroll case and I think you can come to a different conclusion about whether what he said was in the scope of his employment,” says Rodgers. “I personally think they got that wrong.” Nevertheless, she says, the move still wasn’t about protecting Trump personally. It was about protecting the office of the presidency so the DOJ’s position can’t be used against the executive branch down the line if someone else tries to sue the president for comments he or she made in office.

The DOJ’s decision to fight the release of the entirety of the OLC’s memo on not charging Trump with obstruction of justice likely comes from a similar position, much to the disappointment of progressives who have called for more transparency from the Department. Democratic Sen. Dick Durbin and Sheldon Whitehouse had written a letter to Garland on May 14 urging him to release the memo in full.

Noah Bookbinder, a former attorney in the DOJ’s Public Integrity Section and the president of the Center For Responsibility and Ethics in Washington (CREW), which filed the suit requesting the OLC’s full memo be released, tells TIME he thinks the DOJ is fighting the release because they don’t want people “rooting around” in department materials the future. “I don’t think it comes from a nefarious place, but I think it’s the wrong decision,” he says. The politicization of the DOJ in the Trump years was undeniably dangerous, he argues, and a better approach under Biden would be to “open things up, have transparency about what happened, change course and show you’re not going to do that kind of thing again.”

Garland has separately faced criticism in recent days for not revealing sooner that under Trump, the Department had subpoenaed records of journalists and members of Congress, instead allowing the news to come out when the DOJ declined to renew gag orders to make the subpoenas confidential.

After the outcry, Garland announced on Monday that the DOJ will tighten rules around when legislators’ information can be subpoenaed, and directed the Inspector General to conduct an independent investigation. “As I stated during my confirmation hearing, political or other improper considerations must play no role in any investigative or prosecutorial decisions,” Garland said in a statement on Monday. “Consistent with our commitment to the rule of law, we must ensure that full weight is accorded to separation-of-powers concerns moving forward.”

It’s a difficult line for Garland to walk. He’s tasked with restoring faith in the department and its nonpartisan reputation, while meeting calls for greater transparency and accountability. And if the DOJ swings too hard in the opposite direction and starts sharply scrutinizing everything that transpired under Trump, that could also dangerously politicize the office even further, Rodgers says.

She believes Garland’s is succeeding in steering the Department in a better direction. “You may or may not agree with what the DOJ is doing in any particular case, but I think if you can have confidence that it’s working in the right way,” says Rodgers. “That’s at least a huge step back towards where we need to be.”

Others, however, argue that he’s at risk of overcorrecting. “He is like the Dad who coaches his own child in Little League and benches him even though he is the best player,” says McQuade. “He may be successful in proving how fair he is, but if his team loses the game, no one is happy.” 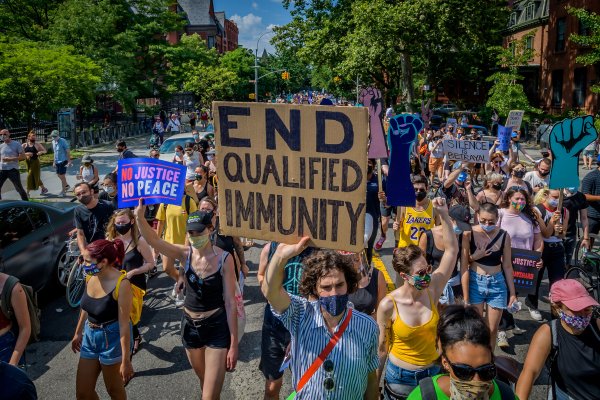 The Debate Over Qualified Immunity Is at the Heart of Police Reform. Here’s What to Know
Next Up: Editor's Pick