As Black Americans prepared to travel in Jim Crow-era America, they might have consulted the Green Book—an extensive travel guide of hotels, restaurants, gas stations and more that welcomed Black customers. The guide, which published annually from the 1930s into the 1960s, became a crucial tool for Black Americans navigating racist and segregationist laws.

Today, following the Green Book’s model, the National Black Justice Coalition (NBJC)—a civil rights organization dedicated to serving the Black LGBTQ community—has launched a web-based app called “the Lavender Book,” which lists businesses and facilities across the U.S. that are safe and inclusive spaces for LGBTQ people of color.

The crowdsourced app launched in partnership with the nonprofit Out In Tech—which supports LGBTQ people in the tech industry—and allows users to search for queer-friendly businesses as they plan travel or events. Users can curate their searches by inclusive attributes: whether the venue offers gender-neutral restrooms, for example, or is Black owned, queer owned, or trans owned. Users can also submit and review businesses they’ve visited. (The app is moderated by NBJC, so all submissions are reviewed before being listed.)

“There are unique challenges that those of us with intersectional identities face,” David Johns, the NBJC’s executive director, tells TIME. “I, as a Black same-gender loving man, know that there are many places in this world that are not accessible to me should I desire to show up with my partner, or in ways that might otherwise invite people to speculate about my sexual identity.”

The Lavender Book launches amid a slew of anti-trans legislation being introduced across the U.S.—over 250 anti-LGBTQ bills have been introduced into state legislatures this year, according to the advocacy group Human Rights Campaign (HRC), and at least eight have been signed into law—many of which impact trans youth. 2021 is also on track to be the deadliest year on record for Black trans women; at least 14 Black trans women have been murdered since January alone; at least 44 transgender or gender non-confirming people were killed in 2020, per HRC.

“[There] are still states where people can be denied services on the basis of perceived sexual orientation and gender identity,” said Andrew Lowenthal, the executive director of Out In Tech. “There are also unfriendly, unwelcoming, and even hostile environments specifically for BIPOC members of our community. By leveraging the power of technology and crowdsourcing for social change, we hope to help BIPOC LGBTQ folks find safe and inclusive spaces at the recommendation of their peers.”

Johns says they hope the Lavender Book can help LGBTQ people of color travel more safely, reduce the amount of time they have to spend leaning on networks, and incentivize business owners to make their space as inclusive as possible. The Lavender Book also doesn’t just have to be used for travel—it can also help people find friendly and inclusive local businesses in their own cities and neighborhoods.

“The reality is that most Black LGBTQIA+ folks, we live in the South,” Johns says. “We live in states where it is still legal to discriminate against us based on actual or perceived identity orientation or expression.”

“We spend a considerable amount of time and energy trying to identify places where the likelihood of us experiencing violence or trauma or discrimination is lessened,” he continues. “The idea of using technology to reduce the labor that our community invests, and increase access to safe spaces, has always been something that we’ve wanted to do.” 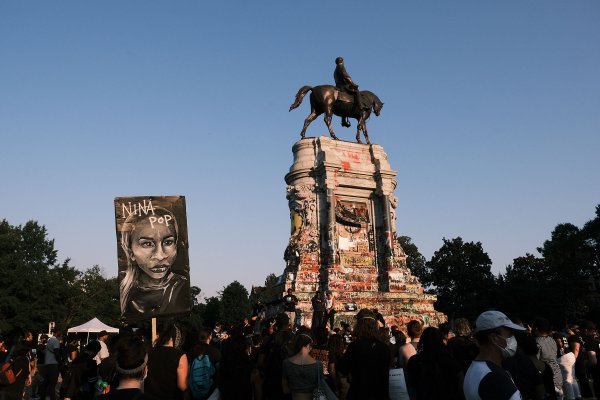 Protesters Demanded Justice for Nina Pop. A Year After Her Death, What Happened to Everyone Saying Black Trans Lives Matter?
Next Up: Editor's Pick