President Biden delivers brief remarks on infrastructure to journalists after arriving on the Ellipse by Marine One en route to the White House on April 5.
Michael Reynolds—POOL/EPA-EFE/Shutterstock
By Alana Abramson and Brian Bennett

President Joe Biden was huddling with aides in the Oval Office in late April, preparing for a Zoom tour of Proterra, an electric bus and battery plant in Greenville, South Carolina. The company does the kind of eco-friendly manufacturing that Biden hopes will balloon if Congress passes his $2 trillion infrastructure proposal, which includes nearly $80 billion in federal investment in these types of clean energy jobs. Biden was blunt about the larger goal. “This is how we show people that the government has a role to play,” he said before getting on the call.

That vision of government has been at the heart of Biden’s first 100 days in office. He has pumped nearly $1.9 trillion into the economy, more than any other President at this point in a first term, through a stimulus bill that offers everything from unemployment insurance and rental assistance to vaccine distribution and healthcare subsidies. Biden has laid out plans for another $2 trillion to create millions of jobs by fixing the country’s sagging infrastructure, and invest in clean energy jobs like the ones at Proterra, and plans to lay out an estimated $1.8 trillion this week focusing on education and paid leave. In total, Biden’s multi-trillion dollar spending splurge would be the biggest federal investment in the middle and lower classes since President Lyndon B. Johnson’s Great Society, with the potential to alter the country for generations.

It’s a deeply progressive agenda put forth by a man who was a middle-of-the-road Democrat for most of his career. “I really kind of thought he would be much more of a traditionalist,” says Representative Jim Clyburn, the House Majority Whip, “though I am very pleased and excited.” So how is the one-time deficit hawk who supported Ronald Reagan’s tax cuts now drawing comparisons to presidents like Franklin Delano Roosevelt and Lyndon B. Johnson?

Biden is making a $5 trillion bet. The president has calculated, aides and allies say, that the twin shocks of the last four years—President Donald Trump’s gutting of the federal government and the historic pandemic—have created a once-in a career opportunity. By embracing a pre-Reagan vision of expansive government that delivers for a hurting nation, he hopes to capitalize on the post-Trump political moment. “People just see a much, much bigger role for the government,” says Celinda Lake, a Democratic pollster who advised Biden’s campaign. “It’s comparable to the Great Depression and World War II, where there were massive emergencies that affected everyone, and people were very, very responsive to a major [government] role.”

So far, Biden’s bet seems to be paying off. His approval rating has hovered in the mid-50s, according to Gallup, which trails many of his predecessors but is a strong mark in this polarized political climate. (Trump never cracked 50%.) Some 64% approve of his coronavirus response, and 46% of Americans say the country is headed in the right direction, according to a Monmouth University poll released April 14, the highest number in eight years.

But even Biden’s allies acknowledge that goodwill is tenuous. The country remains deeply divided. Biden has a narrow, fragile majority in Congress, and holding together progressives and moderates in his party is already proving hard. Republicans are eager to make it harder, seizing on crises like the surge of migrant children at the southern border, to attack him and dampen his approval ratings. With midterms 18 months away, and the Democrats facing challenges on multiple fronts, Biden has little time to get his ambitious agenda enacted.

A new President’s first official Oval Office meeting is always a milestone, and Biden’s decision to invite 10 Republican Senators to his first one, on Feb. 1, was particularly noteworthy. The Democrats had recently won control of the Senate through two run-off elections in Georgia, so Biden didn’t need GOP support to advance his $1.9 trillion COVID-19 relief package. But over the course of the two-hour meeting, Biden seemed to indicate he might tinker with his spending plan in favor of the kind of bipartisan compromise he had talked about on the campaign trail.

Instead, Biden cast aside the Republicans’ $600 billion counter and forced through his bill on a party-line vote six weeks later. Biden has offered a host of reasons for going it alone. He told aides he felt the $600 billion GOP counterproposal wasn’t serious. He has touted estimates that part of his bill could cut child poverty in half. And he said he couldn’t risk the trap he’d seen unfold as Vice President in 2009 and 2010, when he watched drawn-out negotiations with Republicans fizzle, delaying Democrats’ legislative priorities. “Bipartisanship is a worthy outcome,” says Scott Mulhauser, a former aide to Biden in the Senate, “but it is not the goal.”

Through polling and focus groups, as well as his time on the campaign trail, Biden concluded that what voters wanted, above all else, was for the government to deliver in ways it hasn’t during the neoliberal era. In 2015, 68% of Democrats and 23% of Republicans said the government should do more to solve problems, according to data from the Pew Research Center. By September 2020—amid the throes of a worldwide pandemic and economic downturn exacerbating income inequality—those numbers had increased to 82% of Democrats and 32% of Republicans.

The decision set the course of Biden’s presidency, establishing from the start that his time in the Oval Office would deviate from the incrementalism of his Senate career. Former Senator Ted Kaufman, a longtime Biden confidante, says that Biden’s moderate persona in the Senate was the result of the institution he was serving. He needed to get things done for his constituents, Kaufman argues, which required compromise. “When you’re a Senator, you have one ability to make change. When you’re President you have a totally different ability to make change,” Kaufman says. “The reason why senators run for President is not to ride on Air Force One or live in the White House; it’s because you can step up and move beyond incremental lawmaking.”

It’s also true that the country has changed. For much of Biden’s Senate career, politics increasingly demanded a commitment to minimizing the government’s role and limiting spending, at least in principle. “During the Reagan and Clinton years, Biden understood the country had turned right and the Democrats had to be more restrained in their objectives,” says Timothy Naftali, a former director of the federal Richard Nixon Presidential Library and a historian at New York University. “Biden has a sense that this is a period when it’s possible to get more from the Democratic agenda.”

It may be. Republicans have blasted the size of the COVID-19 relief bill, arguing it is full of wasteful spending unrelated to the pandemic, and are making similar claims about the infrastructure push. But a month after its passage, 67% of Americans approved of the American Rescue Plan, according to an April 15th survey from the Pew Research Center. And 68% support the American Jobs Plan, while just 29% oppose it, according to an April 26th Monmouth University poll. Overall Biden scores high marks on the policies he is pushing, with the exception of immigration, polling shows.

If Biden’s first 100 days were all about getting shots in arms and cash into people’s wallets, his next 100 will be more complicated. To revamp the U.S. economy and reaffirm the positive role of government, he will need to pass some version of both the $2 trillion American Jobs Plan and the estimated $1.8 trillion American Families Plan by the end of the year. It won’t be easy. Biden has pledged to work across the aisle, inviting leading Republican lawmakers on this issue for Oval Office meetings and laying out his pitch in his first address to Congress on April 28. But fights among Democrats may prove just as challenging. Already, Biden’s party is fighting over whether to include a tax break that mostly benefits northeastern states, just one of several friction points he’ll have to grease to get a bill passed on party lines. His aides acknowledge passing these bills will be a slog, but profess confidence both publicly and privately that both will pass in some form.

While he inherited a crisis, Biden’s also been helped by circumstance. The Trump Administration ordered the bulk of the vaccine shots Biden inherited and distributed. “Biden ascended to the White House at the perfect time,” says Republican donor Dan Eberhart, “Not one, but two vaccines were being rolled out and the economy was tightly wound up with pent-up demand.” He’s also benefited from an opposition party with few unifying principles beyond fealty to an unpopular former president. “He’s been helped by the Republican inability to coalesce around a single message,” says GOP pollster Frank Luntz. They’re “too busy arguing over Dr. Seuss,” says Luntz, referring to Republicans’ outrage over the children’s author being condemned for offensive illustrations.

The big question for Biden’s term is whether legislative success—if he can achieve it—can help him defy history. A President’s party generally loses seats in the midterm elections, but Biden’s allies claim his popularity is having trickle-down effects. According to the April 15 Pew Research Survey, half of Americans approve of the job Congressional Democratic leaders are doing, while just 32% approve of Republican leaders. Some Democrats are cautiously optimistic that, if Biden’s big-spending plans become law, their popularity will enable them to reverse the mid-term losing trend.

That’s the hope at the White House, anyway. For now, Biden’s trying to make that argument wherever he can. As he told an executive at Proterra, the South Carolina company building electric school buses and city buses, after watching their electric battery manufacturing process, “We have a lot of catching up to do, but we’re going to be in a position where we ought to own the future here.” For Biden, success may come down to how much he and the American public are willing to pay for it. 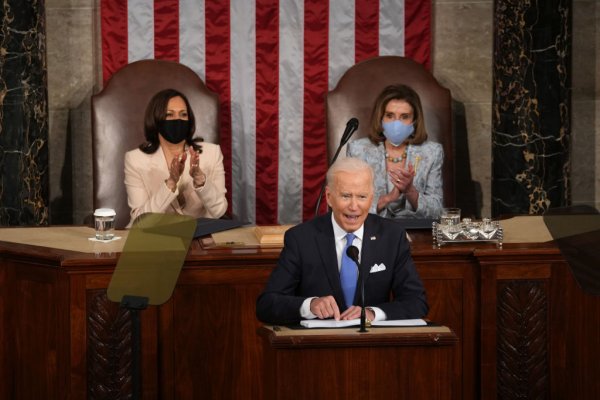