By Josiah Bates and Melissa Chan

The teenage witness who took the famous video of George Floyd being crushed into the ground by Minneapolis police officer Derek Chauvin described Floyd as “a man terrified, scared, begging for his life” and testified Tuesday that she remains haunted by the fact she did not do more for him.

Darnella Frazier had a brief but emotional turn on the stand in the second day of testimony in Chauvin’s trial, weeping at times and her voice barely above a whisper as she recounted the events of May 25, 2020. Frazier, who was 17 when the incident took place, was not shown on camera, and only her voice was heard during her testimony.

She told the prosecutor that on May 25, she was walking to the Cup Foods grocery store with her 9-year-old cousin to get some snacks. Outside the store, she saw Floyd on the ground with Chauvin on top of him and told her cousin to go inside the store so that the younger child would not see what was happening.

Read more: America is on Trial as Derek Chauvin Faces Justice in the Death of George Floyd

“I heard George Floyd saying I can’t breathe, please get off of me. I can’t breathe. He cried for his mom. He was in pain. It seemed like he knew it was over for him. He was terrified. He was suffering,” Frazier told prosecutor Jerry Blackwell.

Blackwell asked her whether or not other civilian bystanders that were with her acted violently or behaved like a mob; Frazier replied no, adding that the only violence she saw came from the police.

According to Frazier, a firefighter arrived at the scene and asked Chauvin to check Floyd’s pulse, but he didn’t. Fraizer continued and said that she felt threatened by Chauvin and the other officers at the scene.

When asked how Chauvin reacted to the crowd yelling at him, she said he had a cold and heartless look. “He just stared at us, looked at us. He had like this cold look, heartless,” Frazier said, adding that he “rubbed me the wrong way.”

It wasn’t until a paramedic arrived and told Chauvin to get off of Floyd’s neck that he actually moved, said Frazier, the fourth witness called to testify in the trial. Chauvin, who is no longer on the police force, has pleaded not guilty to charges of manslaughter, 2nd degree murder, and 3rd degree murder.

Later in her testimony, when asked how witnessing the incident had impacted her life, Frazier said she couldn’t help but think how her own father, brothers, uncles or other loved ones might have ended up in the same situation. “I look at how that could have been one of them,” she said. Sometimes, Frazier said, she lies awake at night apologizing to Floyd for not doing more to help him.

Few have missed or failed to describe the Chauvin trial as a critical moment and an inflection point in American history. If Chauvin is convicted, the trial will make history in a city whose police department has a long history of racist incidents and a long history of police officers not being held accountable. If he’s acquitted, that would make it difficult, if not impossible, to gain convictions of any of the other three officers charged in the case.

Chauvin’s defense team has said that Chauvin’s actions were necessary to control Floyd, who was taller and heavier than the police officer. In his opening statements, defense attorney Eric Nelson urged jurors to consider the “totality of the circumstances” during the fatal encounter, saying that the incident began when Floyd paid for cigarettes with counterfeit money and that a 911 caller thought Floyd was drunk. Floyd put drugs in his mouth before his arrest, Nelson told the jury, adding: “Derek Chauvin did exactly as he was trained to do.”

Prosecutors say the use of force was excessive and that Chauvin betrayed his badge when he deliberately remained on Floyd’s neck even though the 46-year-old handcuffed man on the ground verbalized 27 times that he couldn’t breathe.

The original version of this story misstated the wording of a lawyer’s question. He asked Darnella Frazier how witnessing Floyd’s death had affected her life, not how publicity over the video had changed her life. 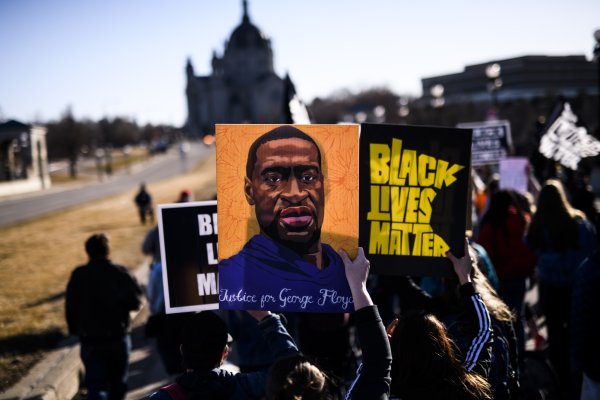 Derek Chauvin Goes on Trial in George Floyd Death
Next Up: Editor's Pick