How Social Lives Are Changing During the U.S. Vaccine Rollout

Andrea Norred wasn’t too surprised to learn that many of her friends, as well as her 18-year-old son, have decided not to get vaccinated against COVID-19. She lives in Santa Cruz, Calif., a coastal city with an above-average rate of vaccine skepticism. Norred attributes that phenomenon to the area’s “hippie, free love” vibe; in many such communities, faith in natural or holistic medicine correlates with mistrust of vaccines, quite possibly to dangerous effects.

Norred, 42, tries to be accepting of that choice, but it’s difficult. Herd immunity is particularly important for Norred; she has an immune deficiency that both puts her at high risk of severe COVID-19 and reduces vaccines’ effectiveness in her body. She has been hunkered down in isolation for the last year and says she won’t feel safe spending time around unvaccinated people while COVID-19 continues to spread. So for Norred, each unvaccinated friend is, at least temporarily, a friend lost.

“I don’t know that things will ever be the same for me, socially, as long as COVID is around,” she says. The situation with her son is particularly painful. All she wants to do is give him a hug, but she doesn’t know when that will be possible again.

Norred’s situation is particularly high stakes, but she’s not alone. For a year, the pandemic has uprooted countless social lives, shrinking them to fit inside our devices. For some, vaccination is starting to change that. Fully vaccinated people now have the CDC’s stamp of approval to hang out inside and maskless with a few vaccinated friends, or to visit with unvaccinated-but-healthy loved ones, one household at a time.

But as of March 23, only about 13.5% of people in the U.S. were fully vaccinated. And this semi-protected phase is fraught. With some people vaccinated but most not—by choice or otherwise—relationships of all kinds are under strain. Some people, like Norred, are forced to choose between safety and social support; others are developing vaccine envy as they watch people around them get immunized; and still others are shaping their social events around attendees’ vaccination statuses.

The result is a social code in flux. COVID-19 vaccines are the key to someday returning to a version of our pre-pandemic lives. But during the strange limbo of vaccine rollout, they are causing a whole new set of social dilemmas.

Tom Zohar, 36, didn’t fully appreciate how many of his friends were educators until he watched them get vaccinated before him, one by one. “Every time I see anyone get vaccinated, I get really happy,” says Zohar, who lives in California and works in tech support. “But it is kind of this feeling of, ‘What about me? When do I get it? When is it my turn?'” (Zohar has since received his first dose.)

As more people get vaccinated, allowing them to take small steps toward normality, it’s only natural for the unprotected to feel impatient, even left out. In a March TIME/Harris Poll survey, about 60% of respondents listed a desire to see friends and family again as a motivator for getting vaccinated.

After months of separation, it’s only human to be eager to reunite with loved ones. And, more and more, people are basing their social calendars around their friends and families’ vaccination statuses. For those who aren’t vaccinated, FOMO is increasingly a motivator for trying to get a shot.

Take weddings, for example. In an informal social media poll conducted in March by David’s Bridal, almost 20% of engaged couples said they will make their weddings vaccine-mandatory for guests. In a similar poll conducted in December 2020 by bridal brand Birdy Grey, about 35% said they planned to do so.

Sukhmanii Kahlon, a 28-year-old clinical research coordinator and medical student living in Seattle, says she and her doctor fiancé knew right away they’d make their wedding vaccine-mandatory, after postponing it from June 2020 to 2022. The couple will ask each guest to include their vaccination status with their RSVP, she says.

“Being medical professionals, we have to do everything we can to keep everyone safe,” Kahlon says. She’s realistic about the fact that such a policy could ruffle feathers—she has a few friends and relatives who have chosen not to get vaccinated—but she views it as non-negotiable. “I am sure it will shorten the guest list,” Kahlon says, “but it will also ensure a safer wedding for everyone attending.”

Dating apps have also tracked major increases in the number of people mentioning the word “vaccine” in their profiles—a sign that many singles are choosing potential partners based at least in part on their immunity status. That’s a logical enough choice, since vaccinated people can safely meet in person and without masks, but it’s also throwing a wrench in the typical, surface-level flirting that takes place on these apps.

Natalie, a 26-year-old living in Ohio who asked to be identified by first name only for privacy reasons, discovered that firsthand when she recently logged into the dating app Coffee Meets Bagel. A pop-up message filled her screen, asking her to disclose whether she had been vaccinated against COVID-19. (As of mid-March, she’d gotten one dose and was awaiting her second.) While she was surprised to see the app asking for that information, Natalie says she probably wouldn’t date anyone unvaccinated.

Natalie has been cautious throughout the pandemic. She’s desperate to visit her father, who is vaccinated, but is waiting to make the trip, since her stepmother isn’t vaccinated and she hasn’t gotten her own second dose. Compared to that sacrifice, she says, it’s an easy choice to limit her dating pool to vaccinated people.

“We’re either just going to keep talking back and forth on [the app] until you get vaccinated, or I’m just going to say, ‘See ya,'” Natalie says with a laugh.

Not everyone is on board with that trend. Christopher Eithun, who is 31 and lives in Wisconsin, says he finds it “off-putting” when someone lists their vaccination status in a dating profile. He finds it tonally odd, and says it feels like another hoop to jump through on the way to finding love. “There are enough hurdles as it is,” he says.

Eithun says he’ll get his shots once he’s eligible. In the meantime, though, he’s found it frustrating to be penalized for something out of his control. “Some people don’t have access to them,” he says. It would be one thing to implement a vaccine-mandatory policy once COVID-19 shots are as prevalent as flu shots, Eithun says, but he finds it deflating to do so now, when even most people who want to be vaccinated aren’t.

Access isn’t always the problem, though. As of February 2021, about 30% of Americans said they probably or definitely would not get a COVID-19 vaccine, according to Pew Research Center. In many cases, that vaccine hesitancy leaves their relatives and friends with a difficult choice to make.

Zohar, the 36-year-old from California, is grappling with that situation right now, after his father announced that he did not intend to get the shot. “If he chooses not to get vaccinated, I don’t think I’m going to see him unless things improve drastically, to the point that we don’t really have to worry about [COVID-19] anymore,” Zohar says. “I don’t know what’s going to happen in the future.”

Given her immune deficiency, and the number of her friends who are opposed to the shot, Norred is in an even more precarious position. She says she feels helpless as she watches life inch back toward normal for other people, while she remains quarantined inside with her two cats. “Everyone’s going to get put back together and I’m going to be sitting here, haggard in my cave,” she says light-heartedly.

She grows more serious as she considers the fact that she might have to make new, vaccinated friends, just to regain a social circle. “We’re all just trying to get through each day,” Norred says. “For me, personally, that means moving forward in the world as safely as possible, and having people around me that are vaccinated.”

Her dilemma likely sounds familiar to many people, even those without the added challenge of a chronic health condition. In a March poll from Axios/Ipsos, about 30% of respondents said they won’t return to in-person gatherings until their whole social circle is vaccinated. But what if key members of one’s circle never get vaccinated? There’s no roadmap for what happens then.

“People are looking at vaccination from a standpoint of, ‘It protects me,’” Norred says, but some don’t seem to realize that their choices also affect others. “It’s not over for anyone,” she says, “until it’s over for everyone.” 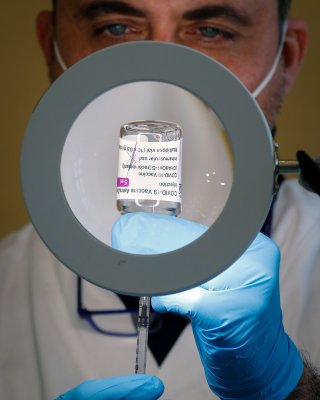 Vaccine Safety Board Chides AstraZeneca for 'Outdated' Data
Next Up: Editor's Pick