A Pro-Trump Mob Stormed the Halls of Congress. Photographs From Inside the Chaos at the Capitol

A mob of pro-Trump extremists breach the Capitol during a joint session of Congress to certify the 2020 election results in Washington, on Jan. 6.
Victor J. Blue—Bloomberg/Getty Images
By Vera Bergengruen and TIME Photo Department

A mob whipped up by the President stormed police lines, smashed windows and broke into the U.S. Capitol on Jan. 6 in an attempt to block lawmakers from certifying President-elect Joe Biden’s electoral victory. The violent scene, which called to mind images of coups in foreign lands, was a culmination of two months of “Stop the Steal” rallies, fueled by Donald Trump’s baseless allegations that widespread voter fraud had cost him the election. The President has repeatedly incited his supporters to challenge the peaceful transfer of power, the essential marker of democracy.

Two hours before the assault on the Capitol, Trump had vowed that he would “never concede,” and urged them to pressure Republican lawmakers “to take back our country.” When he finished, a crowd chanting, “Storm the Capitol!” proceeded to the iconic building, overwhelmed police and flooded inside. Inside the House Chamber, police officers shoved furniture to barricade the doors as Vice President Mike Pence and lawmakers scrambled to evacuate. In the Senate, intruders dressed in everything from full body armor to a horned Viking cap posed for photos at the rostrum, fists raised. A red MAGA hat was planted on the head of a bronze statue of former President Gerald Ford in the Rotunda and a Trump flag placed in his hand. Shots were heard and a woman reported killed. As it all unfolded, control of the upper chamber moved from the Republican Party to the Democratic Party as, 600 miles to the south, civil servants and citizen volunteers continued to faithfully tally ballots.

—Vera Bergengruen, with reporting by Leslie Dickstein and Julia Zorthian 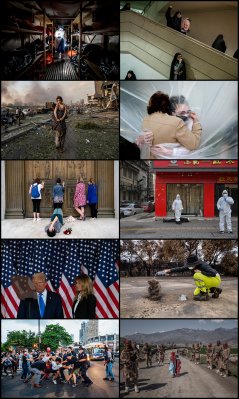