The post-election period got off to a raucous start Monday when President Donald Trump fired Defense Secretary Mark Esper by tweet, a decision that tossed Pentagon leadership into tumult with just 72 days before transitioning to a new administration.

“Mark Esper has been terminated,” Trump tweeted. “I would like to thank him for his service.”

The move came just two days after Joe Biden was projected to win the 2020 Presidential election, a development Trump so far refuses to accept. The President has been complaining about Esper for months, but his abrupt ouster drew immediate concern from Democrats and Republicans alike worried what other destabilizing maneuvers Trump might make before leaving the White House in January. Washington collectively held its breath to see if Trump would fire other high-ranking officials he’s frustrated with, including FBI Director Christopher Wray, CIA Director Gina Haspel and Attorney General William Barr.

On Tuesday, the Pentagon announced the resignations of several senior officials and the promotion of three Trump loyalists—Anthony Tata, Ezra Cohen-Watnick and Kash Patel—to key roles. The most notable is Tata, a retired Army brigadier general, who is now working as the official performing the duties of the Undersecretary of Defense for Policy.

In July, the Senate Armed Services Committee abruptly cancelled a hearing on Tata’s nomination to the very same job, the Pentagon’s No. 3 position, after senators and civil rights groups raised questions about his previous false and incendiary commentary. Tata once called President Barack Obama a “terrorist leader” and claimed that Islam is “the most oppressive violent religion I know of.”

The remaining national security leadership is seen as a stabilizing force as the nation enters a period of transition from one administration to the next. Typically, the Biden team would spend weeks absorbing information on the nation’s most perplexing problems, both internal and external, before taking over on Jan. 20, 2021. It’s critical the hand-off is as seamless as possible, particularly amid a pandemic that’s created disarray across the globe.

Now, with Esper’s firing, the President has made clear he has little interest in a smooth transition. Instead, it appears Trump Administration officials may not start talking to their successors until every last effort made by their boss to stay in power through litigation is expended.

“This is purely an act of retaliation by a president thinking more about his petty grievances than about the good of the country,” said Lawrence Korb, a former assistant Secretary of Defense under President Ronald Reagan and current fellow at the Center for American Progress Action Fund. “The message it sends around the world is that Trump is going to continue his disruptive policies for the rest of his time in office.”

Rep. Adam Smith, a Democrat from Washington, who serves as chairman of the House Armed Services Committee, pointed out that periods of presidential transition leave the country exposed to unique threats. “Dismissing politically appointed national security leaders during a transition is a destabilizing move that will only embolden our adversaries and put our country at greater risk,” he said.

The U.S. is facing headwinds in virtually every corner of the globe. There’s a tense stand-off with Iran. A chilly relationship with China. Russia continues to make problems for the U.S in Europe. The Taliban shows no sign of retreat in Afghanistan. The military is still juggling the fight against terror groups across the Middle East and Africa. And tensions with North Korea continue to be unresolved.

“There is no doubt that our adversaries are already seeking vulnerabilities they can exploit in order to undermine American global leadership and national security during this transition period,” said Democratic Sen. Mark Warner from Virginia, vice chairman of the Intelligence Committee in a statement on Monday. “The transfer of power should be peaceful and fulsome in accordance with the principles that have animated our republic since its founding and the last thing that our country needs is additional upheaval in the institutions designed to protect our national security.”

Some military experts worry Russia, China, Iran, and others will be emboldened to test the United States not just in the information space, as the Pentagon calls it, but militarily and diplomatically. It’s important not to play into foreign adversaries’ narratives that the United States is immobilized by governmental dysfunction and a divided citizenry, said Anthony Cordesman, a former intelligence official at the Pentagon who now works at the Center for Strategic and International Studies.

“We need the best transition possible,” he said. “We certainly aren’t going to get it if we’re in the middle of petty in-fighting and partisan paralysis.”

Esper, who was Trump’s fourth Pentagon chief, spent the last several months of his tenure trying to thread the needle between implementing Trump’s policy objectives and maintaining long-standing American principles, such as keeping active-duty troops from quelling civil protests. The relationship became increasingly bitter this summer after Trump called him “Yesper” during a news conference—a derisive nickname that came from critics who thought Esper failed to forcefully push back against the President’s decisions.

Esper, who previously served in both the military and the government, was serving as Army Secretary when Trump chose him in July 2019. He replaced Patrick Shanahan, who resigned as Acting Defense chief after serving for six months. Esper was confirmed as Defense Secretary in July 2019.

During his 18-month stint, he went along with Trump on many controversial issues. He backed Trump when he seized billions of dollars from the military budget to build his border wall with Mexico after Congress blocked funding for the construction project. He watched as Trump meddled in the cases of several service members accused of war crimes—despite senior officers’ objections—by pardoning the accused troops before their cases had even gone to trial.

Esper’s problems with Trump started in August when he and Chairman of the Joint Chiefs General Mark Milley walked with Trump through Lafayette Park, near the White House, after more than a thousand protestors had been physically cleared out with pepper balls and rubber bullets and police officers swinging riot shields. The Administration officials walked through the park before Trump stopped in front of the parish house of St. John’s Church, which had been vandalized the night before when protestors ignited a fire in the basement. He stood for pictures and requested his aides, including Esper and Milley, to join. Esper said he didn’t know he was heading for a photo shoot, but in the eyes of many Administration critics, the two men became “props” in a photo-op—whether they were happy about it or not.

The next day, Esper held a press conference to say he would prefer not to use troops to stop the violent unrest that erupted across the nation after George Floyd, an unarmed black man, was killed by Minneapolis police. It was the first time Esper publicly broke with Trump on a policy issue, and he’s been unable to get back on Trump’s good side ever since.

In recent weeks, Esper wrote a resignation letter because he felt his tenure was close to coming to an end. “I serve the country in deference to the Constitution,” Esper wrote in the letter obtained by TIME, “so I accept your decision to replace me.”

On Monday, Trump named Christopher Miller, previously director of the National Counterterrorism Center, to become Acting Defense Secretary. Miller is an Army Special Forces who previously oversaw Special Operations policy at the Pentagon and served as a counterterrorism official at the White House National Security Council. He spent the afternoon at the Pentagon getting briefed on the pressing issues that will dominate his next 10 weeks in office—that is, if he’s able to stay in the job until the end of the administration. 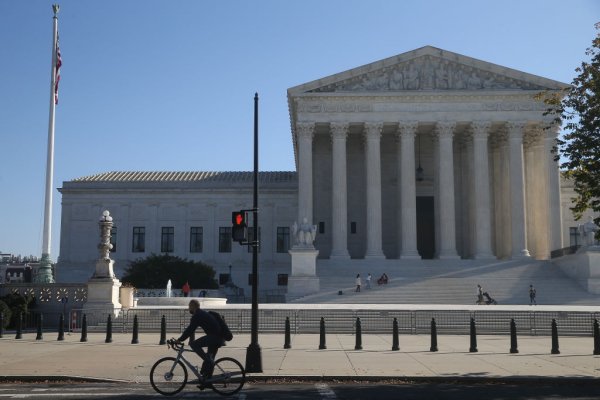 The Affordable Care Act Faces Yet Another Supreme Court Test
Next Up: Editor's Pick