Less than two weeks after North Korea showed off new intercontinental ballistic missiles in a military parade, President Donald Trump touted how his Administration has handled the relations with the nation.

That relationship has been accompanied by a number of strategic setbacks for the U.S., and for stability in East Asia.

Under Trump, North Korea has relentlessly pursued its military goal of being able to unleash a nuclear strike on the U.S. and its allies. Pyongyang is now believed to have a dozen or more nuclear warheads and an arsenal of several hundred short- and medium-range ballistic missiles capable of hitting South Korea, Japan, and U.S. military bases and territories in the region.

North Korea also has developed long-range missiles that experts say can strike every major city in the continental United States. On Oct. 10, the nation’s military rolled out a wide range of hardware, including four of the biggest intercontinental ballistic missiles (ICBMs) ever seen in North Korea. The ICBMs were hoisted atop truck-based launchers, which indicates they could be rolled into a remote area, blasted off at a moment’s notice, and strike adversaries with little warning.

The development was deeply concerning to defense analysts who say the new weapons could potentially overwhelm U.S. missile defenses, which include 44 ground-based interceptors in Alaska and California designed to shoot weapons out of the sky. “If each new North Korean ICBM can carry 3-4 warheads, we would need about 12-16 interceptors for each missile,” said Jeffrey Lewis, an analyst with the James Martin Center for Nonproliferation Studies Middlebury Institute of Strategic Studies in a tweet.

Trump did not address the new ICBMs, instead saying his personal relationship with North Korea’s leader Kim Jong Un was better than President Barack Obama’s—and that’s what has kept the nation safe. Trump added that after he was elected President in 2016, Obama informed him tensions with Pyongyang were nearing a breaking point.

The reason Obama told Trump there might be a war with North Korea was because the U.S. policy of Democrats and Republicans for the past 20 years alike was to prevent North Korea from getting nuclear weapons. The options facing Trump when he took office, were to stick with that policy, and risk war, or accept a nuclear North Korea. Trump chose the latter.

Trump also asserted Obama tried to meet with Kim but was turned down because Kim “didn’t like him.” That’s not true, however. Obama refused to sit down with Kim unless he met specific preconditions related to Pyongyang’s nuclear weapons program.

Former Vice President Joe Biden criticized Trump for meeting with Kim without preconditions, saying “he’s legitimized North Korea,” a nation known as the “Hermit Kingdom” because it’s so ostracized by most of the world. “That’s like saying we had a good relationship with Hitler before he invaded Europe,” Biden said.

The U.S. and North Korea have engaged in a detente of sorts since the spring 2018 when Trump accepted a proposal to meet Kim face to face. The President took trips to Singapore, Hanoi, and even a presidential walk across the demilitarized zone into North Korea. Yet there is more evidence that Kim has bolstered his nuclear arsenal rather than abandon his weapons programs.

It’s true, however, that Trump’s relationship with Pyongyang has improved since his first years in office when the President’s called Kim “Little Rocket Man” and openly threatened to unleash “fire and fury like the world has never seen.” North Korea hasn’t flight tested long-range missiles or conducted a nuclear test since declaring a moratorium in 2018. But, as the parade demonstrated, it hasn’t stopped the nation from expanding stockpiles. 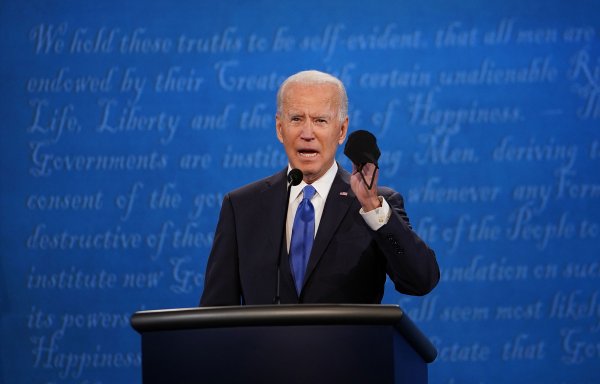