U.S. President Donald Trump speaks to reporters on his way to Marine One on the South Lawn of the White House on September 30, 2020 in Washington, D.C.
Drew Angerer—Getty Images)
By W.J. Hennigan and Vera Bergengruen

As Washington followed the rapid-fire news Friday of President Donald Trump’s COVID-19 diagnosis and his eventual hospitalization at Walter Reed Medical Center, national security and disinformation analysts watched as American adversaries sought to exploit the unfolding situation to their advantage.

Trump’s diagnosis was announced around 1 a.m. Friday morning with a tweet from his personal account. Over the following hours, the White House put out piecemeal statements that gradually became more concerning. Prior Administrations facing uncertainty at the top of America’s government have favored full briefings for the media by subject matter experts and advisors. Trump’s White House opted instead for sporadic announcements through non-traditional media channels over the course of the day which only fueled speculation.

This approach created a significant opening for misinformation by foreign adversaries and bad actors at home, analysts say. “What the White House has been sharing with us has been lacking in detail and fragmented, and whenever there is a gap in the information that’s shared there are conspiracy theories and misinformation,” says Samuel Woolley, who leads propaganda research at the Center for Media Engagement at the University of Texas at Austin. “There’s a massive credibility gap.”

This distrust was exacerbated as details emerged that Trump had gone ahead with campaign events on Thursday despite knowing that his close aide Hope Hicks had tested positive for the virus. Trump traveled to several events in New Jersey after her diagnosis, which he downplayed in a television interview. Adversaries were quick to seize on the series of conflicting messages. “The propaganda ecosystem is going into overdrive,” Woolley says. “We should expect it to cause a massive cascade of misinformation from all quarters.”

Some arms of government attempted to deploy the traditional approach to information in times of uncertainty. The Pentagon moved to reassure the public that there has been no change to U.S. armed forces’ level of alert since the President received a positive test. “The U.S. military stands ready to defend our country and interests,” Pentagon spokesman Jonathan Hoffman said in a statement. “There’s no change to the readiness or capability of our armed forces. Our national command and control structure is in no way affected by this announcement.”

But foreign adversaries have already been at work on harder to patrol fronts, like propaganda outlets and cyberspace. Last month, FBI Director Chris Wray testified to Congress that Russia has been using “proxies, state media, online journals” and other mediums to influence U.S. elections and specifically damage the Democratic nominee, former Vice President Joe Biden ahead of the 2020 election. Now, experts say, the Russians and others are using Trump’s illness to further their efforts.

RT, the Russian state-backed English language outlet, tweeted an image from a Simpsons episode in which a cartoon version of Trump appeared in a coffin, and said the picture was spreading like wildfire. The outlet also amplified fears about Trump’s opponent, running the headline “’Biden needs to be tested ASAP’: Concerns raised over Biden’s health after Trump tests positive for Covid-19,” which was picked up by other outlets including Tasnim, an Iranian government-affiliated news agency. Biden tested negative Friday, according to his campaign, and he is maintaining his schedule. But the article alleged that “Biden has worried both his supporters and critics after having prolonged coughing fits” on the campaign trail. These headlines echoed similar articles pushed by these outlets on social media about Hillary Clinton’s health during the 2016 election.

“This is highly consistent with their messaging we’ve watched over the last year,” says Clint Watts, a former FBI special agent who tracks online security threats at the Foreign Policy Research Institute. “‘Biden has dementia, he’s not well, he’s too old to take office’ – it’s the same theme, they’re just twisting it,” for the current COVID scare, Watts says.

Read more: What If Trump’s Condition Worsens? ∙ Mike Pence Steps Into the Spotlight ∙ Physician Briefing Raises More Questions Than Answers ∙ Trump’s Unique COVID-19 Treatment ∙ White House’s Silence Worries Diplomats ∙ How Trump’s Diagnosis Could Change the Campaign ∙ Aides Wonder If More Could Have Been Done to Protect Trump ∙ What to Know About Regeneron ∙ Where Trump Has Been Since Monday ∙ At 74, President Trump Is at Higher Risk of COVID-19 Complications ∙

Beijing is also leveraging the news to its advantage. Says Watts: “We’re obsessed with our own election, but China for example will go around the world saying ‘They’re a mess, their own president has COVID, and they didn’t even try to contain it.'”

Indeed, a top official with China’s state news agency, Hu Xijin, already publicly weighed in on Trump’s diagnosis. “President Trump and the First Lady have paid the price for his gamble to play down the COVID-19. It will impose a negative impact on the image of Trump and the U.S., and may also negatively affect his reelection.”

Some military experts worry Russia, China, Iran, and others will be emboldened to test the United States not just in the information space, as the Pentagon calls it, but militarily and diplomatically, says Retired U.S. Army Lieutenant General Mark Hertling. In April when the number of U.S. COVID cases initially spiked, the U.S. saw an increase in information warfare, says Hertling. Now, “Many will use information and disinformation to continue to paint the U.S. and the U.S. government as a failing state, dealing with governmental dysfunction and a divided citizenry,” he said. Hertling worries adversaries also may be tempted to pressure America’s resolve in hotspots overseas as well. 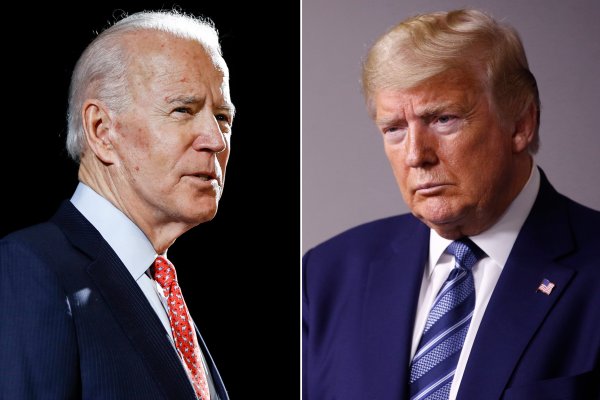 How Trump's COVID-19 Diagnosis Could Alter the Election
Next Up: Editor's Pick