President Trump Was Asked to Condemn White Supremacists. He Gave Them 'a Huge Win' Instead

By Vera Bergengruen and Lissandra Villa

When asked to directly disavow white supremacists on Tuesday night at the first presidential debate, President Donald Trump—yet again—did not do so. Instead, his dodging provoked a flurry of online celebration by far-right extremists who saw it as implicit approval and pledged their allegiance to him.

In a chaotic exchange, the moderator, Fox News’ Chris Wallace, asked Trump if he was willing to condemn white supremacists and militia groups, like the Proud Boys, and implore them not to add to volatility in cities that have had racial justice protests.

Just minutes after his answer at the debate, members of the Proud Boys and similar groups celebrated his response, flooding their social media channels with comments like “Standing by, sir.”

Read more: ‘We Are Being Eaten From Within.’ Why America Is Losing the Battle Against White Nationalist Terrorism

“The comments by the president were a huge win for the Proud Boys, which we should remember is a group who views its mission as literally ‘fighting Antifa’ as part of its ’defense of the West,’” Megan Squire, a computer science professor at Elon University who tracks online extremism, tells TIME. “They’ve now been blessed by the President on the world stage and the data shows they are extremely excited by this.”

Squire adds that her software monitors about a dozen Proud Boys channels on Telegram, and saw them become “very energized” after Trump’s comments at the debate, posting a flood of messages and new memes. “They’re even debating whether to go ‘back to Portland,’ and how to proceed,” she says.

Trump’s comments come after a summer in which the country has seen countless massive racial justice protests in the wake of George Floyd’s death in Minnesota in May. The last week has seen reignited anger after no officers were charged with Breonna Taylor’s shooting death by Lousiville police.

In his question, Wallace mentioned Kenosha, Wis., and Portland specifically as cities where far-right agitators have intermingled with protesters to cause chaos. In Kenosha, two protesters were killed in a deadly shooting, and Kyle Rittenhouse, a 17-year-old who was shown to be a Trump supporter, was charged with their deaths. In Portland, another man, who was reportedly affiliated with a right wing group, died after he was shot when tensions escalated between protesters as a caravan of Trump supporters made its way through the city.

The Trump Administration has come under fire for repeatedly downplaying the threat of white nationalist violence and inflating the threat posed by left-wing agitators—including by whistleblowers from inside the Department of Homeland Security. In the early days of Trump’s presidency, his administration gutted the DHS office that focused on violent extremism in the U.S. and pulled funding for grants that were meant to go to organizations countering neo-Nazis, white nationalists, far-right militants and other similar groups.

Anti-white supremacy activists online were quick to blast Trump over the comments. “It’s astonishing that, when asked a simple question, will you condemn white supremacists, @POTUS responded – “The Proud Boys should stand back and stand by.” Trying to determine if this was an answer or an admission. @POTUS owes America an apology or an explanation. Now,” said Jonathan Greenblatt, CEO of the Anti-Defamation League, in a tweet.

“People who work in monitoring and de-radicalization and otherwise studying white power groups are sounding red alerts and sending emergency signals about increasing violence from now through the election, and after, regardless of winner,” Kathleen Belew, a historian and expert on the white power movement, warned on Twitter. “A green light like “stand back and standby” is catastrophic.”

It’s also just the latest in a string of comments Trump has made in recent years refusing to denounce white supremacy. In the wake of the Charlottesville riots in 2017, in which white supremacists held a “Unite the Right” rally, Trump said there was “blame on both sides.”

Former Vice President Joe Biden went on to point out that FBI Director Christopher Wray has warned that white supremacy poses a grave threat to the country. On Sept. 17, Wray testified that 2019 was the deadliest year for domestic extremist violence since the Oklahoma City bombing in 1995. “The top threat we face from domestic violent extremists stems from those we identify as racially motivated violent extremists,” he told Congress, adding that the greatest risk was from “lone actors radicalized online who look to attack soft targets with easily accessible weapons.”

On their social media channels including Telegram, it was clear the Proud Boys quickly took Trump’s comments as validation, even fashioning his comments into a logo. 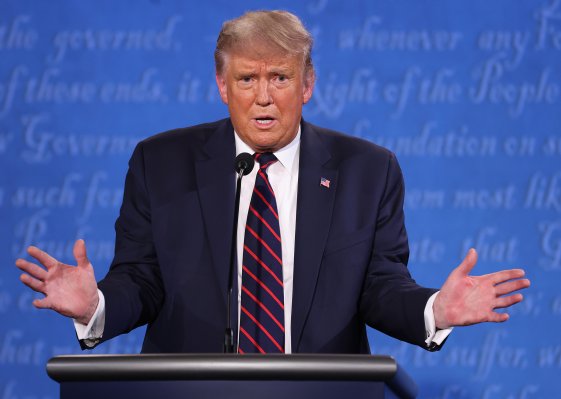 Trump Repeatedly Attacked Mail-In Voting During the Debate. There's No Evidence Behind His Claim
Next Up: Editor's Pick