'It Will Have Effects for Months and Years.' From Jury Duty to Trials, Coronavirus Is Wreaking Havoc on Courts

A Supreme Court police officer walks up the steps at the U.S. Supreme Court on March 16, 2020 in Washington, DC.
Photo by Drew Angerer—Getty Images
By Melissa Chan

When Joanna Lin appeared for jury duty in New York City on March 12, she noticed the other 180 prospective jurors in the Manhattan waiting room were trying to avoid one another, choosing seats as far apart as possible. Some wore masks, and just about everyone, including the court clerk, was discussing the coronavirus.

“After all these other things are canceled,” Lin, 34, recalls thinking, “there’s still jury duty.”

The next day, that changed. New York and several other courts across the country had suspended jury selection and postponed new criminal and civil trials to try to stem the spread of the virus. On Monday, the U.S. Supreme Court announced it was postponing upcoming oral arguments for the first time in more than 100 years; the last time it did so was in 1918 in response to the Spanish flu epidemic.

Jury duty cancellations no doubt are being met with relief by many prospective jurors who feared having to sit in a room teeming with strangers for hours at a time when health officials were urging people to keep their distance from each other.

“You’re in close quarters,” says Lin. “If one person gets sick, you’re screwed.”

And while closing courtrooms and halting jury duty makes sense for public health reasons, some legal experts warn the delays could create an overwhelming backlog of cases and have legal ramifications, since defendants are guaranteed a speedy and fair trial under the Constitution.

“I’ve never heard of anything like this,” says Raffi Melkonian, an appellate lawyer in Houston. “This truly is unprecedented. It will have effects for months and years after we are back to normal.”

With the fast-moving coronavirus already affecting thousands of people in the United States, federal and state courts throughout most of the nation have implemented new measures—from restricting who can enter the building to delaying jury trials—in an effort to contain it.

In Los Angeles, the high-profile murder trial of real estate scion Robert Durst has been put on hold for three weeks, a judge announced Sunday. The 76-year-old was arrested and charged in 2015 with his friend Susan Berman’s murder as HBO was airing The Jinx, a documentary series that delved into the disappearance of Durst’s wife Kathie in 1982 and Berman’s murder in Los Angeles 20 years ago. Durst’s highly anticipated trial has been slated to last about five months.

“We are not in a position right now to call citizens in for jury duty in big groups. It’s not responsible,” Michigan Supreme Court Chief Justice Bridget McCormack said at a news conference.

Keep up to date with our daily coronavirus newsletter by clicking here.

Some courts have not yet taken drastic measures, Melkonian says, highlighting a disparity in how various jurisdictions are dealing with the pandemic. In California, for example, while Durst’s case in Los Angeles has been paused, many courts in different counties have not made major changes to their operations. Some have only barred access to people who have recently visited disease-battered countries like China and Italy, or to those who have flu-like symptoms.

The pandemic has resulted in at least 65 deaths in the U.S. and more than 7,000 deaths globally. Millions of Americans have been urged to stay home as cities and states, including Illinois, Ohio, Massachusetts, Washington state and New York City, have ordered bars to close and restaurants to halt dine-in services. Schools and colleges also have been closed.

A judge in Dallas expressed his concerns about delays in court while weighing how to proceed. In a statement on March 12, Dallas County Judge Clay Jenkins said he was suspending civil jury trials, but not criminal ones, because the “inability to guarantee a speedy trial could result in cases being dismissed.”

Advocates also worry the delays will mean defendants have to languish in already-overcrowded jails for months or even years.

“The idea that we might not have jurors really would amplify the problem that already exists,” says Nicole Gonzalez Van Cleve, a criminal justice researcher and Brown University sociology professor. “The pandemic is exerting a real influence on people’s basic rights and dignity and their ability to go free.”

Van Cleve says she fears defendants who can’t afford bail and become desperate will take plea bargains just to get out of jail instead of waiting for their day in court.

“Imagine the fear of being arrested for a really small crime and the next thing you know, your public defender says, ‘Well, if you plead guilty, we can let you go. But if you stay and wait trial, which could be weeks or months or unknown, then you’d have to wait in the jail with a pandemic,” Van Cleve says.

“These aren’t really choices anymore,” she adds. “These are human rights at stake.” 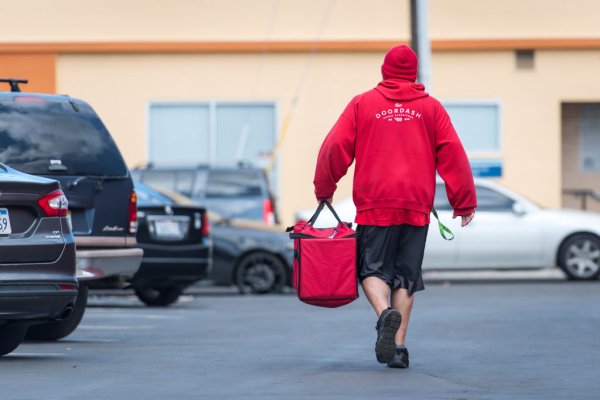 'Is Ordering Takeout Unethical?' 11 Ethical Questions About Coronavirus
Next Up: Editor's Pick