'No One Is Safe.' These Americans Share Their Struggles to Vote

Over the past 10 years, at least 24 states have enacted new restrictions on voting, including requiring voters to show photo IDs and reducing time for early voting. Millions have been purged from voter rolls. State officials say the measures prevent voter fraud and keep registration lists updated. Voter advocates say the intention is to suppress voting, particularly in black and low-income communities. (Several studies have concluded that U.S. voter fraud is extremely rare; the Washington Post said it found just four cases from the 2016 election.)

The Voting Rights Act prohibited jurisdictions with histories of racial discrimination from changing voting rules without federal approval. Since that provision was struck down in 2013 by the U.S. Supreme Court, more than 1,600 polling sites have closed, according to the Leadership Conference on Civil and Human Rights.

Larry Harmon outside of his home in Kent, Ohio, on Aug. 4, 2017.
Maddie McGarvey

U.S. Navy veteran Larry Harmon Sr. did not vote for at least six years. When he returned to the polls in 2015, he learned he had been struck from Ohio’s voting rolls. Because of a uniquely aggressive practice of purging voters who fail to vote in a single federal election cycle, Ohio had started sending notices in 2010 to roughly 4  million people who had not cast ballots in the previous cycle, eventually erasing from voter rolls those who did not respond to the mailers, according to civic groups. Harmon says he doesn’t remember receiving the notice. In 2016, he joined a lawsuit against Ohio’s secretary of state to challenge the practice, and won. But in 2018, the U.S. Supreme Court ruled Ohio was within its rights to purge Harmon, who has since re-registered to vote there.

“I’ve lived in Ohio my entire life, except between 1974 and 1979 when I was in the Navy. My father and my grandfather were also in the Navy. I never thought my basic right to vote would change. It’s really infuriating. They tell you that you’re fighting for freedom, but whether that’s the case is not true. You think you’re a law-­abiding citizen, and you go to vote and they say, ‘No, you’re not on the list.’ It doesn’t make any sense to me at all. If we can’t vote, we’re not American. That’s what makes us an American—that we actually have a voice that matters. It always meant something to me, and as soon as they took it from me, I was ready to fight for it.”

Crystal Mason made headlines after she was convicted in 2018 of illegally voting in Texas in the presidential election. Mason, who had served time for tax fraud, says she didn’t know the state bans formerly incarcerated felons from voting if they’re on supervised release, as she was. For voting-rights advocates, Mason’s prosecution and the lengthy penalty she faces are meant to intimidate others. Mason, who is free on bail while she appeals, faces five years in prison if her conviction is upheld.

“I wouldn’t have dared try to vote if it was explained to me, if it was in my papers or anything. There’s no way that I would have done anything to jeopardize going back to prison. My dad and stepdad died while I was in prison. I was not able to go to their funerals. I went through a divorce in prison. I missed my kid’s graduation and prom, holidays. I lost two great jobs. I’m fighting for my house. I not only take care of my three kids, but I raised my brother’s four kids. It was devastating, overwhelming and hurtful to leave my kids again, to go to prison for something that I really believed that I had the right to do.”

Eliud Bonilla, an engineer working on NASA’s mission to reach the sun, was falsely accused of voter fraud in 2017 in an online report titled “Alien Invasion II,” published by the Public Interest Legal Foundation. It labeled Bonilla, a U.S. citizen who had been voting since age 18, and thousands of other Virginia residents as noncitizens who had either illegally registered to vote or cast ineligible ballots. A 2019 settlement required the conservative group to apologize and scrub the voters’ names from its website.

“I went through a whole variety of feelings. The first one was shock. Then I became indignant. I am a U.S. citizen by birth. I was born in Brooklyn, N.Y. So were my parents. I worried for my safety and my family’s, because in the world that we live in today, especially the country we live in today, there are a lot of angry people trying to right any perceived wrong on their own.

“This is an emotional topic. Most people do not like to think that there’s cheating in the electoral system. Where I live, there’s a very large Hispanic, Latino population. In Northern Virginia, for years there’s been tension from certain groups that are anti-immigrant.

“It just comes to prove that no one is safe. You’re not shielded from anything—the good or the ugly—in this country. But for better or worse, we’re in a democracy, and if you don’t vote, you don’t count. There’s a reason why there are efforts to try to get you not to vote. If it were not important, no one would care. But this is an indication that it is important. It is sobering that after all these years we find ourselves in the same issues, that in the U.S. we haven’t progressed as much as we should.”

Stacey Hopkins in Atlanta, on Feb. 3, 2020.
Irina Rozovsky for TIME

In 2017, Stacey Hopkins of Atlanta received a notice in the mail telling her to confirm her residential address within 30 days or be dropped from voter rolls. State officials call this “routine and legally required” as people leave Georgia, move counties or die. Hopkins had done none of those things, so the American Civil Liberties Union of Georgia sued the county election board and Brian Kemp, then Georgia’s secretary of state, on her behalf. A settlement allowed Hopkins to vote in the 2018 gubernatorial race pitting Republican Kemp against Democrat Stacey Abrams, who hoped to become America’s first black female governor. Kemp won by 1.4 percentage points; Abrams in 2019 founded Fair Fight 2020, an organization to combat voter suppression.

“Particularly for the black community, voting is sacred. To receive that notice is like an affront. It takes you through a lot of emotions. It’s like going through the stages of grief. It minimizes your existence. It reminds me that in 1776, I would not have been a voter then either. You feel helpless. You feel deceived. If you fight, you fight to keep yourself from being purged. You fight to get your voter registration recognized by the state. You manage to get to the polls, and then they turn around and electronically lynch you. It wasn’t a mistake. It was intentional. It’s about keeping power. This is state-­sponsored violence. There are insidious anomalies that exist particularly when it comes to black voters. This is Jim Crow on steroids. They just evolved and changed in a way so that they’re more subtle with it. But this is no different. They’ve just adapted to a digital age.”

This article is part of a special project about equality in America today. Read more about The March, TIME’s virtual reality re-creation of the 1963 March on Washington and sign up for TIME’s history newsletter for updates. 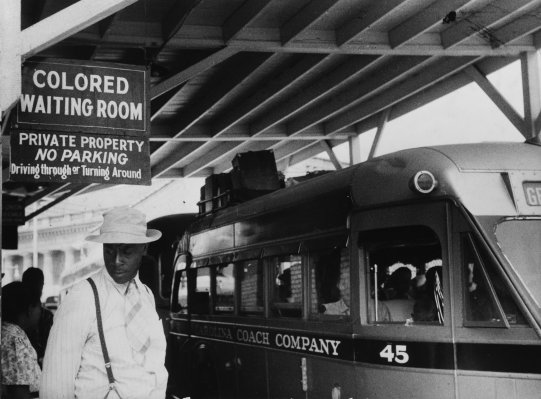 Nearly 6 Decades After the Civil Rights Act, Why Do Black Workers Still Have to Hustle to Get Ahead?
Next Up: Editor's Pick