This article is part of the The DC Brief, TIME’s politics newsletter. Sign up here to get stories like this sent to your inbox every weekday.

Every two years around this time, the federal government’s top internal watchdog releases its comprehensive review that might as well be known as What’s Really Not Working.

Insiders (and journalists) love to rail against Washington’s favorite specters — ”waste, fraud, abuse and mismanagement” — and this thick binder of jargon offers those truly in search of such ghosts clear evidence how and where to find them. Unfortunately, the biggest problems are often embedded in politically untouchable programs, popular initiatives or sprawling dilemmas, such as the drug-abuse epidemic in this country. Of the 35 buckets of trouble identified in 2019’s version of this report, auditors found only seven improved in the two years that followed.

A prominent newcomer to the GAO list this year is the popular small-business lending program known as the Paycheck Protection Program, launched during the early days of the pandemic-induced economic crisis. Close to $1.5 trillion has been allocated for these loans that, if companies keep their workers, they can keep without paying back; basically, it’s free money to firms to keep their workers off the unemployment rolls.

In the rush to get the money out the door, the program was ripe for fraud, as GAO has noted in previous reports. In September, auditors spotted that 3,000 loans totalling $156 million had gone to potentially ineligible borrowers. On top of that, the government agency running the loans, the Small Business Administration, refused to cooperate with GAO auditors and its own internal auditor said it couldn’t certify the year-end books because of incomplete information, according to the GAO mega-study.

That’s not to say it’s entirely the SBA’s fault. As we noted last year, the body’s entire pre-pandemic budget was a relatively paltry $1 billion. Its responsibilities grew very quickly with insufficient corresponding resources to provide necessary oversight to the money it was now in charge of distributing.

But these are timely observations given that Congress right now is at work on another pandemic-relief package that includes $7 billion more in cash for the very same Paycheck Protection Program — one already found to be highly at risk for fraud and without adequate oversight.

Some of the problems flagged in the GAO report have improved since the last version of the critique. The Pentagon got one of its problem children removed from the list before publication by reducing the number of leases it had on the books for facilities that it wasn’t using. For instance, in the D.C. area alone, the Army reduced its footprint from almost 4 million square feet of office space in 2011 to about 1 million by mid-2019, after the last report came out. And concerns over Department of Interior programs were scaled back in the report after more than 180 steps were taken to change safety and enforcement protocols for off-shore drilling programs.

Others will require a coordinated response from Congress and the Biden administration. For instance, substance abuse is highlighted as a new area of concern; the authors note that there’s been a leadership void on the problem, a lack of coordination in implementing the existing laws and poor tracking of programs and costs, both fiscal and human. Two other areas relatively new to GAO’s purview — the government’s response to public health emergencies and criminal justice reform — were flagged as likely challenges that will merit a fuller discussion when the next version of this report lands in Washington come 2023. 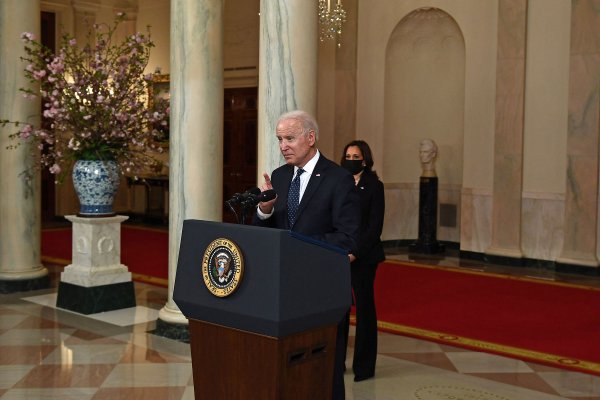 His Predecessors Dodged Race. Biden Embraces It
Next Up: Editor's Pick