The murders of George Floyd, Breonna Taylor, Ahmaud Arbery, and Rayshard Brooks offer new reminders of ongoing anti-black violence, and have outraged millions. This time, though, calls for justice have spread further than usual—around the world and across our culture. Public sentiment has changed dramatically—in two weeks, American voters’ support for Black Lives Matter increased as much as it did in the previous two years, and BLM is now one of the most popular political entities in the country.

Symbolic change is also surging. Statues of bigots and slavers have toppled in Antwerp and Virginia. NASCAR banned confederate flags and Paramount abruptly canceled the television show “Cops” after 32 seasons. Virtually every major company has released statements on anti-racism, and events like #BlackoutTuesday own the social media landscape.

Some of these displays seem authentic; others ring hollow. Consider companies that tweet out “Black Lives Matter,” but have 100% white corporate leadership, Instagram influencers who treat protests like “Coachella pt 17,” or the NFL Commissioner—who released a statement condemning racism, but did not name Colin Kaepernick, the quarterback banned by the league for peacefully protesting that same issue. These token gestures smack of hypocrisy and cynicism in a moment that requires moral clarity.

In the context of anti-racism, shallow support like this is called “optical allyship;” more broadly, it is one flavor of “virtue signaling.” Since this term was coined in 2015, people have used it to shame others for moral grandstanding: advertising their moral positions for the purpose of self-promotion. This sort of virtue signaling seems like selfishness covered in a thin shell of goodness, a way to score social points rather than by doing the work of real reform. In one set of studies, Ryan Carlson and one of us (JZ) found that people judged selfishly motivated moral gestures more harshly than doing nothing at all.

It’s critical to question people whose most radical act is temporarily changing their profile picture. It’s critical they follow their words with action; the time for talk has passed. But focusing solely on virtue signalers obscures their most important role. Like radio waves, the signals they send are received by someone, and those receivers matter, too.

Two key insights about social behavior are relevant here. First, people conform to others’ actions and opinions; they often say what others say and do as others do. Second, when it comes to many issues, most people don’t know what most people think—meaning that conformity involves a surprising amount of guesswork. Imagine 100 individuals in a pitch-black gym, each trying to join the rest of the crowd in a chaotic multiplayer game of Marco Polo. People will gravitate towards whoever they can hear, clumping around the loudest voices. Opinions can work this way: when a particular viewpoint gets a lot of attention, people assume it’s popular, and shift towards it. We receive signals, and are changed by them.

This means social information can be a powerful force for social change, because people look to each other when deciding how to express themselves. For example, Chris Crandall and colleagues surveyed people to find out how socially acceptable they thought it was to be prejudiced against a variety of groups, ranging from child molesters to librarians. They also asked respondents to report their personal attitudes towards these groups. The two ratings were almost perfectly correlated: people reported as much prejudice as they believed was socially acceptable.

As social norms shift, individuals shift with them: adopting popular opinions and behaviors, and dropping ones that fall out of style. Norms are especially powerful as they gain steam. In one set of studies, Gregg Sparkman and Greg Walton presented diners in a cafeteria with evidence that 30% of the U.S. population was vegetarian, or that 30% of the population was newly vegetarian. People who learned about this second, “dynamic social norm” were twice as likely to order a meatless lunch themselves. They saw not just where the crowd was, but where it was going, and didn’t want to be left behind.

Conformity can seem spineless, but in fact it reflects an ancient yearning to be part of something greater than ourselves—a smart yearning, given the many social advantages of coordinating and cooperating with others. It goes deeper than words, sometimes changing what we see, what we value, and how we behave, even privately. And no matter what we think of this, we are and will always be a herd species, more prone to move together than alone. Social norms will continue to change, and we will change with them.

This clarifies why signaling is so important. Not every person tweeting their support of a righteous cause will follow through. But no matter their motives, when many people speak out, their voices have a powerful effect on receivers. The last few weeks have made it clear that anyone opposed to racial justice is indeed in the minority, and that people who believe Black Lives Matter have plenty of company. Collective outrage has become a social norm; coupled with the leadership of local organizers, it has yielded a phenomenal groundswell of action.

Signaling and conformity are not inherently positive. In 2016, the U.S. elected a president whose campaign was jammed with racist talking points. Prejudice subsequently increased, specifically toward groups he targeted (e.g., Muslims, immigrants). Months later, white supremacists took to the streets in Charlottesville, VA. As the author and former congressman Bakari Sellers put it, the shocking thing was not that they marched, but that they did so without white hoods, unafraid to show their faces. They had received a signal that their opinions were more popular than they had realized, and they felt comfortable with expressing their prejudice.

The difference today is that the signal we are sending and receiving actually is virtuous: a demand to acknowledge and redress centuries-old inequality and violence. People are publicly demanding justice and declaring that Black lives matter. We can and should use their signals as anchors, holding them accountable for acting accordingly. But we should also realize the power signals have in and of themselves, in helping people locate each other—in this case, on the path to change.

Most Popular on TIME
1
Judge Orders Extradition of Teen Charged in Kenosha Shooting
2
An Iconic Star Wars Character Just Showed Up in The Mandalorian
3
Yes, Texas Could Go Blue This Year 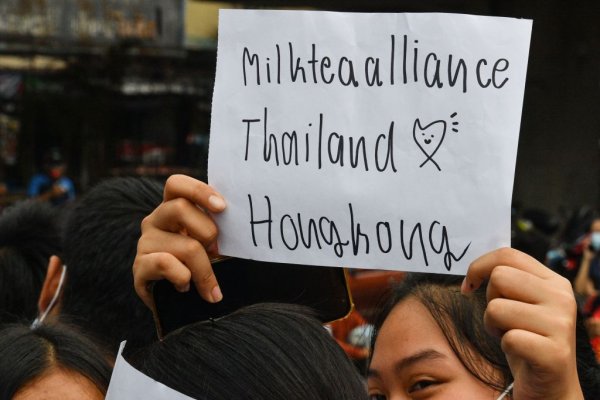 The Milk Tea Alliance Is Uniting Pro-Democracy Activists
Next Up: Editor's Pick